Now, there's something you really don't see every day: Andrea Martin in a leotard, singing full-throatedly, while being held upside-down from her ankles by a moustachioed man on a trapeze.

This surprising, show-stopping routine by the 66-year-old SCTV star is the best reason to see Pippin in its joyous new revival on Broadway, a highly entertaining marriage of classic American musical theatre with contemporary Québécois circus.

Wicked composer Stephen Schwartz's original breakout hit – slightly creaky and stinking of the early 1970s – is aired out and given fresh life in director Diane Paulus's new production. This allegorical meta-musical concerns a travelling troupe of Players putting on a play about the son of Charlemagne, Pippin, and the perils of his pursuit of happiness. He wages war, plots revolutions and tries out domestic life before finally being led toward an "extraordinary" ending crafted by the demonic Leading Player – a part originated for Ben Vereen, but here played by rising female Broadway star Patina Miller with bulging eyes and biceps and jazz hands that shoot out like shivs.

The gender of the Leading Player isn't the only thing flipped around in this revival by Paulus, however. Now the Players are a circus troupe with a heavily Canadian flavour. Gypsy Snyder of Montreal's Les 7 doigts de la main, pioneers of circus on a human scale, is in charge of the creative contortions and breathtaking tricks that substitute for or complement the choreography, created in the style of Bob Fosse by Chet Walker.

The chorus is stocked with beefy graduates of Canada's National Circus School, while the costumes – a mix of scary and sensual – are by frequent Cirque du Soleil collaborator Dominique Lemieux.

What makes Paulus's production particularly lively and exciting on a performance level is watching Broadway types trained in song and dance attempt circus tricks such as balancing acts and acrobatics, and vice versa. It can be deliriously delightful to see the talented cast leaping far out of their comfort zone – and making successful landings.

The prime example is when Martin – playing Pippin's grandmother Berthe with impeccable comic timing – ends an audience sing-along of No Time At All by ripping off her robe to reveal a circus leotard. Yannick Thomas, a strongman with a French accent and mischievous stage presence, then carries the comedienne up into the air.

After a couple dainty moves that tease the audience, Martin (who first made a name for herself in the legendary 1972 Toronto production of Schwartz's Godspell) moves into some advanced acrobatics that are genuinely impressive. If she doesn't get a Tony Award nomination for this daring-do next week, I'll eat my ringmaster's hat.

Pippin is well stocked with comic talent: Terrence Mann is a chuckleworthy Charlemagne, while Rachel Bay Jones is sweet-and-sour as the love interest Catherine; Matthew James Thomas, meanwhile, brings a sweet face and contemporary sound to the title character.

While the score can sound dated, Schwartz's message about the dangers of believing you're "extraordinary" is certainly one that, if anything, resonates even more strongly in today's everybody-gets-an-award society.

Back in 1972 when the show had its Broadway debut, there were tensions between the darker version of the show pushed by original director and choreographer Bob Fosse and the softer intentions of Schwartz. Paulus's production tips toward sweetness and sentimentality – and that's just as well, because, as a show that's skeptical of spectacle, Pippin suffers when compared to more cynical fare such as Kander's and Ebb's Chicago.

The ossified remnants of Fosse's vision stick out here. There's supposed to be a disturbing edge to the Leading Player, like the Emcee in Cabaret, but the sheer thrill of the circus keeps steering the focus away from that. The famous "Manson Trio" dance, for instance, is completely upstaged by an acrobatic routine going on behind it; sideways shuffling and rolled shoulders can't compete with people plummeting off poles.

With Cirque du Soleil having colonized Las Vegas, it's great to see the lesser-known Les 7 doigts de la main getting this toehold on Broadway. They've got a number of theatrical hybrid projects in the works – notably, a collaboration with Denys Arcand-muse Rémy Girard that will be unveiled at Montreal's Théâtre du Nouveau Monde next fall. Pippin is certainly a promising sign of things to come. 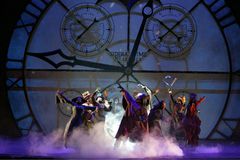 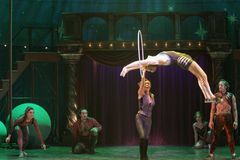