Playwright and actor Adam Lazarus's new solo show, Daughter, is an exercise in testing the limits of an audience's tolerance when it comes to misogyny – and the exact moment where a room full of people entirely agrees that masculinity has crossed over into toxic masculinity may surprise you.

If Daughter ultimately ends up feeling more like a social-science experiment than a play, it has nevertheless landed on the stage at the right time to be a provocative discussion continuer – not starter, of course, because the conversation is well under way at the moment owing to that ever-lengthening list of prominent men accused of crossing the line.

Lazarus's show begins with the actor, dressed in bee wings, talking about his six-year-old daughter, demonstrating how she dances and also how he dances with her to songs such as Everything Is Awesome.

It's all very charming and remains so as this seemingly sensitive new-age guy moves on to describe his desire to protect his daughter at all costs after her difficult birth, which he recounts in excruciating and perhaps excessive detail. At this point, Daughter feels like a stand-up routine, if the comedian were trained in clown.

Soon, however, Lazarus mentions a moment of bad parenting on his part – when, after her 12th visit to his bedroom one night, he picked his daughter up, threw her back into her bed and pushed her down into it, hard. It was a mad, sleep-deprived action – and he asks the audience if this was okay or not. While at the performance I saw (a final preview), the audience largely did not believe it was okay, we were nevertheless largely forgiving of his lapse.

Lazarus is never 100-per-cent apologetic about any of this – and he keeps seeking approval even as what he describes gets decidedly worse. The audience's capacity for forgiving a charismatic, artistic man eventually disappears, but on the night I was there it happened bit by bit and almost seat by seat.

Since Lazarus speaks in the first-person throughout Daughter and his bio notes that he has a daughter and a son, you'd be forgiven for assuming that this is a confessional one-man show. A man, in the time of Harvey Weinstein, exploring his complicity in a culture that allows sexual harassment and sexual assault to happen.

But that would be a different show than Daughter, which, in the parlance of the press release, "exists in the liminal space between autobiography and fiction" – a space that is very much in keeping with our times, from the reality-TV host who is now the President of the United States down to the novels of Sheila Heti.

And yet, at a certain point, it eventually becomes entirely clear Lazarus has crossed the Rubicon – and, drawing on his work as a bouffon artist and "Toronto's favourite nasty clown," he gleefully sloshes around in toxic fiction.

That gleefulness is an aspect of Lazarus's work that's never really appealed to me – and, in this case, I felt the ending let both him and the audience off the hook, in a way.

But my wife, afterward, told me she was relieved Daughter didn't end in a place where the audience was left feeling sympathy for Lazarus's character; she's been left feeling that way about too many bad men, real and fictional, in her time.

As a performance, Daughter – a co-production of the Theatre Centre and QuipTake with Pandemic Theatre – is undoubtedly impressive. Lazarus is natural and alive throughout under the direction of Ann-Marie Kerr (who is credited as co-creator of the show along with Jivesh Parasram and Melissa D'Agostino). When one audience member walked out fairly early in the show, Lazarus acknowledged this, shrugged and said: "I don't blame her." This got a big laugh.

By the end of the show, however, I wondered if that earlier exiter had the best moral compass of us all. Go see Daughter to find out where yours kicks in. 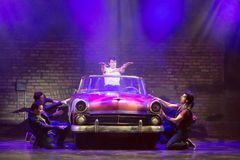 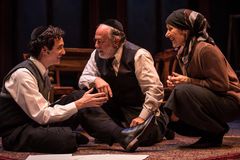 Hottest tickets in town: Five things to do in Toronto
November 8, 2017 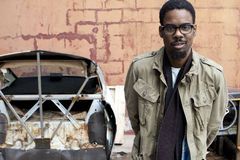