How about a nice, light romantic comedy about the inevitability of environmental destruction?

Marine Life, Rosa Laborde's charming new play at Tarragon Theatre, is perhaps the most pleasant hour and a half you'll spend contemplating a) whether the guy and girl will end up together; and b) how climate change and rising oceans may soon return humans to the watery depths from which we emerged billions of years ago.

In the play's opening scene, environmental activist Sylvia (Nicola Correia-Damude) meets a corporate lawyer named Rupert (Matthew Edison) down by the river – after he casts his fishing rod without looking behind him.

"You hooked me," Sylvia says, holding on to her neck.

The whole nature of their opposites-attract relationship from this meet-cute on is beyond contrived, indeed nearly mathematical in construction.

She's obsessed with protecting marine life; he's decided to de-stress by taking up fishing. She's fighting to eliminate microplastics from the world; he has a, well, very personal connection to plastics. (I won't spoil the reveal.)

You're either going to find this way too whimsical, or you'll relax and embrace the playfulness of Laborde's plot and the screwball snappiness of her dialogue, as I quickly did.

There's a third character that makes Marine Life a love triangle of sorts (a comic cousin of the one in Laborde's 2006's break-out hit, Leo). That would be Sylvia's overly attached brother, John (singer-songwriter Justin Rutledge), whom she cares for. Get ready for another ironic juxtaposition: While Sylvia is out trying to save life as we know it, John is often at home trying to end his own.

When he's not attempting to kill himself in a variety of creative and prosaic ways, John is an otherwise lively character – preferring to be called Juan out of identification with the Mexican father, a singer in a mariachi band, who left his depressed mother when he and his sister were kids. Sometimes, John/Juan believes his ancient fish ancestors are coming to drag him back underwater; sometimes he breaks into offbeat songs, accompanying himself at the guitar.

The mix of dark and light in John/Juan would sink most actors, but Rutledge, refreshingly, keeps his character at arm's length and somehow makes this unbelievable bundle of quirks and complexities work.

After a freakish storm brings the three together, John/Juan and Rupert clash and compete for Sylvia's affection, secrets are revealed – and the dam that has barely been holding magical realism back breaks, leading to a sea voyage and the mystical appearance of a baby beluga (and a few strains of Raffi's famous song).

Laborde, directing her own play, keeps it all afloat, tuning the performances to the same endearingly oddball channel. Correia-Damude anchors the show as Sylvia, making the fanatic into a romantic lead you can root for, while Edison bobs around the stage in an enjoyably mischievous performance as a man all too eager to admit his faults.

Trevor Schwellnus's circular set, onto which he projects a giant picture of the Earth, hovers amid a constellation of plastic takeout containers. It also features a bizarre see-through plastic bench that always seems a little too small to be useful – and yet, the actors find ways of squeezing onto it or under it. That's how I felt about Marine Life over all – it shouldn't work, but it does in its own idiosyncratic way.

Review: Jabberwocky goes down rabbit hole to talk about what it means to be a man
November 21, 2017 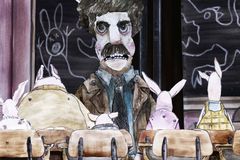 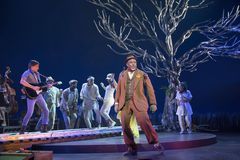 Theatre Review
Review: trace shines a light on the things you can’t leave behind
November 17, 2017