There are usually two ways to treat bestiality. Either it's a source of comedy – think of Gene Wilder and the sheep in Woody Allen's Everything You Always Wanted to Know About Sex – or it's used to elicit horror and disgust, as in the PM-and-pig episode of the Netflix series Black Mirror.

The late Edward Albee's The Goat, or Who is Sylvia? has its share of comedy and disgust, to be sure. But ultimately his 2002 play – receiving a potent revival by Toronto's Soulpepper Theatre – asks us to seriously consider a man who has become sexually and emotionally involved with the shaggy ruminant of the title. And it's not meant to be some kind of allegory. As Albee told me in a 2006 interview, "This is not a metaphorical goat, it's a real one; and it's not a metaphorical love affair, it's a real one."

The play opens with Martin being interviewed by Ross for a television profile. Martin, just turned 50, has become the youngest winner of the Pritzker Prize – architecture's Nobel – and is about to embark on a multi-billion-dollar project, designing a new city in the U.S. Midwest. But after his distracted behaviour scuttles the interview, Ross wrests from him the bizarre reason: During a trip to the country six months ago, in search of a farmhouse property, Martin locked eyes with the sweet Sylvia and became hopelessly besotted.

When Stevie learns that her loving husband of 22 years has taken a goat for a mistress, she reacts with a mixture of incredulity and rage, alternately making bitter wisecracks (she's never been unfaithful to him, "not even with a cat") and trashing their immaculate living room. She finally lets loose with a series of outraged howls, that are themselves more bestial than human.

That scene, brilliantly played in all its tragic absurdity by Raquel Duffy and Albert Schultz under Alan Dilworth's precise direction, captures the gut-twisting discovery of betrayal like few others. It's the kind of ferocious marital confrontation we'd expect from the playwright who gave us Who's Afraid of Virginia Woolf?

In other respects, though, Martin and Stevie recall the patrician older couple of A Delicate Balance – also being staged later this season by Soulpepper, as a two-part homage to Albee, who died last year. We first see the pair blithely exchanging witticisms, doing what Stevie calls their "Noël Coward bit," and even during their big fight they continue their habit of correcting each other's grammar.

This and the characters' other peculiar pedantic tendencies seem to be Albee's own way of coping with his strange subject matter, as do the occasional in-jokes: silly allusions to fellow absurdist Arthur Kopit's comedy Oh Dad, Poor Dad… and to Albee's own Tiny Alice. There's also a self-conscious reference to the Eumenides, the Furies of Greek mythology, to cue us that the play is structured like a classical tragedy.

All these touches lend an artificiality to the dialogue, but they don't diminish the power of the play's core scenes: Martin and Stevie's battle, followed by Martin's argument with his sensitive gay son, Billy. In the latter scene, Albee goes beyond bestiality into more troubling perversions, touching upon incest and pedophilia. At the same time, Martin's casual denigration of his son's sexual orientation reminds us how a lingering notion of perversity still fuels homophobia.

Martin has often been played by pensive actors – Bill Pullman in the original New York production, Damian Lewis in its London revival last spring – but Schultz brings an earthiness to the role. Bearded, narrow-eyed, he suggests, dare we say it, a satyr-like quality. At the same time, his romantic fixation is never in doubt as he tries hopelessly to articulate his finer feelings for Sylvia, whom he insists has a soul.

Duffy, meanwhile, conveys all of Stevie's tangled emotions, from incomprehension to horror and revulsion, as she slowly comes to the devastating realization that she no longer recognizes the man she has always loved.

As Billy (his name is just one of the play's many goat jokes), a slump-shouldered Paolo Santalucia appears as fragile as the ornaments that his mother smashes in her fury. Derek Boyes is suitably grey-haired and stuffy in the underwritten role of Ross, who is mainly there to represent offended middle-class morality.

Dilworth's production is 90 minutes of pure intensity, slowly building on a stylish set by Lorenzo Savoini that resembles, appropriately enough, an interior out of Architectural Digest. In the centre is a sleek white coffee table that becomes, at the climax, a bloody altar. Without revealing anything, let's just say that on opening night that final scene – another nod to Greek tragedy – provoked gasps from an already rattled audience.

At that point, Albee does give us a metaphor – for the uncontrollable animal instincts that lurk beneath civilized human behaviour. The Goat asks us to consider them, and what we, as a society have chosen to condone or condemn. Albee himself does neither, he only poses some disturbing questions.

The Goat, or Who is Sylvia? continues to Nov. 18 (soulpepper.ca). 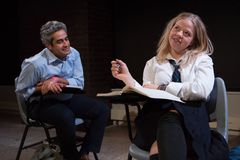 Theatre Review
Review: Bat Out of Hell is a rock 'n' roll force, but plot gets lost in the spectacle
October 26, 2017 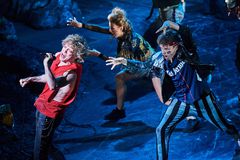 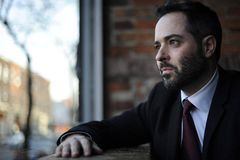