Broken Social Scene, the vast Toronto musical collective founded in 1999, has gradually pulled more and more theatre artists into their indie orbit over the years.

(Leslie) Feist worked with the Old Trout Puppet Workshop and toured with the Simonovitch Protégé Clea Minaker; Brendan Canning collaborated with director Brendan Healy at the SummerWorks Festival; Jason Collett made his acting debut a few years ago in a production of Cowboy Mouth in the back of the Cameron House.

Now, since the opening of the new Crow's Theatre building in the east end, it seems the members of Toronto's legendary rock 'n' sprawl band have their own theatrical clubhouse.

In its first year of operation, Crow's has hosted Torquil Campbell's sizzling solo show True Crime last spring – and now is home to BSS co-founder Kevin Drew's debut as a playwright, a show called A&R Angels that he also stars in.

Under Drew's weak stage effort, however, we must draw the line on the band's take-over of Toronto's theatre scene – before they break it, too.

A&R Angels imagines an afterlife where angels write songs and then send them into the subconscious of musicians.

Loud Angel (Kevin Drew) and Soft Angel (Ben Kowalewicz, of Billy Talent infamy) were once the real behind-the-music creators of 22 No. 1 hits – but lately, they've fallen into a slump.

Part of their job is to pause time and play songs for people who are on the verge of suicide, songs that will persuade them to put down the pills or the pistol.

But when we meet them in the first scene, Loud and Soft fail again for the 11th time in a row – indeed, before they've even reached the chorus of a song called Apology People, a man (Stratford Festival's Gordon Miller, who has a series of silent cameos) is hanging from the ceiling.

Sir, the fellow who runs the A&R – artists and repertoire – department in the sky, played by Maurice Dean Wint, tells them they've got two more chances to write a tune and save a life or they're out of a job.

That's the situation – and, with A&R Angels, Drew falls into many of the traps people writing for the stage for the first time do: First and foremost, coming up with a situation rather than a play.

Loud Angel is clearly in an artistic crisis – one that Drew has said reflects his own a few years ago as he grew depressed by the digital world's treatment of art.

However, little of whatever is bugging him is articulated in a clear way in scenes that play out as tiresome circular bickering between the two Angels, or between Loud Angel and Sir, or Sir and his assistant, Richard (Graham Cuthbertson).

Occasionally, a particularly, vividly crass bit of badinage or shard of music-industry satire breaks through to the surface, but most of the dialogue is empty verbiage, telling us what we already know again and again.

A&R Angels spins its wheels like this for an hour, not developing the characters or the relationships between them, while the problematic stakes of the show – can these two white dudes start secretly dominating the charts again? – sit there to spoil.

When he's not behind a microphone singing (and there are only two songs in the show), Drew has little in the way of stage presence. He's not really inside the character of Loud Angel, but not outside of it in an interesting way either – and all that comes across is the character's annoying narcissism.

I did like Kowalewicz's sweet neuroticism as Soft Angel, an ironic title for his character given his day job as front man for a screamo band. But he, as with all the other characters, is really only there to be a sounding board for Loud Angel's barely coherent whining.

The only suicidal person to not be treated as a morbid punchline (played by Ngozi Paul) comes into the play too late. Even then, she exists explicitly as a "muse" to Drew's character, rather than a human being we know enough about to care whether she lives or dies.

That broken final scene of the play gets so stuck in a rut of fumbling exposition – "I don't understand," one character says; "I don't get it," another says in response – then an alarm goes off, apparently just to move the show forward.

The trappings of artistic director Chris Abraham's swiftly moving production are top notch. Julie Fox's set is a gorgeous box that contains all the suicide sites of the world, as well as an otherworldly sauna – and the funniest joke in the whole show is the Crocs with white socks she has Loud Angel wear there. Thomas Ryder Payne's sound design is sublime and Kimberly Purtell's lighting is truly heavenly.

In the end, you can't really fault Drew for trying something new – but Abraham might want to mull over his motivations for mounting a script so clearly not up to Crow's standards. 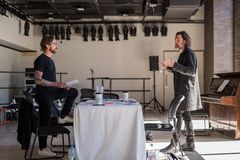 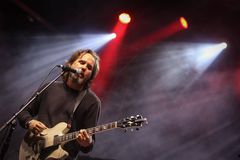