The word "Ipperwash" immediately conjures a tragic flashpoint in the history of Indigenous land claims in Canada. The occupation of a provincial park by protesters in 1995. The death of Dudley George. The trial of the Ontario Provincial Police sniper who shot that young unarmed First Nations man – and the subsequent provincial inquiry into what happened.

Falen Johnson's new play of that name, however, is a quieter sort of inquiry into Ipperwash – one in which no one talks about what happened in 1995. Instead, her drama focuses on what happened five decades before George was killed – and what is happening there, now, two decades later.

Beatrice King (PJ Prudat) is a veteran of the Afghanistan war who has taken a civilian job with the Department of National Defence to help in the cleanup of the former site of Camp Ipperwash – land that was expropriated through the War Measures Act in 1942 for a military base. It was only fully returned to the Chippewas of Kettle and Stony Point First Nation as part of a $95-million federal settlement in 2016.

Bea, who is Indigenous herself, from New Credit First Nation, rents a nearby house owned by a Second World War veteran named Tim Cloud (Jonathan Fisher). Cloud's family was among those displaced back in 1942; he returned from fighting for Canada to find the land he farmed behind a fence, his house in a new location, his mother and sister dead (of what, Johnson does not clearly explain in the play).

Similarly, Bea has returned from her service altered – and wondering exactly what she was fighting for overseas. Soon after arriving at the former site of Camp Ipperwash, she sees a young girl (Samantha Brown) playing in sand where there may still be unexploded ordnance – but as she approaches, the child runs away.

Slip (James Dallas Smith), Tim's grandson and self-appointed security guard for the area, confronts Bea and asks why she's yelling at a hole in the sand. He didn't see a girl at all.

Did Bea actually encounter a kid from the local reserve? Or is she having flashbacks from Afghanistan? Or is there a ghost haunting Ipperwash and the house she is renting?

Slip and Bea are initially at odds with one another – he's skeptical of her desire to help, she finds him overly hostile. But the two gradually form a bond as they banter each time she passes his security checkpoint on the way to and from work. Both Prudat and Smith are charming in their roles and have an endearing chemistry, even if Johnson's play never fully goes in the direction of romance.

It doesn't go very far in any direction, dramatically – Bea gradually learns the history of the home she's staying in; Slip tells her the larger history of the area; Tim grapples with long-suppressed anger and grief.

I appreciated the simmering nature of the play, which premiered at Ontario's Blyth Festival last summer and is now being staged in a revised version at Native Earth Performing Arts in Toronto. But, at times, the heat seems to go off completely.

Directing her own play, Johnson lets the pace slacken too much – and what initially seems contemplative turns merely sluggish, even the supernatural elements of the play not quite chilling or thrilling. I found myself in the unusual circumstance of wanting less exposition, but more information – and needed a good Google when I got home to flesh out exactly what happened regarding Camp Ipperwash. If you buy a ticket to Johnson's play, you might want to do that research before you go.

Review: COC reworking of Abduction from the Seraglio imprints slowly but surely upon your moral compass
Subscriber content
February 8, 2018 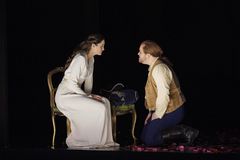 Jackie Maxwell is right where she wants to be: in the director’s chair
Subscriber content
February 7, 2018 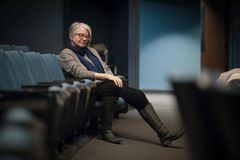