Who knew that the Cree language and samba went so well together? The (Post) Mistress, playwright and composer Tomson Highway's one-woman musical, opens with a song where the rhythms come from South America and the lyrics come from Northern Canada.

Surtitles in English and French appear above the stage if you want to know what's being said, but the message comes through loud and clear in Cano's sensual performance.

"Cree, if you set it to samba, it sounds a lot like Brazilian Portuguese – with its hot, sexy syllables," Marie-Louise explains afterward.

Set in 1986, The (Post) Mistress is a show about love and letterboxes that Highway has been touring around for a number of years. An album of its musically miscegenous songs was nominated for a Juno Award for Aboriginal Album of the Year in 2015 (losing out to Tanya Tagaq's Animism).

Marie-Louise sorts the mail at a Canada Post outpost in Lovely – a fictional town in Northern Ontario near another fictional town with a giant penny called Complexity. (Highway lives part of the year near Sudbury, the obvious inspiration.)

Afraid of flying, Marie-Louise has spent the 49 years of her life in the general vicinity. The farthest she's ever travelled is to Ottawa. Instead, the world visits Marie-Louise – in the form of missives sent to the 1,000 residents of Lovely from glamorous places such as Brazil, Argentina, New Orleans and Toronto. She holds the envelopes up to the light, reads through their skins, and sings songs that channel the loves – passionate and unrequited, married and adulterous – spied within.

The (Post) Mistress had been delivered, better late than never, to Toronto as a co-production between Pleiades Theatre and Théâtre français de Toronto, which is presenting it under its French title, Zesty Gopher s'est fait écraser par un frigo. (In Cree, it's known as Kisageetin.) It plays until Oct. 23, in French and Cree and with English surtitles, then for another week in English and Cree with French surtitles.

Cano is a lovely performer in all three languages. She exudes warmth from head to toe – developing a genuine rapport with the audience few actors know how to conjure. She's the consummate cabaret artist, even though she is playing a fictional character.

The (Post) Mistress's French title – Zesty Gopher has been crushed by a fridge – gives a hint that Highway still has his cheeky sense of humour. But this is a softer, gentler work than the early plays for which he is best known, The Rez Sisters and Dry Lips Oughta Move to Kapuskasing. Like his hero Michel Tremblay, Highway seems to have mellowed with age.

As a drama, The (Post)Mistress ambles amiably – its roots as a cabaret showing. There's a twist in the second act that contradicts what came earlier, instead of being a satisfying reveal. I think it would be stronger if Marie-Louise put all her cards on the table right away.

Highway, a Cree novelist and playwright originally from northern Manitoba, is, of course best known for the aforementioned two plays he wrote in the 1980s that took the country by storm. Their success provided a foundation for the vibrant indigenous theatre scene – or what Highway calls "Native show biz!" – that we have today.

But theatre has proved a frustrating career for Highway since the highs of the 1980s – writing large plays with many indigenous characters that were difficult to produce. For more than a decade, he's railed against the "political correctness" that keeps many theatre companies from staging his work without First Nations actors – and retreated to cabaret.

In The (Post) Mistress, you see Highway's idea of beauty – a Peruvian-Canadian from Northern Ontario singing to a Brazilian beat in an indigenous language. It is a beautiful vision. 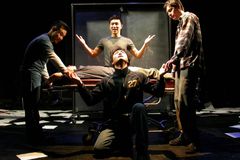 Review
Wallis Giunta’s star shines brightly in Opera Atelier’s Dido and Aeneas
October 21, 2016
Harrison James is a dashing star on the rise at the National Ballet
October 20, 2016
Follow J. Kelly Nestruck on Twitter @nestruck
Report an error Editorial code of conduct
Due to technical reasons, we have temporarily removed commenting from our articles. We hope to have this fixed soon. Thank you for your patience. If you are looking to give feedback on our new site, please send it along to feedback@globeandmail.com. If you want to write a letter to the editor, please forward to letters@globeandmail.com.
Comments