Written and directed by Morris Panych

At the Tarragon Theatre in Toronto

At the Panasonic Theatre in Toronto

Sextet is a sex farce as envisaged by playwright Morris Panych. That means no sex, a little farce and loads of existential angst.

Two violinists, two violists and two cellists check into a motel during a tour of Schubert and Schoenberg. When a blizzard traps this sextet for an extra night, all their unrequited love or lust comes pouring out.

Harry (Damien Atkins) is a closeted gay man who is infatuated with the handsome and vapid Dirk (a very funny Matthew Edison); Dirk, meanwhile, has developed a spontaneous attraction to Sylvia (Laura Condlln), who he suspects may be a lesbian; Sylvia, naturally, has a long-standing crush on her gay best friend, Harry.

In addition to this self-contained triangle of sexual dissatisfaction, there's married couple Gerard (Bruce Dow) and Mavis (Rebecca Northan) – who each have complicated physical dysfunctions and have decided to experiment with polyamory in an effort to please the other. This leaves Otto (Jordan Pettle); born from in vitro fertilization and obsessed with chivalric love, he wants Mavis as his own.

Ken MacDonald has designed an unnerving set for these six stories to play out side by side – six skinny rooms with thin doors and narrow beds, blurring into each other. It's like a standard sex-farce set on fertility drugs. Each has a clock radio set to a different time, placing this play in a semi-surreal universe.

Panych's production is equally unsettling at first – a stream of short, staccato scenes and epileptic lighting cues. We barely get a moment with one set of characters before being yanked away to another. Lines of dialogue overlap or line up, but there's more discord than harmony. If the structure is intended to be musical, it moves in spurts and shudders like an atonal symphony.

I wrote down many of the cleverest epigrams, but, looking over my notes, it's hard to remember which violinist was behind which witticism. It's always Panych pulling the strings.

The highlight of the play comes when everything slows down for a moment and musicians perform Verklarte Nacht (Transfigured Night), an early composition by Arnold Schoenberg that sets a poem by Richard Dehmel about an unnamed couple walking in the woods at night talking about an unexpected pregnancy.

There's a similar pregnancy of uncertain parentage here that is a main driver of the plot, but the twists and turns are contrived to the point of confusion. The larger problem with Sextet is that few of the relationships really resonate realistically. This group doesn't feel like six colleagues who have been touring together forever, but a group of classical music co-eds conjured out of thin air and sent off on a weekend trip. Despite this production having a dream cast of comic actors, only Condlln truly made me feel her character had a heart and a history in addition to jumpy genitals.

Also playing: I do love New York, but sometimes I suspect it's in a foreign country. Buyer and Cellar, a one-man Barbra Streisand-themed play by Jonathan Tolins, was a critical and popular hit off-Broadway; now on thin, gossipy display in Toronto as part of a North American tour, its big success in the Big Apple seems baffling.

Alex More (Christopher J. Hanke) is an out-of-work, West Coast actor who gets hired to work in a fake mall located in singer, actor and gay icon Streisand's basement. This is a fact that thrills Alex's screenwriter boyfriend, Barry, more than him at first. "I'm not that big a Barbra queen," he says. "I feel about Barbra Streisand the way Jews feel about Passover seder."

Apparently, Streisand really does have an ersatz shopping strip underneath her Malibu dream home; instead of storing her old costumes and memorabilia in boxes, she has them on display in doll shops and antique stores and a "gift shoppe" with a frozen-yogurt machine.

Eccentric, no doubt, and Alex's first interaction with a fictionalized Streisand is fascinatingly bizarre, as the two role-play over the purchase of an automaton. The play holds the promise of an absurdist skewering of celebrity in the vein of Mindy Kaling and Brenda Withers's Matt and Ben. But Buyer and Cellar – what a terrible title! – soon morphs into merely an episode of Lifestyles of the Rich and Famous.

Alex More may share a surname with the author of Utopia, but attempts to find anything deep or philosophical to buy here will leave you empty-handed; neither is Tolins's script cutting enough to be satire.

Hanke is a pleasant enough performer, his Streisand impression funny enough at first that it takes a while for him to exhaust goodwill. Then again: I'm not familiar enough with the ins and outs of Streisand's career and love life to really groove on the script's references to dud husbands and dud films; I'm not really a fan of name-dropping and winking disguised as comedy even when I'm in on the in-jokes, though. Being neither gay nor Jewish, I was not sufficiently pandered to by Tolins's play. Another shot at a stage adaptation of The Little Prince to debut in Calgary
May 12, 2018 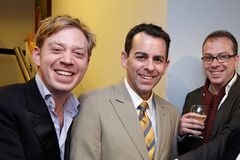