Engaged is W.S. Gilbert without Arthur Sullivan – an 1877 comedy about marriage and money written by Gilbert when he and Sullivan were in the early years of the operatic partnership that would go on to overshadow anything either man wrote or composed individually. In director Morris Panych's deliciously amoral (or viciously clear-eyed?) production of this preposterous and outrageously funny comedy, however, I didn't miss Sullivan's music one bit.

Cheviot Hill (Gray Powell) is the central figure of the piece – described as "a young man of large property, but extremely close-fisted," and continually falling in love at the drop of a hat. His romantic inconstancy is of intense pecuniary interest to two other men: Belvawney (Jeff Meadows), who receives £1,000 a year as long as Cheviot remains unmarried; and Mr. Symperson (Shawn Wright), who shall receive £1,000 a year once Cheviot is either wed or dead.

The first act takes place in the garden of a cottage on the border of England and Scotland where these three English men unexpectedly find themselves because of a train derailment. In their company is also a woman named Belinda (Nicole Underhay), loved by Belvawney and pursued by a mad general. The plot kicks off properly when Cheviot chivalrously saves Belinda from capture by the latter by pretending that he and she have just got married.

This is a kind of prologue for the second and third acts, set a few months down the line in London – where Gilbert's comic confection and Panych's production really get going. Cheviot is now engaged to be married to Mr. Symperson's daughter Minnie (an on-fire Diana Donnelly), but it is unclear whether or not he is legally married to Belinda because of confusion over whether the cottage of the first act lay on the English or Scottish side of the border.

There is a Scottish law, we're told, that if a man and a woman say they are married in front of two witnesses, they are married by law. Pretending is an English thing; in Scotland, alas, words apparently have meaning. (Ken MacDonald's set is dominated by the truthful Scottish thistle in the first half, the deceptive English rose in the second.) Indeed, throughout the play, the English characters – whose only motivation is money – seem uncertain as to whether they mean what they say or not.

Panych encourages a style of acting that is as comically uncertain as their sentiments. In a bravura performance, Powell shows his inconstancy and lack of control with every physical movement, loose-limbed, his arms waving around in front of him and occasionally inching up his inner thighs in lust.

Just as he is professing his love to women within moments of meeting them, Belinda, played with a kind of dazed delicatesse by Underhay, tells men that she loves them with "a devotion that enthralls my very soul" – and yet refuses to commit until she sees a bank balance. Meadows and Wright round out the core ensemble with sly wits and a knack for slapstick.

It was suggested to me earlier this year by director Peter Hinton that "Victorian" lingers as an insult because we wish to distance ourselves from Victorian culture precisely because ours is so very similar.

I didn't buy it after seeing Hinton's alienating take on Alice in Wonderland, but I must admit the characters in this Victorian play are an awful lot like many Canadians I know – the obsession with who is a man or a woman "of property" sounding not dissimilar to many dinner-party conversations I've participated in on the subject of house prices. And as someone currently embroiled in the marital industrial complex, I blushed to find myself relating to the penny-pinching Chevriot as he obsessed, hilariously, over exactly how much a wedding dress costs by the yard and wedding cake by the slice.

The frequent references in Gilbert's script to Chevriot's shares in the "Royal Indestructible Bank" alone do suggest that delusions of the Victorian age are not far from ours.

I could have done without the meta-theatrical song-and-dance that opened Panych's production – Billy Bennett tunes My Mother Doesn't Know I'm on the Stage and She was Poor but She Was Honest. They set the wrong tone – and it took me the full first act to realize that the style has more in common with high Restoration comedy (or Joe Orton) than music hall.

Then again, that first act is itself a bit of a miss. Many of Gilbert's jokes are at the expense of the Scottish characters and their accents. To a Canadian ear, English accents seem no more or less ridiculous.

And I would really like to know why the Shaw Festival regularly programs three-act plays – and then makes them lopsided by having only one intermission. (The Stratford Festival never passes up on the opportunity to sell more ice cream bars.)

But now I'm reminded of Cheviot again, who arrives in the second act with a line that also made me feel uncomfortably Victorian: "Here I am at last – quite flurried and hot after the usual row with the cabman, just when I wanted to be particularly calm and self-contained. I got the best of it though." 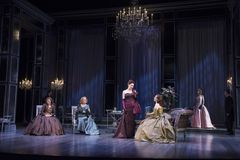 Theatre Review
Shaw Festival’s Mrs Warren’s Profession: There’s the seed of a superb production here – but it stays safe
May 17, 2016 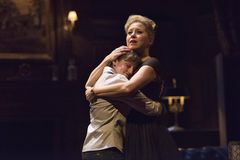 Theatre Review
Shaw Festival’s Uncle Vanya is free of mannerisms and soaked in honesty
May 16, 2016 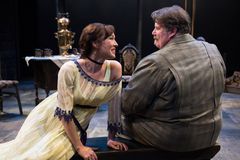