Urbanite stuck in the overheated city core? Cottage envy getting you down?

Have I got the quick-fix program to cure you of those sweaty summertime blues; it may be 39 steps, but it takes less than 2-1/2 hours to complete at Soulpepper Theatre Company.

That would be, well, The 39 Steps – a paper-thin parody of the 1935 Alfred Hitchcock thriller that is the theatrical equivalent of a beach read.

There's not much to playwright Patrick Barlow's burlesque of old-timey thrillers and their tropes, but he has provided the framework for a quartet of actors to goof around entertainingly for a couple of hours. The four in director Ravi Jain's free-wheeling production deliver enough loosey-goosey laughs in an air-conditioned environment to send you home happy and cool as a cucumber.

In its varied incarnations, The 39 Steps has always been, first and foremost, about beating the heat.

Scottish writer John Buchan published the original adventure story of that name, the first of many about an accidental Scottish action hero named Richard Hannay, as a late-summer serial in Blackwood's Magazine in 1915.

Twenty years later, Hitchcock's movie starring Robert Donat came along as summertime popcorn fare, the English director's version altering the plot of the book in many ways big and small, including turning Hannay into a Canadian.

Perhaps that was a nod to Buchan's circumstances at the time: Just months before the film was released, the novelist had been appointed as the governor-general of Canada by King George V. (The 39 Steps: A Part of Our Heritage?)

This stage version of The 39 Steps has it own unusual origin story. In 2005, British playwright Barlow took an existing stage adaptation of the thriller for four actors and had the bright idea to tweak it into an outright comedy. Success followed on the West End and Broadway and pretty much everywhere.

In this overdue Toronto professional debut, Kawa Ada plays the hero, Hannay – with a pencil mustache and plenty of parodic panache.

Raquel Duffy incarnates the various women Hannay encounters along his barely explicable adventure – first, the spy who alerts him to a plot to leak British air force secrets to foreign baddies before dying; lastly, a screwball-style romantic interest he gets handcuffed to during much of the denouement.

The real stars of the production, however, are the actors playing parts listed as Clown 1 and Clown 2. Anand Rajaram and Andrew Shaver cycle through the dozens upon dozens of characters Hannay encounters on his baffling mission through the Scottish Highlands: spies, vaudevillians, police officers and hotel concierges.

As the only performer in the production to play the same character for the entire performance, I guess you'd call Ada the straight man. But he earns his fair share of guffaws and impressed applause through expertly executed physical comedy early on, fumbling with Venetian blinds, or trying to escape from under a stabbed spy's body after she falls on top of the armchair he has been sleeping in and develops unusually quick rigor mortis.

It's Shaver who is the comic standout of this production, however. From the moment he plays a shoe-tapping music hall entertainer called Mr. Memory with just the right amount of creepy confidence, he has the audience in stitches through great character work married to an uncanny understanding of how to sell shtick.

By some miracle, Shaver even makes much of the "oo, er, missus" humour in Barlow's adaptation and Jain's production palatable, nay, hilarious. Playing a grinning brasserie salesman who won't stop brushing his body parts up against Hannay on a train or a jealous cross-eyed farmer, he won me over every time with his portrayals of perverts and prudes – I think due to a mischievous air that adds an element of anarchy to everything he does.

Rajaram, a Second City veteran who recently grabbed a Dora Award for his starring role in Kat Sandler's Mustard at the Tarragon Theatre, shows his work a little more with his many characters, but definitely brings down the house with his zany take on the Big Bad Guy employing an accent that, if it were a cellphone, would bankrupt you with its roaming charges.

Duffy provides solid support, even if she is perhaps the least natural comedian – her exaggerations missing an element of surprise needed to get my diaphragm dancing, anyway.

A final nod to stage manager Robert Harding for his excellent comic timing calling the cues – there are aspects of André du Toit's lighting design and Verne Good's sound design (including a couple of "Easter eggs" for Hitchcock fans) that tickle the funny bone all on their own. 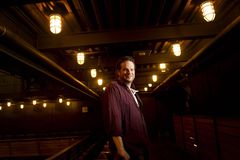 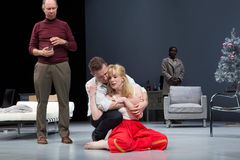 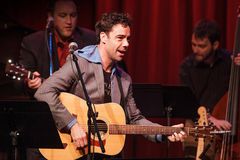