I can only summon up mild appreciation for The Lion, the Witch and the Wardrobe at the Stratford Festival.

But then, mildness seems to be the goal of this adaptation and director Tim Carroll's production.

While exploring her new home, Lucy, the youngest, steps into a fur-coat-filled wardrobe and emerges in the magical land of Narnia and is invited to tea by a faun named Mr. Tumnus (a charming Mike Nadajewski).

There, she learns that the White Witch (Yanna McIntosh) has frozen the country in a perpetual winter – and ordered the capture of any humans spotted to prevent a prophesy of her rule being ended by the return of two "sons of Adam" and two "daughters of Eve."

Naturally, Lucy, her siblings and a giant Christ-like lion named Aslan can't resist interfering in the internal politics of this talking-animal land, leading to triumphant regime change followed by long-lasting peace. Yes, it's a children's story.

Much of the Stratford production's design emphasizes that this story originated as a book. Douglas Paraschuk's set is made up in part by stacked tomes, Brad Peterson's projections spin phrases and sentences along a cyclorama, and Dana Osborne's costumes are lined with words, too.

When Aslan does appear here, his mane is made out of covers of children's books – including the one whose adaptation we are currently watching.

Carroll directs in a detached style not far off from his work in original-practices Shakespeare – there's always a strong sense of play to the proceedings.

The downside of his gentle approach is that we're never fully immersed in the danger of the story and nothing is particularly thrilling; the show seems geared toward younger children (though it runs two hours and 15 minutes with an intermission).

With only my adult eyes and ears to rely on during a week in Stratford, however, I found most of the appeal of this production by the incoming artistic director of the Shaw Festival going under my head. The show aims low and hits its target.

Though there were a few jokes catering to grown-ups, it's not exactly a panto. Steve Ross's very funny performance as a nervous Beaver who seems to have arrived in Narnia via Newfoundland was the only one I found truly engaged and therefore truly engaging. (Alas, his partner, Mrs. Beaver, played by Barbara Fulton, is outfitted with an overly large set of rodent dentures that rendered most of her lines unintelligible.)

As Lucy, Farb captures the frustrations of being a disbelieved child quite beautifully, while Morin is enjoyably mischievous as Edmund.

(I've been impressed by the Stratford Festival's inclusive casting so far this season – so it's a little surprising that in the show geared at children, all four young protagonists should be played by white actors.)

The adaptation Stratford is using is a 1998 one by Adrian Mitchell – the English poet best known in these parts for his decidedly not-for-children verse translation of Marat/Sade. It was originally commissioned as a Christmas-time show for the Royal Shakespeare Company – and I could see it sitting more happily as a holiday show. (After all, Father Christmas does make an appearance – here in the wry form of Michael Spencer-Davis.)

It's not a musical, but there are a number Celtic-influenced, penny-whistle-heavy songs by the Irish composer Shaun Davey. Prerecorded and piped in with pointless lyrics, they grind the show to a halt.

You can't help but feel that the British theatre world has really upped its large-scale family theatre game since the 1990s – the RSC's recent adaptation of Matilda, a proper musical, is light years ahead of this.

Indeed, the puppetry work here by Alexis Milligan feels a tad dated, too – and can't help but come across as a bit of a poor man's War Horse amid all the British accents.

The Schulich Children's Plays series has been one of its most inconsistent areas of programming at the Stratford Festival – and it's clear they're really struggling for top-notch material for families that can fill a major stage. Or material specifically geared toward Canada or North America.

The Lion, the Witch and the Wardrobe continues at Stratford's Avon Theatre to Oct. 22 (stratfordfestival.ca). 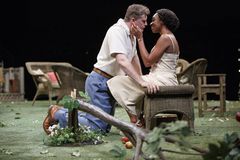 In praise of theatre, even if seats remain empty
June 3, 2016 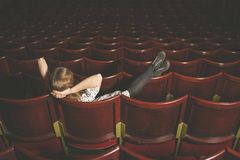 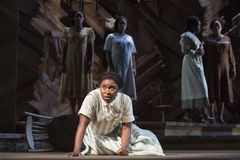