Watching the first part of Stupidhead!, the lovable, sincere and silly musical comedy about dyslexia, one is suspicious that its writer-performer is even dyslexic. For one thing, she can spell d-y-s-l-e-x-i-a, something that even Einstein could easily not do. She has trouble with math, organizational skills and directions home – same here – so maybe she's not so much dyslexic as she is harebrained.

Turns out, Katherine Cullen suffers from dyscalculia, a numbers-based dyslexia that is a legitimate (if niche) learning disability and, as one can imagine, an utterly frustrating condition. Which is what Cullen's two-hander Stupidhead! is all about: Frustration – frustration with one's brain, and the audacious overcoming of shame and limitations.

Cullen, a performer with high pigtails and even higher gumption, makes no bones about her shortcomings. She tells her audience that she "doesn't know what pitch is," and that she's no Julie Andrews. With little theatrical training or much in the way of musical ability, Cullen, nevertheless, says making a musical was a childhood dream, one that was now being realized, for better or worse, in front of our eyes.

With composer-pianist Britta Johnson by her side on stage, Cullen unfolds her life lived with a learning disability. Droll, catchy-enough songs are at turns bouncy and emotional, with a strong dash of I-gotta-be-me twee that won't be to everyone's taste. Sophisticated this isn't – let's call it a monologue with melody.

Besides her battle with her brain – which hangs centre stage, glowing – Cullen's aggravations include the memory of a grade-school injustice. With her teacher's encouragement, the pipsqueak entered a poetry contest. One of her competitors was a little Peter Dyakowski, now a Toronto Argonaut football player who was judged by the CBC in 2012 to be Canada's Smartest Person.

Cullen's poem – "a metaphor for mortality" – lost out to Dyakowski's. "Poignancy was a casualty," she explains, with a sigh.

In Stupidhead!, however, poignancy is a virtue. We hear a crushing story about a teacher, at her wit's end with young Cullen's mathematic ineptitude, tearing pages out of the girl's textbook. Cullen found out later that the teacher, so worried about her anger issues over her student, sought counselling.

Cullen takes out her own frustrations on Jennifer Aniston, a dyslexic (like Einstein), but otherwise, in Cullen's mind, perfect. At issue is Aniston's vouching for Smartwater, a peddling of "empty success at $4 a bottle."

While Aniston had an ideal haircut and was married to Brad Pitt, Cullen had to take her brother with her to the convenience store because she didn't know how to get there and, once there, couldn't figure out how much the candy cost." My childhood was an unintentional acid trip," she says.

Things didn't get much better as she grew up: At age 22, for a full year she used fabric softener instead of detergent, which resulted in clothes that were falling apart instead of being cleaned. (Wait, what does that have to do with dyscalculia?)

Though witty and touching, Cullen loses me a bit with the premise that her play is in itself a triumph over her limitations. Should a tone-challenged singer be applauded for getting on stage to sing? She describes Stupidhead! as "meta," but the construct is convenient and unconvincing. And not required – the story stands on its own, the less meta the betta.

Cullen saves the best for last, with a heartbreaking segment about a relative and a cute rebound involving a childhood story retrieved from her brain. She sings about a persistent worry: "What if I never get home?" But, with Stupidhead!, a quirky look at alienation and brain-based confusion, she makes it there.

Theatre Review
Cage: A strange exercise in retro experimentation
May 17, 2018 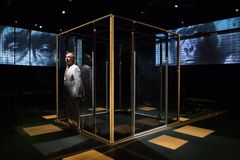 Review
The Orange Dot: A battle of the sexes that’s not worth fighting
April 14, 2017
Review
Punk musical Hard Core Logo: Live is more live than hardcore
April 14, 2017
Follow Brad Wheeler on Twitter @BWheelerglobe
Report an error Editorial code of conduct
Due to technical reasons, we have temporarily removed commenting from our articles. We hope to have this fixed soon. Thank you for your patience. If you are looking to give feedback on our new site, please send it along to feedback@globeandmail.com. If you want to write a letter to the editor, please forward to letters@globeandmail.com.
Comments