No one wants to buy a ticket to a show that anyone can get a ticket for.

That's usually the credo of the commercial theatre, but it's one that Mitchell Cushman has shrewdly applied to his work in Toronto theatre's fringes over the past couple of years.

With his company, Outside the March, Cushman has staged local premieres of contemporary plays in small, pop-up spaces with very limited audience capacity – in a kindergarten classroom, for instance, or a "hacker collective" in Toronto's Kensington Market.

This buzz-building strategy – married to solidly acted and inventively directed productions – has helped the twentysomething director quickly make the leap to the most prestigious stage in town: the Royal Alexandra.

Well, sort of. Terminus, a darker-than-dark 2007 Irish play written in vividly vulgar verse, was first produced by Cushman at the SummerWorks Festival in August with both audience and artists sharing the stage of the Factory Theatre.

Now, Mirvish Productions, to kick off its new, edgier "Off-Mirvish" subscription series, has transported the show to the Royal Alex, keeping the audience arrangement intact: spectators sit on 200 on-stage chairs, looking out at the 1,500 seats where they normally would be seated.

Mark O'Rowe's play, comprising three interwoven profanity-filled monologues by nameless characters, is performed in front of this backdrop on a thin gangplank that leads dangerously to the lip of the stage; it's flanked by two shimmering black wings made of what look like strips of hockey tape.

Maev Beaty, in a sharp, bitter performance, is the first to step out on this balance beam, as an ex-teacher who volunteers at a suicide hotline. After a call from a former student in need, she turns film-noir private detective to track her down – and ends up glimpsing a gritty Dublin underworld where lesbian gangs perform illegal abortions in the back rooms of bars with sharpened broomsticks (a twisted twist that was much less topical this summer).

Ava Jane Markus, her natural glow on a dimmer switch, comes up next as a sweet but depressed girl who accepts what seems like an innocent invitation out for a pint. It leads to a dangerous situation at the top of a crane – and a near-death encounter with an otherworldly creature.

Lastly, Adam Kenneth Wilson sneaks onto the sliver of stage in a quiet, quicksilver performance that makes you lean in to listen. He plays an oddball barfly who quickly seduces us with his wry wit, but then reveals himself as a monster who has, literally, sold his soul to the devil.

Terminus's flight into the fantastic never comes across as anything less than believable thanks to the transfixing production. Indeed, it had me covering my eyes at moments, even though its images of extreme violence are only conjured to the beat of Rowe's brutal but beautiful language.

Cushman and production designer Nick Blais have figured out how to capitalize on the sheer size of the Royal Alex with evocative lighting. The play's claustrophobic passages gripped before, but now it's O'Rowe larger, cinematic images that resonate best – such as a battle between angels and demons in a cavern.

The coup comes when Markus's character's life flashes before her eyes and all the cruelty and tenderness of being alive spins out of her mouth in a rap for the end of the world. The house lights slowly come up on the red seats of the Royal Alex, now a graveyard of unmarked tombstones, the terminus where we're all headed. What a transcendent transfer to kick off Off Mirvish. 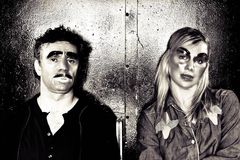