The Dybbuk, Or Between Two Worlds

At Young Centre for the Performing Arts

At Buddies in Bad Times Theatre

Soulpepper boss Albert Schultz, anticipating glib theatre critics, has described his new show in the company's promotional video as "Romeo and Juliet meets The Exorcist, on the set of Fiddler on the Roof." Which pretty much sums it up. But if that description isn't enough to entice you, then you should know director Schultz and his designers have staged it with the same imagination and brio as last season's hit, Of Human Bondage, the remount of which is also running at Soulpepper now.

Not that The Dybbuk has the same complexities as W. Somerset Maugham's work. Although steeped in Jewish mysticism and folklore, at heart it's just a rattling good ghost story.

In the Russian shtetl of Brinnitz, poor yeshiva student Channon (a febrile Colin Palangio), mad with love for the rich man's daughter Leah (an ethereal Hailey Gillis), begins dabbling in the forbidden Kabbalah in hopes of casting a spell to win her. When Channon dies, his malicious soul – in Yiddish, a dybbuk – inhabits her body. It's up to the great Rabbi Azriel (William Webster), with help from a mysterious Messenger (Diego Matamoros), to find a way of exorcizing him.

Adapting the Russian-Jewish writer S. Ansky's century-old play, Piatigorsky (Eternal Hydra) revels in its Judaic esoterica and the actors embrace it with conviction. It's almost worth the price of admission just to hear Webster's mighty rabbi utter words like "maledictions and anathemas."Schultz and set designer Lorenzo Savoini do some spell-casting, artfully conjuring up the sombre world of the shtetl with a few sticks of furniture, some dark scrims and a ton of black clothing (Shannon Lea Doyle designed the costumes). Bonnie Beecher contributes bold Expressionist lighting, Mike Ross and Richard Feren supply a melancholy, klezmer-inflected score, and the superb cast of 22 do the rest. (There really are enough people onstage to perform Fiddler if they were so inclined.)

What most impresses, though, is the way the show gets its Exorcist-style effects with not much more than a little amplification, shadow tricks and cunning sleight-of-hand. This may just be a ghost story, but it's a classy one.

It was at Soulpepper that many of us first met Mr. Kim, the lovable Korean-Canadian father in Ins Choi's hit comedy Kim's Convenience. Now there's another, very different Korean immigrant dad to be found at Buddies in Bad Times, where Toronto's fuGEN and Theatre Smash companies are co-producing the Canadian premiere of Julia Cho's Durango.

Cho's low-key generational drama introduces us to Boo-Seng Lee, a middle-aged, widowed parent as reticent as Mr. Kim was expressive. When Mr. Lee (Hiro Kanagawa) is laid off from his job after 20 years, he declines to tell his two sons, 21-year-old Isaac (David Yee) and teenage Jimmy (Philip Nozuka), but instead takes them on a spontaneous road trip from their Arizona home to Durango, Colo.

The supposed reason for the trip is to ride Durango's historic mountain railway. Jimmy is eager to go. Isaac, who has bad memories of past family vacations that his brother is too young to recall, is more wary, but reluctantly comes along. As it turns out, both boys, like their dad, are harbouring secrets – including homosexual feelings – that are gradually revealed during the long and, thanks to Mr. Lee's poor navigational skills, erratic drive.

Cho is an award-winning Asian-American playwright and TV writer (Big Love, Fringe) and with this 2006 play she pumps fresh cultural fuel into the tired road-trip genre. Most notably, she paints a heartbreaking picture of an aging first-generation immigrant who has never really found his place in life or in his adopted country. When Mr. Lee, beautifully played by Kanagawa, recalls being mocked for his Asian accent, not just by his co-workers but by one of his sons, you can feel the lingering sting of his humiliation.

Director Ashlie Corcoran's staging is at times overly busy but she gets pitch-perfect performances from her cast. As Isaac, a moody, guitar-strumming Yee incarnates the cynical slacker, while Nozuka is an endearing little spark plug as Jimmy, the golden-boy athlete and budding comic-book artist. Their scenes with Kanagawa show us just how much distance there can be between a father and sons, even when confined to a car.

Like The Dybbuk, there are also fantastical elements in Durango. They include a clunky subplot involving the Red Angel (Adrian Shepherd), a superhero created by Jimmy, but also some vivid moments when the men remember, and embody, Mr. Lee's late wife – the eloquent female spectre that hovers over this play about inarticulate males.

The Dybbuk runs to June 18 (soulpepper.ca); Durango runs to May 31 (buddiesinbadtimes.com). 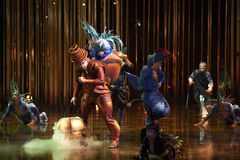 Theatre Review
The Lady from the Sea: True to Henrik Ibsen but not exactly radical
May 21, 2015 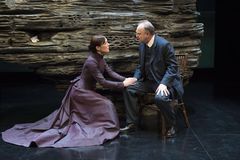