Two years into the centenary of the First World War, we are now approaching the Somme.

Few battles evoke the madness of the attempted suicide of Western civilization we took part in a century ago more than the Somme, where waves of Allied troops marched right into German fire for 4 1/2 months.

It began on July 1 with the 1st Newfoundland Regiment being decimated, an accurate verb for once, at Beaumont-Hamel; out of the 790 men who went over the top, 324 were killed and 386 others were wounded. By the time the offensive ended in November, the Allies had taken more than half a million casualties – about 24,000 of which were Canadian.

How do you even begin to remember a slaughter like that, so pointless that it might be funny if it weren't so horrific? Well, for once, the VideoCabaret style of dramatizing history seems not off-kilter, but fitting. The Toronto theatre company's bleak buffoonery captures it almost too well in The Great War, with a sense of humour as black as frostbitten feet.

VideoCabaret's The History of the Village of the Small Huts probably needs no introduction for Canadian theatregoers. Playwright and director Michael Hollingsworth has been cycling and recycling through these epic plays since 1985. Once fringe, his company is now establishment – having been invited to the Stratford Festival in 2012, and taken up residency alongside the Soulpepper Theatre Company at the Young Centre for the Performing Arts three years ago.

Wearing towering wigs by Alice Norton and satirical costumes by Astrid Janson and Melanie McNeill, a cast of seven quick-change their way from farm-boys-turned-privates up to Prime Minister Robert Borden, showing 1914 to 1918 from a Canadian panorama. The action all takes place on a smallish stage behind a picture frame, people and cartoonish props lit by pinpoint lighting, with weird synth music by Brent Snyder giving the whole thing a 1980s B-movie feel.

Hollingsworth's scenes are short, loose sketches, separated by blackouts, that usually impart a point or two of historical information, give you a punchline of sorts and an emotion, usually sour, and then move on quickly.

You either love the style, or you like it. I've yet to meet anyone who really hates VideoCabaret – and they never really botch it. The point is to tell history in a punchy fashion to an amnesiac nation, and, with The Great War, as usual, they succeed.

Borden (David Jansen) is the first to appear in the play, playing golf with his wife when Solicitor-General Arthur Meighen (VideoCab regular Rick Campbell) comes in to tell him about a certain archduke being assassinated.

Borden is baffled by the significance, and maintains a general sense of bewilderment onward. Frustrated with being kept out of the loop by the British generals and politicians, he often gets news of casualties from The Globe, not yet merged with The Mail and Empire. Like all the English-speaking Canadians in the play, he's on the journey from colonial to Canadian.

Hollingsworth doesn't care too much about the why of the war. He dramatizes it mainly as a meaningless apocalypse that springs out of a family squabble – King George V, Tsar Nicholas II of Russia and Wilhelm II, the German Kaiser and King of Prussia, all being grandchildren of Queen Victoria.

Illustrating this from the Canadian end is Prince Arthur, the Duke of Connaught, our 10th Governor-General (Mac Fyfe, putting the imp in imperious). The head of state's mother was Queen Victoria – and he is married to a Prussian princess. It was their daughter, Princess Patricia, who lent her name to one of the infantry regiments.

Full credit to Hollingsworth: I hadn't quite before considered the dark irony that the first Canadian troops to arrive in Europe to fight the war were doing so under the name of the daughter of a Prussian princess, another grandchild of Victoria.

Otherwise, The Great War is kind of a bullet-point history, mainly of the military battles, from the perspective of five Canadians – Colonel Arthur Currie (Campbell again), two lieutenants and two privates. They take us through the insanity of Ypres and the Somme to the victory at Vimy Ridge and beyond.

If you know this history already, Hollingsworth's take is pretty standard. And as a piece of drama, it's facing off against a whole library shelf of Canadian plays – from John Gray's musical Billy Bishop Goes to War, Stephen Massicotte's Mary's Wedding to Vern Thiessen's Vimy.

English Canadians can't get enough of this birth-of-a-nation moment onstage. As Hollingsworth's play briefly illustrates through the appearance of Henri Bourassa (Jacob James, in a heinous, hilarious accent), French Canadians didn't need the war to feel like Canadiens.

A child of Welsh and Irish immigrants to Canada, Hollingsworth started writing his cycle of plays in 1982, the program notes say, after he realized that "like most Canadians of the TV generation, [he] knew more about the Alamo than the Algonquin." Perhaps it's a sign of success on a mission accomplished that The Great War, for all its entertaining, upsetting and streamlined storytelling, seems less than necessary now in our Internet era. 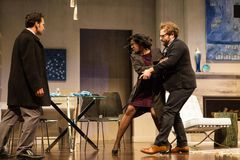 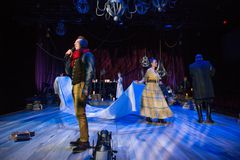 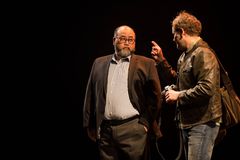