The Italian vacation is all the rage at the Shaw Festival this summer. Over at the Festival Theatre, 1920s English ladies are sharing a seaside castle in northern Italy for one Enchanted April. And here at the Court House, a 1950s American mother and daughter, visiting Florence, are finding their hearts illuminated by The Light in the Piazza.

Adam Guettel and Craig Lucas's 2005 Tony Award-winning musical, based on the 1960 Elizabeth Spencer novella-turned-film, is a tender tale that ruminates on love through contrasting songs of innocence and experience. And Guettel cannily crafts those songs in a style that combines the lush, romantic strains of Italian opera with wry, rational lyrics reminiscent of Stephen Sondheim.

It's a style that, while adored in some quarters, isn't everybody's cup of caffé latte. Unlike the great musicals of Guettel's grandfather, Richard Rodgers, this show is more likely to leave you quoting the lyrics than humming the score. But Jay Turvey's sensitive Shaw production boasts two radiant performances that may just seduce you anyway.

Margaret Johnson (Patty Jamieson) and her 26-year-old daughter Clara (Jacqueline Thair) have travelled from Winston-Salem, N.C., to take a culture bath in the ancient city of Leonardo and Michelangelo. But when a hunky young Florentine named Fabrizio Naccarelli (Jeff Irving) rescues Clara's sunhat from an errant wind, their eyes meet and it's instant Romeo and Juliet.

Only, unlike Romeo's Montague folks, the Naccarelli clan members are warmly welcoming from the moment they learn that their youngest boy is in love. After a few short meetings with Clara and her mother, the family is already talking marriage and villas in the Tuscan hills. Margaret, however, is hesitant. Clara may seem to be just a sweet, bubbly girl, but in fact she's mentally impaired – the victim of a brain injury sustained on her 12th birthday.

The handicap has gone undetected by the Naccarellis because of the language barrier, but Margaret knows that sooner or later Clara's arrested emotional development will give her away. Without any help from her husband, Roy (Shawn Wright), who remains preoccupied in North Carolina, Margaret faces the tricky task of disappointing the Naccarellis and breaking her daughter's heart.

Guettel and playwright Lucas (Prelude to a Kiss), who wrote the musical's book, use this simple plot as an occasion to meditate on new love and the difficulties of sustaining its fire as time goes by. While Clara and Fabrizio are all giddy and goo-goo-eyed, launching into arias of infatuation, Margaret is left to wonder how she and Roy – who once honeymooned in Florence – have grown apart. "I can see the winter in your eyes, love," she sings to him (there's one of those quotable lyrics) in Dividing Day, a rueful ballad of marriage gone cold.

The Broadway version of Piazza felt like Margaret's musical, thanks to Victoria Clark's warm-blooded, Tony-winning performance. Jamieson, who previously played the role for Acting Up Stage Company's 2010 Toronto production, doesn't connect with an audience in the same way. As a result, her Margaret, while not unsympathetic, comes off like a secondary character.

Instead, it's the young lovers who enchant us from the get-go. As Clara, a baby-faced, shiny-eyed Thair is the very embodiment of Eisenhower-era innocence. A sheltered American ingenue in Italy – "the land of naked marble boys," she sings with virginal awe – her childlike enthusiasm is inextricably mixed with the excitement of any young person on her first trip abroad.

As her Romeo, Irving is just as joyously uncomplicated. His big, floppy-haired Fabrizio is like an overgrown puppy, a Latin Justin Bieber. His first number – Il Mondo Era Vuoto, sung, as are several of the Naccarelli songs, in Italian – is a hilarious flight of over-the-top ardour. Later, he throws just as much headlong passion into a song of despair.

Among the other Italians, dapper Juan Chioran, who was also in the Acting Up Stage Company production, oozes old-world charm as Fabrizio's haberdasher papa. And Kaylee Harwood brings a dash of bitter comedy to Franca, the wife of Fabrizio's philandering older brother, when she forewarns Clara of infidelity in The Joy You Feel.

Guettel's glistening score is played by a five-piece piano-and-strings ensemble, led by musical director Paul Sportelli. Their music fills the intimate Court House space beautifully, but their physical presence makes Turvey's direction on its limited stage all the more cramped.

Designer Michael Gianfrancesco sketches in Florence with a few archways and a rather distracting marble tomb, which may be overdoing the Romeo and Juliet analogy. The light in this Piazza, however, makes all the difference. Andrew Smith washes the set in a buttery yellow hue that evokes old marble and warm Italian sunshine.

The Light in the Piazza runs to Oct. 13. 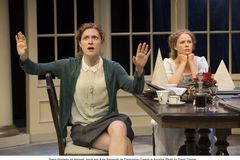 Theatre Review
When it comes to Faith Healer, colour me skeptical
July 16, 2013 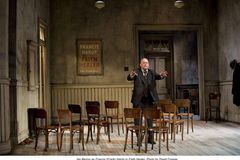 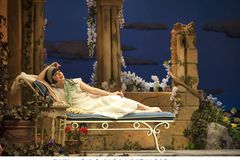 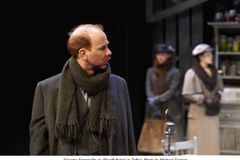