There's a new Shakespeare play premiering on the Stratford Festival's mainstage. It's called The Tragedy of Shylock.

Or rather, it's that old anti-Semitic comedy, The Merchant of Venice, skillfully reshaped by Stratford artistic director Antoni Cimolino and actor Scott Wentworth into a melancholy meditation on prejudice and ignorance.

Even if you don't agree that Merchant is anti-Semitic, you still have to concede that it's a comedy about anti-Semites in which the Christians rule the day.

Wentworth and Cimolino, however, prove just how far performance and staging can go to realign it for a modern audience.

To begin with, Wentworth as the cruel money-lender Shylock suggests, in appearance, one of Canada's best-loved Jews.

With his sombre suit and close-cropped silver hair, he looks like Leonard Cohen in a yarmulke. And he has a sense of humour, too.

When he first demands as a forfeit from the merchant Antonio (Tom McCamus) that infamous "pound of flesh," he suddenly slips into a cackling parody of the Evil Jew – a send-up of the very stereotype Shakespeare was exploiting. And he sets the outrageous condition in a manner that suggests he might be joking.

Only later, after his beloved daughter Jessica (Sara Farb) has run off with a Gentile, does the forfeit suddenly become his means of revenge against Antonio and his other Christian tormentors.

Cimolino constantly reminds us of that torment. He has updated the setting to 1930s Venice, where Fascist Blackshirts roam the streets alongside Catholic priests, and Shylock can't go anywhere without being taunted by small boys or pelted with stones.

He is no longer the villain of the play, but a tragic figure whose flaw, his tenacious pursuit of revenge, is completely understandable.

As other productions have shown us, such an interpretation has a price in tainting the play's comedy. Its fun-loving young Venetians, whom audiences were meant to identify with, are now unpleasant racist louts.

Only Tyrell Crews's callow Bassanio remains likable – he's so in love with Portia (Michelle Giroux) that he doesn't have time for racism.

Portia herself, one of Shakespeare's best heroines, also loses some of her charm, being the character who, in the guise of a cunning male judge, has to bring about Shylock's downfall. That said, Giroux is superb in the role.

Lounging about her estate in Belmont, she's like the glamorous, witty patrician in a Philip Barry play. And when playing the doctor of laws, her angular features and smoky voice make her a credible young man.

Her early scenes in Belmont, entertaining various aristocratic suitors, provide the only purely comic moments. Antoine Yared, sporting a shamelessly silly Spanish accent, provokes a barrage of belly laughs as the Prince of Arragon. A goofy, falsetto-voiced Ron Pederson, on the other hand, is persistently unfunny as the play's main clown, the servant Launcelot Gobbo.

As Antonio, whose loan from Shylock furnishes Bassanio with the means to woo his lady, the handsome McCamus resembles a jaded Fellini hero.

He also seems to have a martyr complex. When it comes time to submit to the money-lender's knife, he willingly presents his bare chest and loudly recites the Hail Mary. Even then, however, he can't pull focus from Wentworth.

Brian Bedford was originally to have starred as Shylock in this production, but had to bow out in late June due to illness. Wentworth, who was already playing another classic Jewish character, Tevye the dairyman, in the musical Fiddler on the Roof, must have seemed like the natural replacement. Seeing him in both parts is a study in contrasts. As Tevye, he joyously embodies a beloved folkloric figure. As Shylock, he tries to painstakingly erase every trace of a despised stereotype. He does about as much as you possibly can without actually rewriting Shakespeare.

This is a much better conceived Merchant than Stratford's last revival, in 2007, which starred Graham Greene as Shylock and Wentworth as Antonio.

Late in the show, his music, heard on a radio, is repeatedly interrupted by the speeches of Mussolini and Hitler. By then, however, we've got the picture. Shylock's personal tragedy as a European Jew is just a foretaste of a far broader and more horrifying one to come. 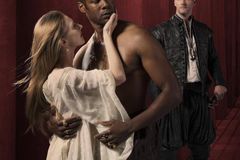 Theatre Review
The Thrill: Performances save a play that is wanting in perspective
August 14, 2013 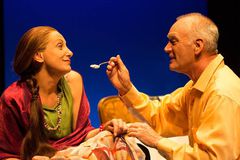 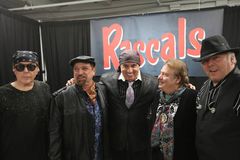