Despite four decades of critical recognition – including excellent reviews from The New Yorker and The New York Times – I can't say I was expecting Les Ballets Trockadero de Monte Carlo to be my kind of humour. An all-male ballet troupe who perform the classics in drag and call themselves by multisyllabic Russian puns (e.g., Innokenti Smoktumuchsky and Nadia Doumiafeyva) sounds camp enough to send me into loops of adolescent eye-rolling. But not only was I charmed and entertained by the 17-member troupe's ridiculous antics, I was also impressed by the cleverness of the comedy and the calibre of the dancing. The New York-based Trocks, who performed at Toronto's Winter Garden Theatre on the weekend and will continue their three-city Canadian tour later in the week, are a fantastic example of satire that works.

Something that often rankles me with comedic ballet is when the humour feels tacked onto the dancing as a kind of supplement, rather than engendered by the movement itself. Not so with the Trocks. This is true physical comedy and accomplished classical technique rolled into one. The choreography is uncannily good at homing in on ballet's underlying absurdities and parodying the form's admittedly weird conventions. It's slapstick and theatrical for those who don't know ballet, complete with inflated tropes of good and evil, feminine chastity and masculine libido, diva-sized egos and virtuosic displays of athleticism. But the satire is so spot-on in a technical sense that I think it's even funnier to those of us who know the form inside-out and can really delight in having the familiar exposed for all its bizarreness.

Key examples of the broad-strokes humour came in the first piece on the program, a reimagining of Act 2 of Swan Lake. Performed in front of a Ballets Russes-style backdrop of a painted castle, Prince Siegfried (Boris Mudko) and the Swan Queen (Nadia Doumiafeyva) are both platinum blondes wearing such extreme makeup that their faces look warped by Botox. The evil sorcerer (Jacques d'Aniels) performs a typical ballet convention of running purposefully in a circle as though he's going somewhere. In this version, he gets disoriented and keeps running. Then – and this is among my favourite ballet customs to poke fun at – the dancers enact a signing pantomime that is so elaborate and inscrutable it looks like baseball pitcher-to-catcher code. At one point, one of the dancers has to concede that he has no idea what the other is trying to tell him.

The more subtle humour comes straight from the dancing itself. Petit battements are a step that require one foot to move very quickly from front to back on the opposite ankle. When well executed, the momentum makes the foot look as though it's been possessed by demonic speed. Verbosovich's battements are so clean and exaggeratedly quick that they are simultaneously technically formidable and self-consciously hilarious – her entire body appears awed by what's happened to her foot.

The program also includes the pas de deux from Le Corsaire, in which Araf Legupski performs a show-off sequence of jaw-dropping leaps and flips, then guffaws modestly toward the audience. In the pas de six from Marius Petipa's La Esmeralda, Nina Immobilashvili makes great satire out of the perpetually lachrymose heroine.

While the audience loved Maria Paranova's take on Michel Fokine's The Dying Swan, set to music by Saint-Saëns, I thought this was the evening's weakest link. The Swan loses her feathers and is forced into ungainly positions as she dies on stage; it's lighthearted mockery instead of incisive parody.

But on the whole, the Trocks' three-act program is both paean and roast to a gorgeous form and its deeply entrenched conventions. The jokes land across a comedic spectrum, but they're delivered with unwavering love.

Les Ballets Trockadero de Monte Carlo will perform at the National Arts Centre in Ottawa on Feb. 17 and at Place des Arts in Montreal Feb. 18-19 (trockadero.org).

Hope soars: ballet auditions that could change their lives
February 12, 2017 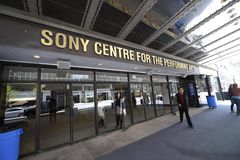 Review
Dancer: A so-so documentary about the ‘bad boy’ of ballet
February 10, 2017
Follow us on Twitter @globeandmail Opens in a new window
Report an error Editorial code of conduct
Due to technical reasons, we have temporarily removed commenting from our articles. We hope to have this fixed soon. Thank you for your patience. If you are looking to give feedback on our new site, please send it along to feedback@globeandmail.com. If you want to write a letter to the editor, please forward to letters@globeandmail.com.
Comments