Theatre is usually so unsexy when it tries to be sexy.

And yet, Venus in Fur, that unlikely S&M-themed Broadway play, has a moment that actually arouses – at least in Canadian Stage's new production. It involves a female foot slowly penetrating a shiny leather boot, a soft sigh, then the zipping of a zipper all the way to the tippy-top of an upper thigh. The opening-night audience held its collective breath, then all exhaled at once. That counts as a minor theatrical triumph in itself.

Venus in Fur is dominating the theatre season across North America this year. Nominated for a Tony in 2012, David Ives's two-hander is getting at least 25 productions at regional theatres across the United States and Canada this season.

Canadian Stage's production is first to be unleashed in the true north strong and free. With the Arts Club in Vancouver producing the play next, then the Manitoba Theatre Centre, there should be a version within 3,000 kilometreSs of wherever you are in Canada some time this fall.

Rick Miller, taking a rare and refreshing break from touring his one-man shows such as MacHomer, plays a playwright and director named Thomas, who is conducting auditions for a new work based on the 1870 novella Venus in Furs. That book, about a man named Severin who persuades his free-spirited lover Wanda to let him be her slave, was written by Leopold von Sacher-Masoch, whose last name gives us the term masochism.

When we meet Thomas, in New York in the time of 50 Shades of Grey McMasochism he is on the phone with his fiancée complaining in a mildly misogynistic way about how hard it has been to find a suitable woman to play Wanda.

Enter Vanda, played with well-capped verve by Carly Street. She's a struggling actress with a New Jersey accent who arrives late, swearing a blue streak, wearing leather and too little of it. She seems to be everything Thomas was just kvetching about: classless, undereducated and overly eager to please.

Naturally, we're immediately on Vanda's side and, equally naturally, she turns out to be considerably more than she initially seems. As she begins to read the part of Wanda at a perfect transatlantic pitch with Thomas roped in to play Severin, the power dynamics of the audition room slowly shift.

Miller, known for his comic chops and vocal gymnastics, is cast against type here as the straight man – and he often seems a little straight-jacketed. It's a tough character for anyone though, a smug woman-hater who is a bit of a straw man – and, once he stops overdoing his New York accent, he fills it out with finesse. Also, when he finally submits to Vanda or Wanda or whoever she may be, slowly sealing her up in the aforementioned boots, the chemistry between the two actors is there in spades.

Jennifer Tarver directs a more balanced and nuanced production than the one that was in New York, which is no easy task since Venus is Fur's sympathies are almost as heavily weighted in the woman's favour as David Mamet's mirror-image two-hander Oleanna are in the man's.

Ives is best known for his shorts, much beloved by undergraduates – clever-clever one-act spoofs that name-drop Trotsky or Philip Glass or whatnot in an attempt what to make what are essentially sketches seem more serious. He's always been better at style than substance and appealing to audiences about the waist – but, here, he's engaged in an act of self-flagellation. Vanda attacks Thomas for being stuck in his head – and for discussing the New York Review of Books with his fiancée in the evenings rather than spanking her with a rolled-up copy of it.

Venus is Fur is, ultimately, only deceptively complex; the revenge fantasy turns out to be about what it is about – the skewed gender dynamics in the entertainment industry. For all the layers of Vanda and Wanda and the talk of domination and submission, it's only masquerading as a metaphor. Nevertheless, all the roles-within-roles make it deliciously theatrical, and Street's is in particular a performance to savour. 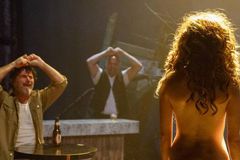 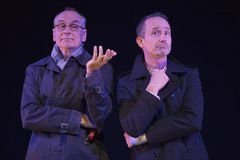 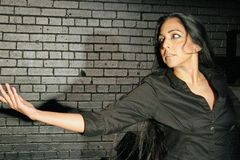 Theatre Review
PIG: An unflinching take on a tough subject
September 23, 2013
Theatre Review
The Merchant of Venice’s Shylock is realigned for a modern audience
August 16, 2013 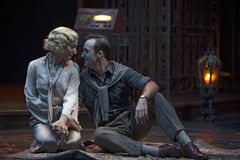