What Makes a Man is Charles Aznavour as you've never heard or seen him before.

Those uncertain the French-Armenian chansonnier needed reinvention, however, will be left unconvinced by this poorly focused show that makes you yearn for the original's vibrato and bravado.

Director Jennifer Tarver and musical director Justin Ellington have fashioned a revue out of a couple dozen of songs from Aznavour's melancholic catalogue – from well-known world hits like La Bohème and Take Me Along (Emmenez-Moi), to lesser known tunes like The Times We've Known (Les Bon Moments) and Take the Chorus (Prends le Chorus).

We're firmly in Jacques Brel is Alive and Well and Living in Paris territory here. As with that long-running off-Broadway revue, two men and two women sing songs in English translation – and act them as fiercely as they croon them. (Andrew Shaver has provided new translations for several songs – but they are mostly ones the multilingual, international singer has used himself.)

Aznavour's gravelly tenor is iconic, and the way he spins out long lyrical lines like he's auctioneering battered hearts and broken dreams is inimitable. No one tries to copycat here, thankfully.

After the six-member band plays an overture, Kenny Brawner, a jazz-funk bandleader, is the first interpreter to take the stage (a set of steps in black and blue designed by Teresa Przybylski).

Brawner, known for his Ray Charles tribute act in New York, sits down behind his keyboard and breaks into an enjoyably bluesy rendition of Yesterday When I was Young (Hier Encore) – sometimes speaking the lyrics, sometimes singing them: "The thousand dreams I dreamed, the splendid things I planned, I always built, alas, on weak and shifting sand."

From the sands of time behind him, three other singers emerge. Andrew Penner plays an eager young country-inflected busker, his hat on the ground, his suitcase his drum.

And then there's Louise Pitre, the Tony nominee dressed here in an androgynous outfit, all vehemence and barely suppressed anger, throwing in the occasional line in the original French.

Are these four performers, moodily moving about, meant to represent different parts of the same personality? Are we looking at four separate lives? Or are we simply watching four performers in the theatre, here and now?

In her program note, Tarver – Necessary Angel's new artistic director and better known for her meticulous work on plays by Samuel Beckett and Harold Pinter – suggests that even she is not quite sure what she has created. Originally, she wanted to paint a picture of Aznavour's divided self – poet, lover, performer and survivor. But now she writes, "the lens of the performer has become the central focal point for the story."

When your lens is also your focal point, it's going to be hard to see what's right in front of you. And What Makes a Man is ultimately not much more than a cabaret/concert – and taken on that unpretentious level it has its charms.

There are stories within the songs to latch onto. The title of the show comes from a sensitive one written by Aznavour about a gay man in a time when that would have been risqué; What Makes a Man is sung here by Penner and anchors a night otherwise ever-shifting in its sexual point of view. "So many times we have to pay for having fun and being gay," he sings, sensitively. But, though the song was progressive in its time, Aznavour's lyrics about a man with a passion for sewing who lives with his mother and cats now seem out of tune with the times, and with no attempts to contextualize them by Tarver, Penner's rendition – like much of the evening – seems painfully earnest.

Aznavour's performances were full of theatrical flourishes and winks when he was young – on YouTube, you'll still find the youthful singer performing a pirouette all the way off stage at the Olympia music hall in Paris at the end of Emmenez-moi.

There's still something in his more contained performances today – at 90, he continues to tour, though he was hospitalized for an infection on Friday – that suggests he is both serious and unserious at the same time, a Gallic quality that tempers potential sentimentality.

Brawner captures that spirit of Aznavour best, letting out a knowing smile that shows he's aware he's being a bit much.

Stuck off in a corner, the band occasionally overpowers the singers in this acoustic nightmare that is Berkeley Street Theatre. Speakers hanging high above the singers try to compensate for this, but it undercuts the intimacy of their performances. There's a lot of disconnect – in language, style, time and sound – in What Makes a Man.

Theatre Review
Life, Death and the Blues: In search of authentic blues
October 2, 2014 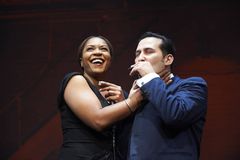 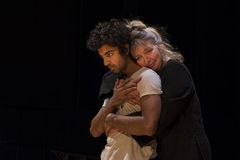