As the crowd was leaving the theatre after the performance of Winners and Losers, one man kept repeating "Formidable!" to his companion.

This captures to perfection the hour and a half of verbal fireworks we had just witnessed. The show is also a fine example of the quality theatre and dance productions that are part of Montreal's big ticket Festival TransAmériques.

Winners and Losers is written and performed by two towering artists from Vancouver. James Long is co-artistic director of Theatre Replacement, while Marcus Youssef performs the same role at Neworld Theatre. Both are companies with solid international reputations. Oddly, Winners and Losers is Long's and Youssef's first collaboration despite being close friends for many years.

To give some context, Theatre Replacement and Neworld Theatre are left-leaning, sociopolitical provocateurs. Their productions are designed to make disturbing statements about the human condition. Whether exploring the immigrant experience or the banality of social media (the former), or deconstructing questions about power, culture and belonging (the latter), both Long and Youssef strongly believe that theatre must be a true mirror of society.

Winners and Losers fits into the scheme of things because at its heart it examines the issues of competition and, by extension, capitalism, the engines that drive modern Western civilization. The structure is centred on two friends having a lively debate while drinking a bottle of beer. But, this being Long and Youssef, some words are said that cut to the quick, and the audience is sent reeling.

In their program notes, the men point out that the conflict that arises between them is all the more critical because of their shared system of belief. Friends, it seems, can be more cruel than enemies, and this makes for stronger theatre.

They begin as a game, two charismatic actors loving the repartee. One throws out a topic, and each explains why it is a winner or a loser. A topic is laid to rest when one or the other presses a bell. A simple structure, but very effective: a table, two chairs, two bells, with a chalked square on the floor define their boxing ring.

The men's virtuoso wordplay is a delight. Youssef thinks Montreal's municipal corruption is a winner because it gets things done. Long puts microwave ovens in the winner column because celebrity chef Jamie Oliver uses them. They ask the audience for a topic and someone shouts out "the Senate!" Long declares it a winner because he wants the job – all that money for doing nothing.

But unsettling questions start to arise in the audience's mind. Do they really believe in what they are saying, or does one take the opposing view just to play devil's advocate? And then there's the reference to Youssef's privileged background, which ultimately becomes the fuel for a firestorm that grows between them. Slowly but surely, a fun game becomes one-upmanship.

In this game of gotcha. Youssef seems earnest, while Long is sly. Long accuses Youssef of being a "tourist," meaning his upper middle-class background places him far from the leftist causes he supports. Youssef counters by stating that Long is not a good parent. Nastiness becomes the rule.

The director of Winners and Losers is Chris Abraham, artistic director of Toronto's Crow's Theatre, another company whose raison d'être is statement oriented. He provides the physical variety, having the men switch seats, or stand up together reciting facts about themselves, or engaging in a table-tennis match.

One assumes that Abraham also ensured that the show's suckerpunch had the right build. Keep the audience laughing while you sneak up on them, catching them by surprise with a brutal hit to the solar plexus. 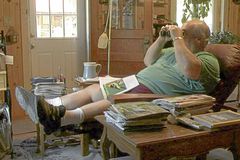 Festival TransAmériques: an international feast for the senses
June 3, 2011
Follow us on Twitter @globearts Opens in a new window
Report an error Editorial code of conduct
Due to technical reasons, we have temporarily removed commenting from our articles. We hope to have this fixed soon. Thank you for your patience. If you are looking to give feedback on our new site, please send it along to feedback@globeandmail.com. If you want to write a letter to the editor, please forward to letters@globeandmail.com.
Comments