This is the image that sticks for days afterward, appearing on the back of your eyelids when you close them: A pink robot floats through a black void while holding onto a white balloon. Is it Des McAnuff's self-portrait?

McAnuff paints this picture of melancholy technology near the end of Yoshimi Battles the Pink Robots – an eccentric and at times astonishing new musical about cancer that seems crafted by a sad android who yearns to be loved.

It's the director's first new project since his tenure as artistic head of the Stratford Festival quietly ended earlier this month, and it's a long-awaited return to creating unlikely theatre out of pre-existing popular music.

Based on an album of the same name by the oddball Oklahoman alternative group The Flaming Lips, Yoshimi opened last weekend at the La Jolla Playhouse, the same theatre where McAnuff's adaptation of The Who's Tommy premiered 20 years ago, and where his smash Four Seasons jukebox musical Jersey Boys got its start as well.

First announced to music-mag excitement in 2007, many had assumed that Yoshimi had dissolved somewhere along the line in development. Aaron Sorkin was involved at one point, but wandered off to create The Newsroom instead. McAnuff got busy with Stratford, a Dr. Zhivago musical and a burgeoning opera career, while the Lips became even stranger than before, releasing full-length cover albums and three-song flashdrives embedded in gummies shaped like a fetuses and skulls.

Perhaps a fire got lit under the project after Yoshimi made a number of best-albums-of-the-2000s lists from tastemakers such as Rolling Stone and Uncut.

A Lips musical makes a certain sense: The band is known for its colourful concerts, theatrical affairs full of dancing mascots, Santa Clauses and frontman Wayne Coyne rolling out over the audience in a giant bubble.

And yet, Yoshimi Battles the Pink Robots, clocking in at just 45 minutes with two instrumentals, is not an obvious conversion candidate for theatre, certainly less so than Tommy, a 1969 double album that The Who always billed as a "rock opera" (McAnuff will revive it at Stratford next summer).

Indeed, Yoshimi is a concept album where the concept slowly dissolves. Beginning with songs about a vitamin-popping woman with a black-belt in karate who fights off "evil-natured robots," the 2002 album gradually morphs into a series of meditations on mortality.

Instead of having Sorkin connect the dots with dialogue, McAnuff ultimately decided, wisely, to let Yoshimi's songs – plus a handful pilfered from other Lips albums – speak for themselves. He tells the show's story almost entirely by matching the lyrics up with images of humans, machines and hybrids of the two.

In the frenetic first number, Fight Test, McAnuff quickly sets up a love triangle though a motorcycle chase and a few projected text messages. Yoshimi (an excellent but objectified Kimiko Glenn) is a visual artist dating a hedge-fund manager named Booker (Nik Walker), while also being pursued or perhaps stalked by her eccentric ex, Ben (Paul Nolan, pride of Rouleau, Sask.).

It's Nolan who sings the opening number and who immediately calms any worries that the Lips' left-field music – it's been variously described as neo-psychedelic, space rock and dream pop – would get the Auto-Tuned Glee treatment and be transformed into aural ex-lax. No, Bill Brendle's orchestrations are as idiosyncratic as the album, while Nolan adopts a slightly pained, soft twang and goofy persona that is true to Lips frontman Wayne Coyne; it sounds very refreshing.

Quickly enough, Yoshimi has collapsed and is rushed to the hospital where she is diagnosed with lymphoma. It's at this point that McAnuff's story – he's credited alongside Coyne with creating it – splits into two different planes of reality.

Ben, who spends most of his time clicking through pictures of Yoshimi on Facebook, uses his arsenal of hand-held devices to conjure a martial-arts version of his ex based on medical metaphors he overheard at the hospital from Dr. Petersen (a flat Tom Hewitt, speaking the play's few lines of dialogue – is there a script doctor in the house?).

In this dream within the play that Ben directs like a pinball-playing Prospero, Yoshimi is stripped out of her hospital gown by nurses, briefly flashing her naked backside to the audience – a callipygian image McAnuff has lifted from his production of Henry V at Stratford this summer.

The difference here is that the nurses then transform into ninjas, while Yoshimi goes on to kick some in a karate uniform in what are the show's most inspired visual sequences.

Enter the robots: In a kind of live-action anime, they appear as discombobulated glowing parts. Certain robots are actors in LED-lined costumes that bring back memories of Power Rangers; others are puppet pieces created by Basil Twist.

The 'bots are evil when pink and good when white, though gradually the distinctions break down. "The universe will have its way / too powerful to master," sings Ben, all Zen, resurrecting the starry-eyed sagacity he brought to his Stratford-to-Broadway performance as the title character in Jesus Christ Superstar. "Is to love just to hate?"

His struggle, which probably shouldn't be more affecting than Yoshimi's against cancer, is to emerge from the technological bubble that separates him from the crowds and find a way toward unmediated love – to, as he says of his robotic alter ego Unit 3001-21, "learn to be something more than a machine."

That's a relatable journey for all contemporary cyborgs – and, with Ben standing in as a director within the show, it also seems to get at McAnuff's art, where a tension between gadget-heavy spectacle and human warmth is often evident. (Here's a colleague's joke: What do you call it when the end of a play is resolved by divine technical intervention? Deus Ex McAnuff.)

There is stuff here that works, and stuff that doesn't. When Coyne's idiosyncratic lyrics don't fit his narrative, McAnuff simply ignores their meaning. That's not really an issue: Music videos taught us ages ago to accept mixed messages. More problematic are the moments when McAnuff takes the words very seriously, inadvertently creating a comic effect.

McAnuff and his designers – Robert Brill on sets, Paul Tazewell costumes; Canada's Sean Nieuwenhuis videos – are less literal in their imagery. Perhaps inspired by Coyne's concert theatrics, McAnuff and his team use giant balls as a visual motif.

Then there's that lonely, floating pink robot and his big, white balloon. I'm not sure if this strangely moving show will travel as easily as him, but it's clearly a labour of love by McAnuff. As Unit 3000-21 sings of itself: "Is it wrong to think it's love, when it tries the way it does?" 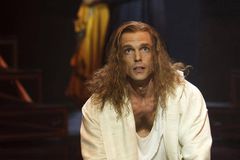 McAnuff vs. Cimolino: A tale of two Shakespeares
August 25, 2012 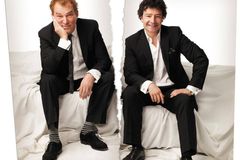 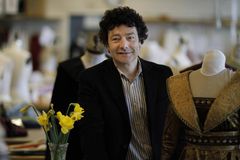