On the fifth floor of Toronto's National Ballet School, two women stand at opposite ends of a bright studio. I can't stop staring at their arms. The younger woman, stage right, pulls her violin bow in swift, purposeful strokes over the strings of her amped instrument. Across the room, the older woman curls into herself like a sleeping bird. Her arms start to unfurl in tiny sentient notches, then stretch like tilted wings on either side of her body.

Peggy Baker is a renowned modern dancer and choreographer coming to the end of a 40-odd-year career as a performer. Sarah Neufeld is a composer and violinist – a member of Canada's hugely successful indie band Arcade Fire – and in the upswing of an exciting international career. They're collaborating on a piece called fractured black, which sets one of Neufeld's more complex violin compositions to original solo choreography by Baker. Listening to the two Canadian artists chat after rehearsal, I'm struck by their excitement at working together, the palpable sense of respect and curiosity for each other's process and approach.

"It's your stamina I can't get over," Baker says to Neufeld. "Such intricate, involved music and you're always ready to keep going. You never want a break."

"Oh my God," says Neufeld, laughing. "I would be absolutely mortified if I was the one who needed a break after seeing everything that you do."

Baker and Neufeld have been brought together under the auspices of Fall for Dance North, the Canadian incarnation of a wildly popular New York dance festival, which debuts at Toronto's Sony Centre next week.

The local dance community has rallied behind FFDNorth because of its attempt to address some big dance issues in the Toronto arts scene – namely accessibility, regionalism and the exclusivity that comes from pricey tickets.

The three-night festival showcases premiere Canadian artists alongside renowned companies from all over the world, including the likes of the iconic U.S. company Alvin Ailey American Dance Theater. But the news gets better than that: All tickets are $10. It means that people who are frequently deterred by the cost of going to the ballet can see some of the country's best companies – and internationally celebrated choreographers such as Christopher Wheeldon and Ohad Naharin – for less than the cost of going to a movie.

"Toronto lags behind as an international dance town," says Istanbul-born FFDNorth artistic director Ilter Ibrahimof, who worked as a curator at Fall for Dance New York for several years. He loved the impact the festival had on that community, bringing a range of international companies and dance genres to audiences who typically stayed away from dance. After moving to Montreal, he approached Sony Centre's programming CEO Mark Hammond with the idea of a Canadian offshoot. "Fall for Dance is like a high-quality sampling menu. It lets people see a range of genres and figure out what they like, what they're interested in seeing more of."

The festival is composed of two different programs and features an array of form and style. On the Canadian front, we get the Toronto Dance Theatre performing Christopher House's classic Vena Cava; a piece by Cayetano Soto from Ballet BC (for which the company just received rave reviews at Jacob's Pillow Dance Festival in Massachusetts); and repertoire from Esmeralda Enrique Spanish Dance Company. The National Ballet of Canada, which performed at the New York festival in 2008, also jumped at the chance to get involved. Principal dancers Evan McKie and Kathryn Hosier will be performing a duet by the company's rising choreographic associate (and fellow principal dancer) Guillaume Côté. International companies include the Atlanta Ballet; DanceBrazil; a renowned classical Odissi company from outside Bangalore, India, called Nrityagram; and a critically lauded tap company from New York called Dorrance Dance. The Alvin Ailey American Dance Theater will perform in both programs.

On top of that, Fall for Dance North has commissioned two original works. In addition to the Baker/Neufeld collaboration, there's an exciting all-Canadian, First Nations hoop dance, curated and directed by Santee Smith, artistic director of Kahawi Dance Theatre.

"This is my first commission in 15 years," Baker says, explaining that the opportunity to work with Neufeld essentially pulled her out of retirement as a performer. "I wanted to work with a younger woman – a new artist from a different generation."

Baker likes the way the image of two women occupying opposite ends of the stage suggests something temporal – the trajectory of an artistic career. She adds that live violin accompaniment offers the opportunity for a certain onstage rapport and interaction that you can't get with a cellist or pianist. And Baker relishes the choreographic challenge of Neufeld's textured musicality. For Neufeld, collaborating with a dancer feels natural, inevitable even. "My music is just so physical to begin with," she says.

In Ibrahimof's mind, this year's Fall for Dance North is only the beginning of what he thinks the festival can do. In future years, he's hoping to commission longer pieces and to add a second stage, allowing for more intimate performances. "Toronto is a great place for Fall for Dance because of its extreme diversity, its openness. In a way, it's almost better-suited to this festival than New York." 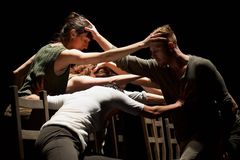 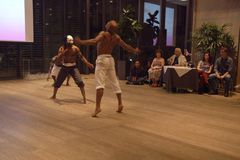 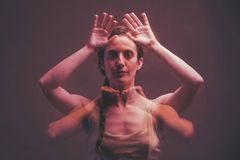