Some years, December rolls around with a theatre critic hard-pressed to find enough truly worthy contenders to fill out a top 10 list. Not so in Toronto in 2014: it would be easy to compile a top 20.

Four theatre companies dominate this list. Following a period of adjustments minor or major, Canadian Stage, Soulpepper and Tarragon Theatre are all back in the groove. Meanwhile, The Theatre Centre has jumped to the front of the city's indie scene since opening the doors at its new Queen West "live arts hub and incubator" in March. After all the fighting and right-sizing of recent years, Toronto theatre seems to be relaxing – and taking artistic risks that are paying off.

2. Concord Floral, The Theatre Centre
Rapidly rising playwright/director Jordan Tannahill recruited 10 actors age 16 to 21 for his latest suburban legend, a topical ghost story set in Vaughan that was Degrassi meets The Decameron. Easily the best new play of the year.

3. Lungs, Tarragon Theatre
It's impossible to imagine a more perfect production of British playwright Duncan Macmillan's love story about a couple afraid of environmental apocalypse than director Weyni Mengesha's. Actors Lesley Faulkner and Brendan Gall were like two peas in a pod in it. Returns to Tarragon starting Dec. 31.

4. Kiss & Cry, Canadian Stage
Stan Douglas's Helen Lawrence got the bigger buzz, but this unique show from Belgium was the more magical mix of live video and theatre. Choreographer Michèle Anne De Mey and filmmaker Jaco Van Dormael made something beautiful and moving out of hands dancing around on miniature sets. Coming back in February, 2016.

5. Tartuffe, Soulpepper
Laszlo Marton 's productions can leave you scratching your head, but the Hungarian director nailed it this time around with this classic comedy by Molière – revealing the true nature of the play in the course of his daffy and daring deconstruction of it. Soulpepper MVP Diego Matamoros was back in top form, devouring everything on stage as the titular hypocrite.

6. Of Human Bondage, Soulpepper
Head honcho Albert Schultz took his creativity as a director to the next level with this soulful adaptation of W. Somerset Maugham's 1915 coming-of-age novel. It picked up seven Dora Mavor Moore Awards – enough to ensure its return in May, 2015.

7. Cock, Studio 180
Studio 180 began what they're calling a LTR (Long-Term Relationship) with the Theatre Centre with this sharp Mike Bartlett play about a bisexual man who can't decide whether to form an LTR with a man or a woman. Joel Greenberg's set-less production starred the excellent Andrew Kushnir as the conflicted soul at the centre of a show that, under its sexy surface, was really about the tyranny of choice.

8. An Enemy of the People, Tarragon Theatre
Richard Rose recreated hip German director Thomas Ostermeier's paintball staging of this endlessly topical Henrik Ibsen play with a top-notch Toronto cast. As exciting as the show itself was hearing from the young theatre artists inspired by it.

9. Of Mice and Morro and Jasp, U.N.I.T Productions
Heather Marie Annis and Amy Lee have done a clown sister act as Morro and Jasp for ages, but they (and director Bryon Laviolette) thickened their shtick with this lampoon of John Steinbeck's Of Mice and Men. Funny and sweet, but it also cleverly skewered an underfunded theatre scene whose obsession with classics can make it tolerate old prejudices.

10. A Midsummer Night's Dream, Stratford Festival
One brief Stratford detour: I thought I never needed to see another Dream in my life – but it turned out I needed to see two. Chris Abraham's joyous version of the comedy and Peter Sellars's dark deconstruction of it worked wonderfully with one another.

Character Walk Of The Year
Patrick Galligan wins this coveted award this year for his angular performance as a mad draper in Edward Bond's The Sea at the Shaw Festival. His sudden, jerky movements made you feel as if the whole world was off balance – not just his character. A superb performance in a great production by Eda Holmes that would be on the above list if it went to 11.

Theatre Review
'Donny and Marie: Christmas in Toronto' was an Osmond education for me
December 10, 2014 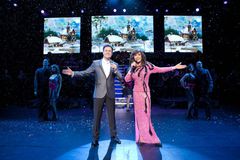 Theatre Review
Cinderella: A Ross Petty panto that leaves you feeling like the Grinch
November 28, 2014 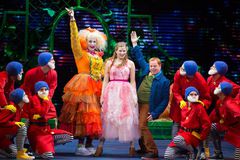 Theatre Review
Charlotte's Web: What I learned from a five-year-old playgoer
December 3, 2014 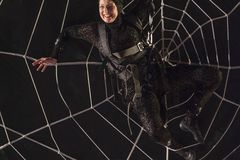 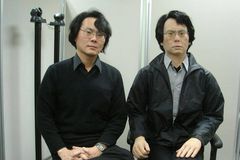 Toronto’s Jim Millan and his long trip from Crow’s to ‘credentialled’ director
November 28, 2014 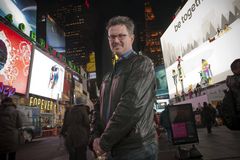