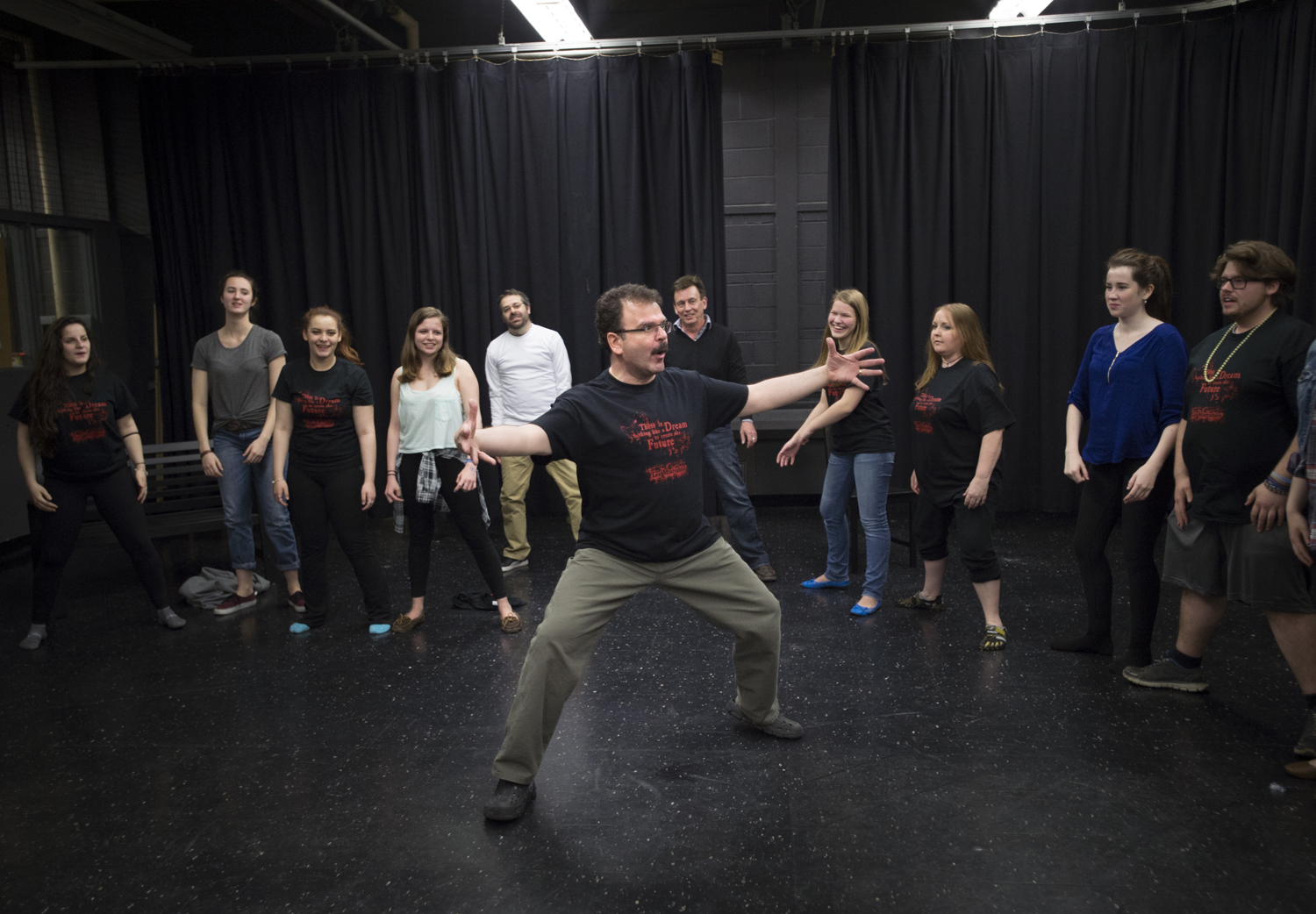 Dramatic Arts teacher and Les Misérables director Greg Danakas leads students through a warm-up before rehearsals. (All photos: Darren Calabrese for The Globe and Mail)


“We’re supposed to write an essay about who we are, and not like your favourite colour and where you live and all that stuff, but who you really are, whatever that means… What am I even supposed to say?”
– Rosie in Who Is Rosie North? by Olivia Costes

After two days of bonding exercises, the Acting Class at the Toronto high school is finally going to read through Tim Kelly’s (non-musical) stage adaptation of Les Misérables for the first time.

Drama teacher Greg Danakas settles behind a small desk, while 25 students from Grade 10 to 12 gather around him in a circle on the floor. “Let’s read this frikkin’ play!” he says – and you’d never guess the Tim Hortons coffee in front of him was decaffeinated.

“Is anyone Instagramming this?” asks Bradley Plesa, the Grade 12 student who will be playing prisoner-on-the-run Jean Valjean.

Listening to these kids immerse themselves in their characters for the first time, it’s clear how much work – and learning – is ahead of them.

The students pause every page or so as Mr. Danakas defines words such as “cleric” or “consumption” or explains a historical event referenced in the play, like the July Revolution. “It’s a French revolution, not the French Revolution,” Mr. D says – a recurring refrain for the rest of rehearsals.

It’s also clear, however, that Lakeshore’s acting students are up for the challenge. (Unlike me – I reluctantly declined Mr. Danakas’s kind offer to play author Victor Hugo in his dystopian production of the play.)

Mr. Danakas chose Les Misérables, in part, to cast Bradley as Valjean – a dramatic role that they both agree will stretch him as he prepares to audition for the National Theatre School and York University. It’s a leap forward from Porthos, the wine-swilling womanizer that Bradley played last year in The Three Musketeers.

“Porthos was big and boisterous, like Bradley, but Jean Valjean will require more – well, acting,” confides Mr. Danakas after class. “He needs to be more honest – well, not honest, but rooted.” 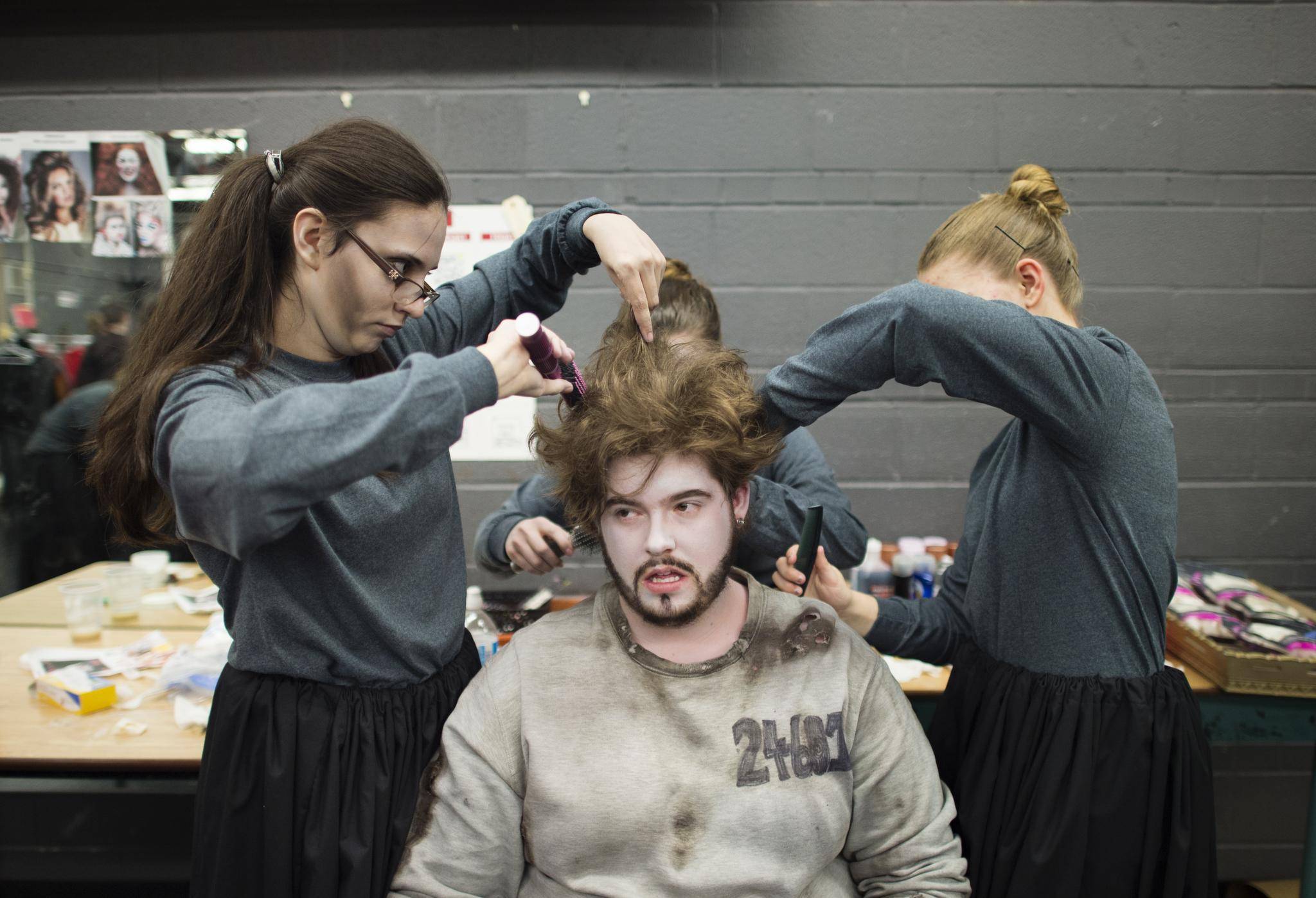 Bradley Plesa has his hair and makeup done before the first dress rehearsal of Les Misérables at Lakeshore Collegiate Institute in Toronto on May 19, 2015. (Darren Calabrese for The Globe and Mail)

There’s a paradox in what Mr. D is saying – but it’s the paradox at the heart of performance. To become a character on stage, sometimes an actor digs deep into himself.

This is what makes theatre an exciting, bifocal experience for audiences (and critics) too: From your seat, you are watching both an actor and a character – and it is, practically speaking, impossible to know where one ends and the other begins.

When you’re dealing with teenager actors, however, a performance can be even more complex – because many of them aren’t sure who they are IRL yet.

As it happens, Olivia Costes – playing a nun named Sister Simplicity in Les Misérables – has written a play about just that. “It’s about a girl who is trying to figure out who she is,” says the 18-year-old, who is in the midst of applying to post-secondary programs in theatre and visual arts.

Who Is Rosie North? is Olivia’s contribution to Play by the Lake – a festival of plays written and directed by students that’s part of the rich drama program at Lakeshore.

Olivia kindly let me read her play. Rosie, a young visual artist, must complete an English assignment about who she is amid troubles at home: Her father has left, and she and her mother have to move in with a “moody and strange” woman named Janelle.

At the same time, Rosie has a new boyfriend and is applying to a prestigious school for the arts. By the end of the play, she has been rejected by both – and has to figure out what that means about who she is.

Olivia’s Rosie North reminds me of many of the teens in Mr. Danakas’s acting class – sometimes they don’t seem to be acting so much as trying on roles to see if they fit. 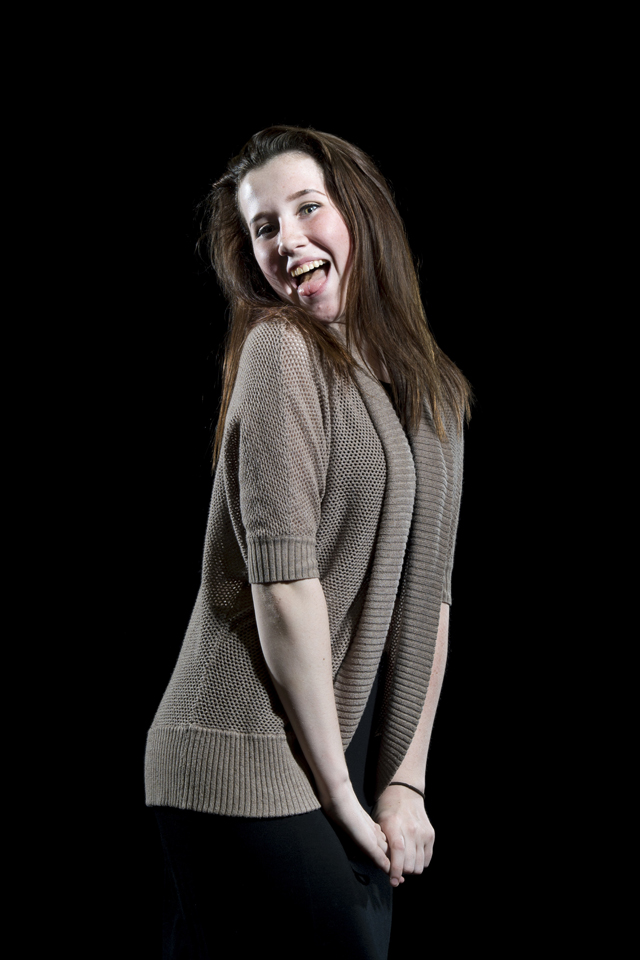 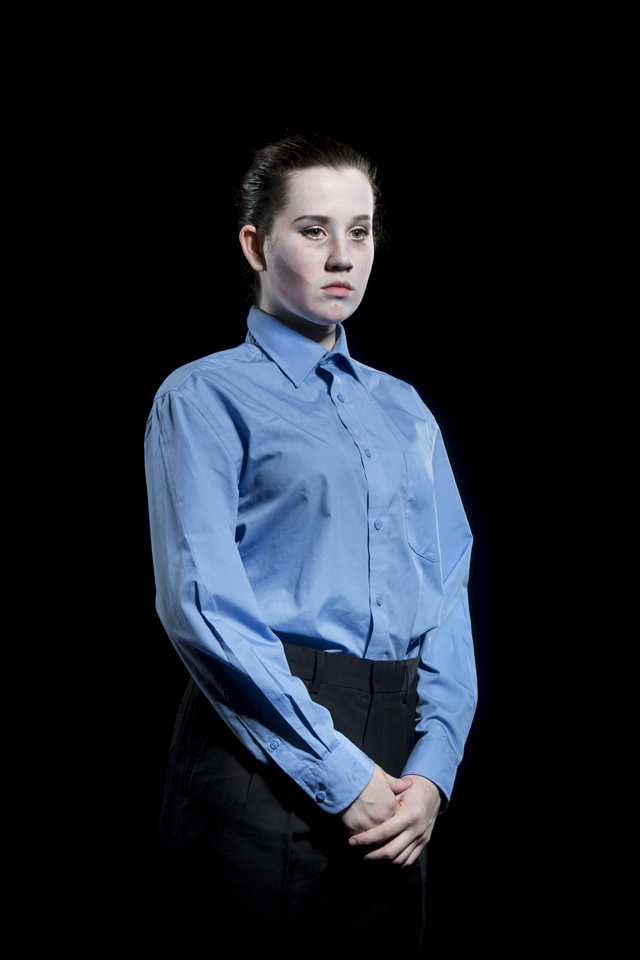 And sometimes they do. Ember Cope, a Grade 12 student playing a policewoman in Les Mis, was D’Artagnan in The Three Musketeers last year – a role that is usually male.

“It completely changed me,” she tells me, entwined with drama-club president Hilliary Lyn on a couch in Mr. Danakas’s office at one early rehearsal. “I’m no longer the little pixie girl.”

It’s a few weeks later now, early March, and Who Is Rosie North? is ready for its downtown Toronto debut.

After a successful run at Play by the Lake, Olivia’s play is now being performed at Central Toronto Academy, competing at the district level in the provincewide Sears Ontario Drama Festival.

A dozen students from the Lakeshore acting class have come in from suburban Etobicoke to support their friends – and Jesse McCormack fills me in on the backstage drama of the day when I join them.

During second period, the young woman who was supposed to play the part of Janelle dropped out – her boss had threatened to fire her from her after-school job if she didn’t show up that evening.

In a panic, Olivia went to the drama studio during lunch in hopes of finding a last-minute replacement. Luckily, one of her Les Misérables colleagues was available and willing to learn the role with less than eight hours to curtain.

It was Bradley, of course. So the excitement in the audience is higher than usual as everyone is wondering: Will he be able to pull it off?

While Bradley crams backstage, sound technician Anton Bekker and lighting technician Elliot Robson are also getting to play their roles in a new auditorium with barely any rehearsal. They seem relatively relaxed about it all, however.

Like most professional theatre crew members I’ve met, Anton and Elliot, who are working on Les Misérables too, leave the drama to the actors.

Elliot, a Grade 10 student, discovered Lakeshore’s drama program that fall through a friend from Pokémon league. “I love doing the lighting – it’s one of my favourite things to do, really,” he says.

While Elliot finds the technical side of theatre fascinating, he has no interest in performing. Perhaps that’s because he’s already confident about who he is. “I’m trans,” the 15-year-old says later on, when I ask him how he’d like me to refer to him in this series.

“Coming out is weird,” Elliot tells me. “People can accept coming out as gay more than coming out as transgender.” Lakeshore, nevertheless, is a very accepting place, he says – and, indeed, if he stands out during rehearsals, it’s due to his quiet dedication to his craft. 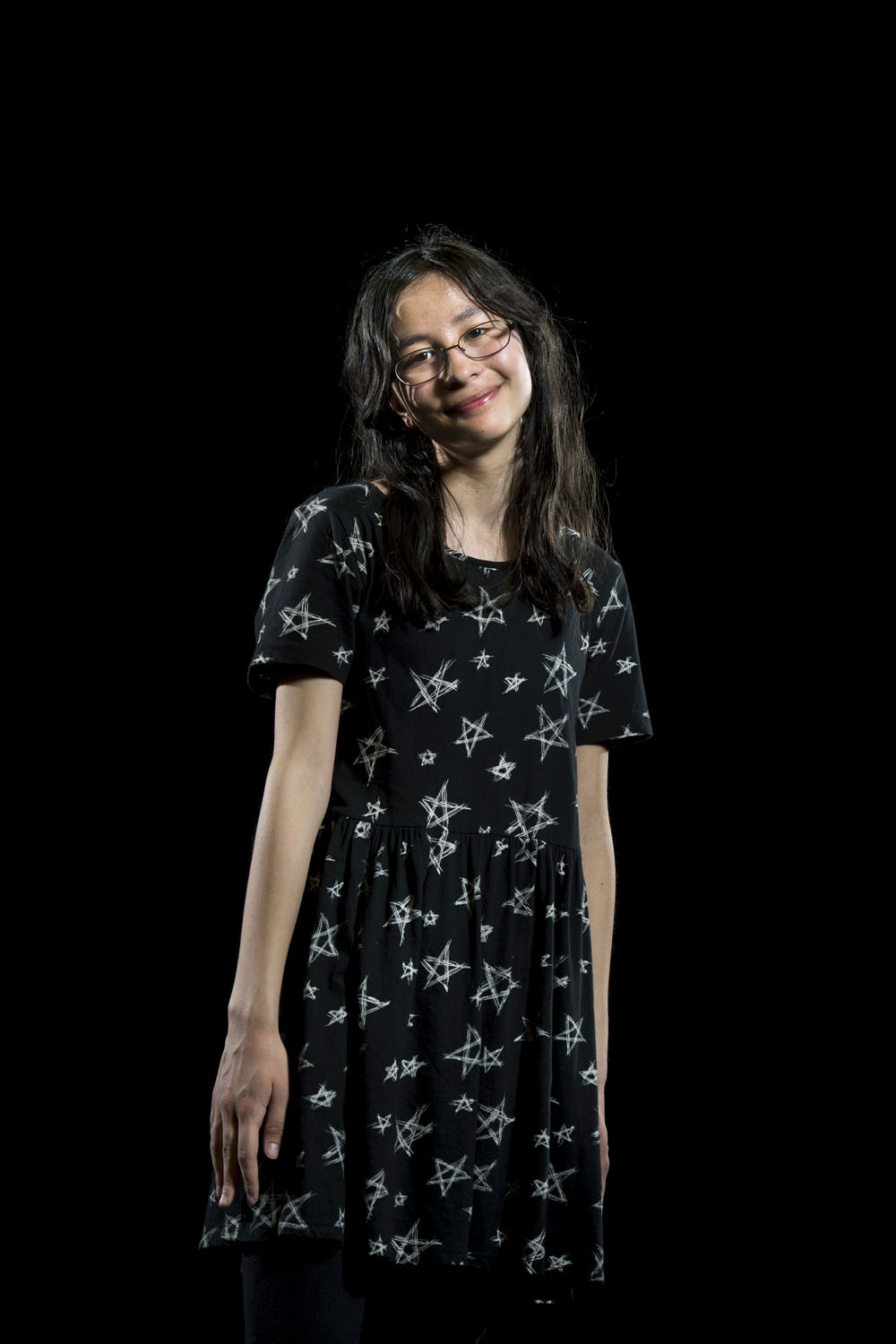 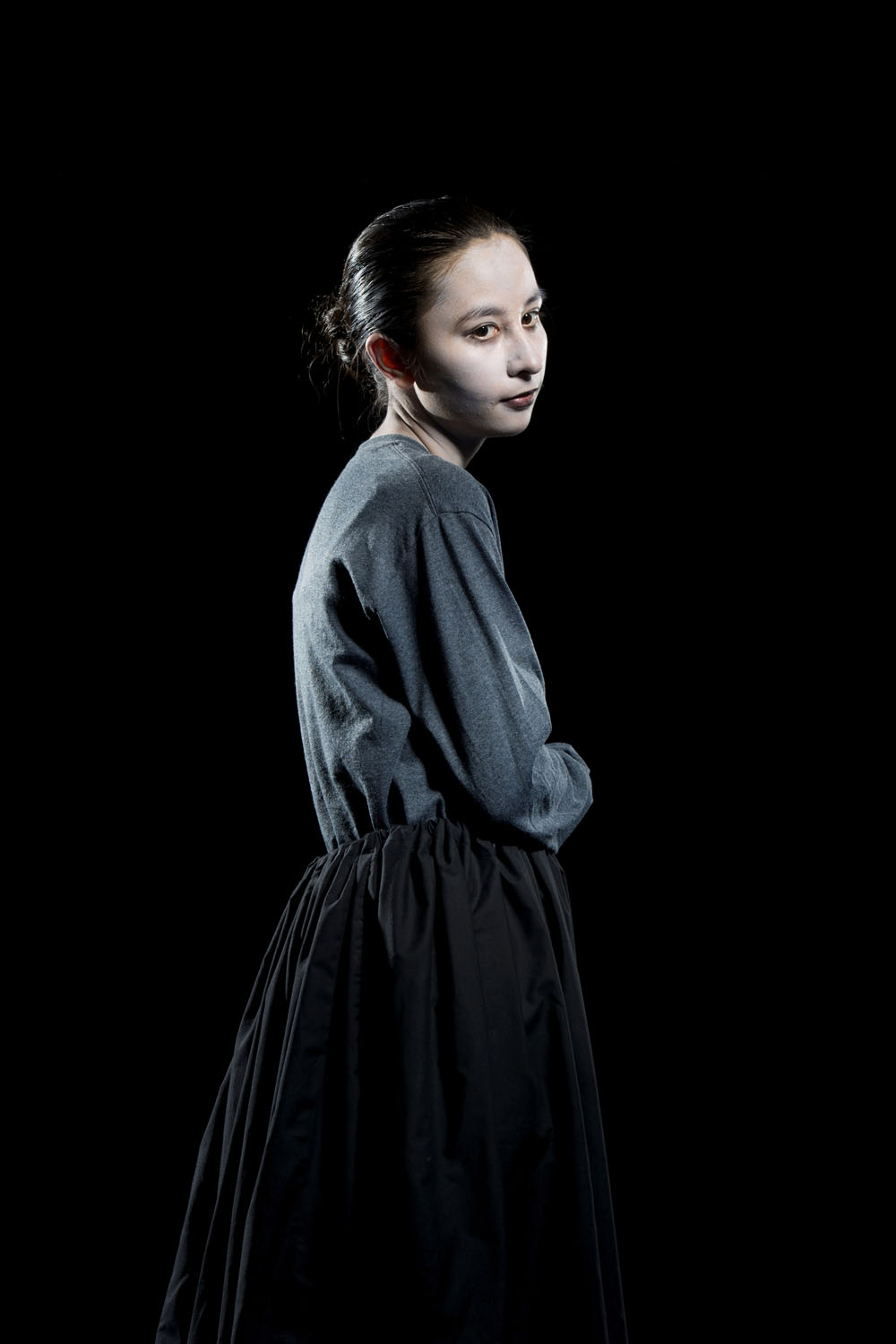 A STAR IS BORN

As soon as Bradley swaggers onto the stage in Who Is Rosie North? – as Gerald, rather than Janelle; Olivia made a quick rewrite – it’s clear he’s going to succeed. He gets the most laughs of anyone on stage as Rosie’s roommate from hell, obsessed with his collection of vases.

“Switching [the character’s] gender didn’t really make a difference,” Olivia says, afterwards, pleased with how everything had gone. “I wasn’t too worried because Bradley’s probably one of the best actors in the school.”

Bradley, full of adrenaline, is even more exuberant than usual as he is mobbed by friends afterwards. “That was extremely, extremely stressful!” he says. “I’m so happy!”

“I was trying so hard not to laugh, I nearly threw up!” Jesse M. tells him.

I pull out my digital recorder and Bradley gives me his take like an athlete coming off the field. “Basically, what happened was I was bombarded with a character,” he says, “and I was like, ‘I don’t like this character at all.’ ”

He takes a pause – and a glint comes to his eye. “Until we started working,” Bradley says. “Then I was like, ‘This is me.’ ”

Can Jean Valjean be Bradley, too?