Toronto musician Owen Pallett has a very clear idea of the relationship of music to politics. To him, they are one and the same thing. Pallett is one of the most interesting musical forces of his generation, equally at home in pop music and in whatever we call that other kind of music the symphony presents – most comfortable where the two intersect. And now he is the co-curator of the Toronto Symphony Orchestra's annual New Creations Festival, which runs through March 11 at Roy Thomson Hall.

"I don't think one has to try to make work political," Pallett says. "You can just intuit the political implications of every piece of music. I've always said there's more political information contained in a pop recording in the way they've miked the snare drum than there is in the actual content of the lyrics. It's automatically political to have a gay black man make music for the concert hall. It's automatically political to have a female composer on the program."

Pallett's belief in the all-encompassing political and social implications of absolute music is not as new an idea as it may seem. Beethoven, Mozart, Wagner and Stravinsky would all have understood exactly what Pallett is talking about. It's only recently that the classical world has retreated into a walled estate of musical purity where the social and the aesthetic are denied interaction with one another (although the construction of the wall itself is a political act). The New Creations Festival is one of the most exciting weeks of the year in Toronto because, for a moment, the new in music helps breach that wall, helps remind us of the inherent communicative power of music.

That's not to say that this year's festival is full of messages and platforms and explicit statements. Pallett's point is that music expresses social values, in subtle, subliminal ways. This year's New Creations is, in fact, one of the most eclectic and multidimensional in many years. There's a wonderfully wide range of musical styles, performers, genres and personalities.

On March 8, Canadian violin virtuoso James Ehnes will perform the world premiere of a relatively conventional Violin Concerto by Aaron Jay Kernis. The Kronos Quartet will present a concert on March 11 featuring two world premieres by two Canadian composers, Cassandra Miller and Nicole Lizée, each who are, in their own way, navigating the relationships between musical genres. Miller focuses often on the relationship between our musical past and future, Lizée on the intersection of film, video, popular and "classical" music.

Then there are the confident eclecticists, suchPallett and the American Nico Muhly, open and secure in many forms of music, breaking down, in their own minds and experience, the artificial boundaries of genre and form and style that often serve to obscure, rather than illuminate musical truth.

There are works by Jorg Widmann, a more traditional European modernist, and Jordan Pal, the TSO's composer-in-residence. Finally, Tanya Tagaq, Canada's gift to the world of music that transcends all known boundaries, along with Christine Duncan and Jean Martin, will present Qiksaaktuq, a TSO commission, like so many of the pieces on the three programs. All in all, one of the most interesting and potentially explosive New Creations Festivals in recent memory.

And the festival, as well as breathing into the concert hall the life of the moment, of the politically conscious now, of the future as it becomes the present, also reminds us that so many of the old nostrums about classical music and pop, traditional music and art music, "serious" and "non-serious" musics – all these old divisions – are increasingly obsolete. "People always ask me how we can bridge these two worlds," Pallett says, referencing popular and serious music. "They don't realize that the bridge already exists. There's so much more crossover than people realize. We don't need to reconcile highbrow and lowbrow, so to speak. This genre of music already exists and it can exist in the concert hall and it can exist in a club – it can exist anywhere."

For three concerts over a week and a half, that world exists very exuberantly at the Toronto Symphony. The world of the present takes over, for a moment, the world of the past in Roy Thomson Hall.

What composer Owen Pallett is watching, just saw and is listening to
March 1, 2017 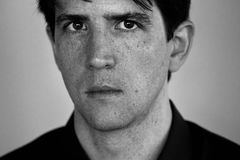 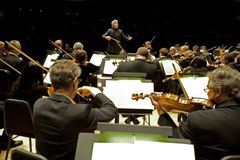