Swan Lake and other full-length fairy tales of the 19th century still pay the bills for ballet companies. But why do long-form choreographers insist on making new fairy-tale ballets?

Two large cases in point: Twyla Tharp's The Princess & the Goblin (which the Royal Winnipeg Ballet presents through Sunday) and Christopher Wheeldon's Alice's Adventures in Wonderland (coming to the National Ballet of Canada in November). These are major investments for the companies. Each paired up with a foreign troupe (Royal Ballet for Alice, Atlanta Ballet for The Princess) to commission a big-name choreographer and to outfit the results. The hope is that these new ballets will become evergreens of the companies' repertoires – the NBC is reviving Alice less than a year and a half after its first performances.

The market explanation is the simplest: Storybook ballets sell, so make more of them. But sylphs and fairies have a deeper hold on the art. They were present at the birth of a key part of ballet's movement vocabulary. They were the reason dancers cultivated the illusion of weightlessness that culminated in the pointe shoe. Marie Taglioni dancing on point in La Sylphide was the 1830s version of state-of-the-art visual fantasy, and it changed ballet permanently.

It follows that ballet, with its conservative technique, retains an affinity for beings that aren't tied to natural laws the way we humans are. It also follows that modern storybook ballets tend to be partly about ballet itself. As my colleague Paula Citron noted in her review in June of 2011, Alice is Wheeldon's homage to academic ballet, studded with references to famous ballets of the past. Tharp's Princess, to judge from advance video clips, uses far more ballet movement than the cheeky modernist works that made her reputation. Yes, she had classical dancers at hand this time, but that was hardly a limitation. The RWB is also adept at works closer to modern dance, the kind of works that usually end up in ballet companies' mixed programs.

There's another, more subtle reason that ballet and its public prefer fairy tales. Our experience of ballet illusion has changed, and paradoxically it's this change – not just the staying-the-sameness of Swan Lake – that brings us back.

Recent film is full of extraordinary beings, from hobbits to superheroes. We're used to seeing characters who can morph into something else before our eyes, and who can fly not just over the stage but over the city. CGI has completely outstripped the modest supernatural illusions of ballet. But it hasn't displaced them, because they still happen with real bodies. This isn't just "the magic of live performance," which applies equally to Giselle and Death of a Salesman. Nineteenth-century audiences responded directly to the illusion of a weightless creature on stage. When we go to the ballet, we see more of the real physicality that is completely absent from Hollywood's CGI spectacles. We enjoy the illusion because we know it's not a trick of computers, but a labour of real bone and sinew. Ballet puts the nervous system back into the performance of fantasy.

Small wonder RWB is calling its entire season Fairy Tale Fantasy. Aside from Jorden Morris's version of Moulin Rouge, the schedule is wall-to-wall goblins and fairies. After The Princess & the Goblin and that winter stalwart, The Nutcracker, the company does The Sleeping Beauty .

It's still worth asking when and whether we'll see a revival – or would it be a birth? – of really modern story ballet. Imagine ballets about the likes of you and me, reflecting the human dramas of our time. Wouldn't that be fantastic? 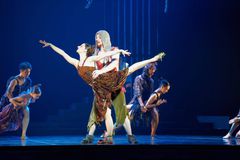 Theatre Review
A pair of dances inspired by literary gems and wrapped in startling beauty
October 14, 2012 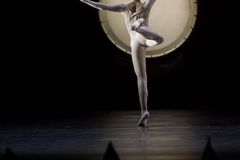 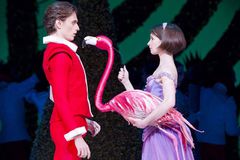