A ship sinks near a mysterious island; a survivor undergoes a sea change in spirit. Oil and Water, the latest creation from Newfoundland's Artistic Fraud company, certainly has its theatrical forebears.

Unlike Shakespeare's shipwrecks, however, the events of this uplifting tale are true.

In February, 1942, the USS Truxtun capsized near the coastal Newfoundland town of St. Lawrence. Among the 46 sailors rescued from the freezing waters was Lanier Phillips, an African-American private originally from the segregated south and the only black man on board to survive.

Phillips was taken to the home of local woman Violet Pike, who tried to wash the oil off his body only to discover it was his natural skin colour.

Violet had never seen a black person before; Lanier had never been treated with kindness by a white person.

It was Phillips who emerged from this experience altered. His earliest memory had been of seeing his elementary school burnt to the ground by the Klan; now, emerging reborn from the ocean, he glimpsed what, at first, he could only imagine as an angel.

He'd talk about his two-day stay in St. Lawrence for the rest of his life, during which he became the U.S. Navy's first black sonar technician and marched with Martin Luther King in Selma. (He died in March.)

Robert Chafe's script splits Phillips's story neatly into before and after. In the first act, we see the racial hierarchy in place on the USS Truxton through conversations between young and angry Phillips (Ryan Allen) and sailors both black and white, as well as with his great-grandmother Adeline (Neema Bickersteth) – a former slave whose voice constantly fills his head with warnings about white folks.

At the same time, Chafe paints a bleak but beautiful picture of the mining town of St. Lawrence. We encounter the illiterate Violet, played with just the right mix of sweet and sour by Petrina Bromley, and her sickly husband John (Jody Richardson), who seems to be developing silicosis. There's also John's nephew Levi (Mark Power), overly eager to be working underground, and local photographer Ena (Alison Woolridge), an outcast in her community due to her creativity.

Where Chafe's script takes a wrong turn is in overlaying another narrative, set 32 years after the USS Truxton sank.

Now living in Boston, the adult Phillips (Jeremiah Sparks) and his young daughter Vonzia (Starr Domingue) are caught up in the racial violence that surrounded attempts to integrate local schools with busing.

Phillips eventually tries to calm his daughter with his shipwreck tale, but the link between that world and the rest of the play is never clearly established. It primarily functions as a harmonic device. And so, the dialogue spins in circles as Vonzia sits around with fake blood on her forehead waiting for an echo in the past to allow her to be cleaned as well. At a certain point, I wanted to climb up on stage and wipe that blood off myself.

This is director Jillian Keiley's musical approach to staging getting in the way of the characters. When it comes to the events of 1942, however, Keiley – newly appointed artistic director of National Arts Centre's English theatre – hits all the right notes.

Andrew Craig's choral music helps her fill the stage with a mix of gospel and Newfoundland folk, while the rescue and rebirth of Phillips is truly movingly presented on Shawn Kerwin's ship-inspired set.

The residents of St. Lawrence don't undergo quite as dramatic a transformation. Indeed, they simply show their true colours in responding to the tragedy.

What happens here is more subtle – a shifting of perceptions, both within the community and without: Illiteracy does not always equal ignorance; isolation is not the same as close-mindedness.

When the story of Lanier Phillips first was told a half century ago, it was often presented as a "Newfie" joke: Can you believe how dumb this woman was that tried to wash the colour off a black man's skin? Now, of course, we see it's not a joke at all, but a miracle and a message of hope.

Oil and Water continues in Toronto until May 6. It appears in Calgary as part of the Magnetic North Theatre Festival in June and tours Newfoundland and Labrador June 19 to July 6. Visit www.artisticfraud.com for more information.

Love and Chance: Second wind saves this classic gem
May 8, 2018 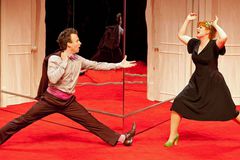 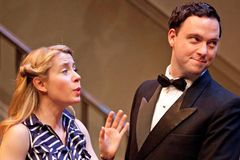