Two valuable antiquities have been stolen from the Montreal Museum of Fine Arts in a brazen daytime theft.

The theft occurred in late October, 2011, but details were not released to the public because of an ongoing investigation by the Sureté du Québec and AXA Art, one of the world's largest art-insurance companies. Video footage of a suspect has been released, according to a statement from the museum, issued this week.

One of the stolen pieces is a marble head from the Roman Empire, dating from the first century AD. The second, and far more valuable item, is a Persian low relief of the head of a guard, dating from the fifth century BC. It is made of sandstone, and estimated to be worth hundreds of thousands of dollars.

Both pieces are small, about 20 by 21 centimetres, and had been part of the permanent collection of the Montreal art institution for decades. They were stolen during visiting hours. A lengthy review of video footage and interviews with museum staff has produced a clip of the suspect, who is male, about 5 foot 7, and wearing jeans, running shoes, a black jacket and dark baseball hat as he strolls through the museum.

Mark Dalrymple, an art-theft recovery specialist and London-based loss adjuster with Tyler & Co., is working on behalf of AXA Art, with the museum and the Sureté du Québec. Dalrymple has investigated a number of high-profile cases around the world, and has succeeded in recovering, among others, a Leonardo da Vinci painting stolen in Britain and two John Turner paintings stolen from a museum in Germany. He was contacted about the Museum of Fine Arts theft in November, and flew to Montreal to assess the case.

"The museum is terribly disappointed, not least because they offer a low-level-looking security system to enable visitors to see these items up-close," Dalrymple said. "Beyond the financial value of these pieces, there is the loss to the people of Quebec. The museum would very much like to see these antiquities returned."

A "substantial" reward is being offered for the return of the two pieces, although Dalrymple would not specify the amount. "It's in keeping with the value of the items," he said when contacted in London.

"We now have a clear clip of a suspect, retrieved from the museum's security-camera system. I can tell you that we are almost certain the person is local. He is Canadian, and probably Québécois," Dalrymple said. "We're now appealing to the public, and the world, to help us."

An additional reward of $10,000 is being offered to anyone who can identify the suspect. "We invite anyone with information to contact the Sureté du Québec," Dalrymple said.

The theft from Montreal's largest art institution has parallels to the 2004 theft from one of the largest art institutions in Ontario, in 2004, when thieves stole a number of small ivory statues during visiting hours from the Art Gallery of Ontario. Dalrymple flew to Toronto to help with that case and facilitate their return to the gallery. In both thefts, small objects were lifted from an exhibit and carried out past security systems. In both cases, there was a video clip of suspects, and a reward offered for the return of the art.

The timing of the Montreal theft, by coincidence, occurred 39 years after the largest art theft in Canadian history, when 18 paintings were stolen from the Montreal Museum of Fine Arts in September, 1972. In that case, a group of armed men entered the museum in the middle of the night through a skylight under repair and disarmed security guards. Seventeen of those artworks are still missing, including Rembrandt's Landscape with Cottages.

Quebec is the only province in Canada to have a dedicated unit of art-theft investigators, operating under the Sureté du Québec. Their cases show that the business of stolen art is a thriving industry, worth at least $20-million annually in the province. Antiquities like those stolen from the Montreal museum are in high demand in the global marketplace, easily transportable across international lines to, for example, New York or London.

They are also irreplaceable, which is why Dalrymple said: "These cases are not just about writing a cheque. An insurance company can do that, of course. But this is about helping the museum recover the stolen items. This is a free museum, open to the public, who can go and see these objects. We're dealing with criminals who have deprived the public of that experience, and we want to make the effort to get this property back. We're not going to do this for a Rolls-Royce, but we're looking at precious historical cultural property. The issue here is that we, AXA, and the Museum of Fine Arts want to recover this property. We're hoping that once the photographs of these stolen items are released, no matter where in the world these pieces go, no one can sell them."

Dalrymple's message to whoever may be in possession of these stolen antiquities: "You should just hand them back now, and be done with it. You will not be able to sell these items. Not now, and not in five years, not anywhere in the world." 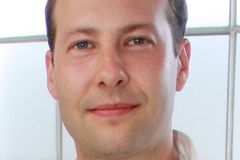 Man arrested in theft of Riopelle lithographs
June 3, 2010
Follow us on Twitter @globearts Opens in a new window
Report an error Editorial code of conduct
Due to technical reasons, we have temporarily removed commenting from our articles. We hope to have this fixed soon. Thank you for your patience. If you are looking to give feedback on our new site, please send it along to feedback@globeandmail.com. If you want to write a letter to the editor, please forward to letters@globeandmail.com.
Comments