The journalists made him do it.

Almost two years ago, the Brooklyn-based monologist Mike Daisey travelled to China on a personal fact-finding mission. A life-long Apple fan-boy now in his mid-30s, Daisey had heard stories about the terrible working conditions at Apple's suppliers. He thought it might make for good drama.

It did; just not entirely the sort of drama he had in mind.

For more than a year, starting in the spring of 2010, Daisey performed the show that resulted from his China trip, The Agony and the Ecstasy of Steve Jobs, to audiences around North America. He gave interviews in each city, simultaneously appealing to reporters to wake up to the horrors in China and slamming their colleagues for turning a blind eye. While performing at Vancouver's PuSh Festival in 2010, he told a reporter for the Georgia Straight, "With fascism, you get no [expletive deleted]journalism."

Not quite true: The New York Times, among others, had already carried numerous troubling stories, with prominent placement. But here was a gifted storyteller, bringing the news of the day from a foreign land to his fellow North Americans. His story fit smoothly into a number of prevailing narratives: about Westerners' guilt over our quality of life, and about our culture of lazy journalism, which had apparently ceded responsibility for vital investigations to amateurs like Daisey. For the Straight, and many others, that was good enough.

Then, last weekend, Daisey was exposed for fabricating some of the most trenchant details in his monologue. The pack response was explosive, and uniform. Journalists from across the world lit into him, with some major outlets such as The Washington Post and The New York Times – which have ugly incidents of fakery in their history – publishing at least half a dozen pieces.

And while Daisey's sin was severe, his fabulism seems to have touched a nerve in the media that has become more inflamed since Janet Cooke won a 1981 Pulitzer for her fabricated story of an eight-year-old heroin addict, and Jayson Blair's malfeasance led to the resignations of the Times's two most senior editors. Daisey's success with his work of theatre-as-journalism comes at a time of growing journalism-as-theatre. And it can be hard, frankly, to compete for air-time when you're bound by the facts.

Daisey's undoing began in January, when he collaborated with the groundbreaking radio program This American Life to produce an episode featuring a 39-minute excerpt of his show, which was then in the middle of a six-month run at New York's Public Theater. The program was a hit: a record number of people downloaded the episode. And Daisey vaulted to a new level of fame, his status as an expert on the issues reinforced by appearances on TV and radio news shows, and a feature interview with Bill Maher.

Then, last Friday, This American Life announced it was retracting the Apple episode because producers had learned it "contained significant fabrications." The program elaborated on the findings over the course of an extraordinary hour of radio that will find an enduring place in journalism classes.

It included a report by the China correspondent for the public radio show Marketplace who had discovered the fabrications: While Daisey had claimed he'd met underage workers, his translator insisted they hadn't; his translator also couldn't recall one of the play's most heartbreaking episodes, in which Daisey shows an iPad to a crippled factory worker, who pronounces it to be "a kind of magic."

In the wake of last weekend's show, people who had seen Agony and Ecstasy said they felt betrayed because they'd been led to believe it was entirely true: The playbill, after all, had declared it "a work of non-fiction." Creators of a Toronto production of the play scheduled for May announced that they are going ahead, but will incorporate the fabrication incident and its fallout into their show.

But then, unlike Jayson Blair or Stephen Glass or James Frey, all of whom had 'fessed up to their fakery and then slunk away to wallow in their own infamy, Daisey doubled down. On Monday evening, he appeared at Georgetown University and spoke for an hour about the scandal. (He posted the audio of that appearance late Tuesday; you can find it – and the script for his play – here.)

It turns out that he hadn't really wanted to lie, but he didn't want to upset all of those lazy journalists who interviewed him when they presumed facts that weren't actually true; so he just went along with them. On last weekend's episode of This American Life, when host Ira Glass, seething, asked him why he'd lied to him and his staff as they fact-checked his play in preparation for the January episode, Daisey replied that he had been afraid that admitting some of the specifics were incorrect would expose the entire work to accusations of being made up. He was in too deep.

Beside, as he told the crowd at Georgetown, "the truth of that story is very real. No one contests what is happening in Chinese manufacturing. Nobody." He is interrupted by applause, and is gratified, so he begins to say that he didn't just visit factories in China, he also read lots and lots of reports, and besides, to produce something that was proper journalism, "I'd have to live in China, I'd have to be a foreign correspondent. Well there ARE foreign correspondents. Where were they?!"

They were right there, actually, and they were reporting good, hard stories. But nobody was giving their work a standing ovation in an off-Broadway house, night after night. 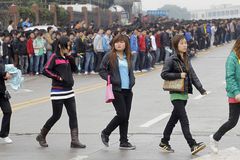 Apple needs to improve the lot of overseas workers
February 20, 2012 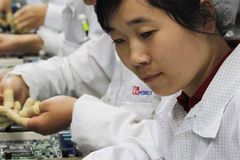