Indeed, the married Mr. Dechert e-mailed the married reporter some lines so soppy they could only have been written in the land that wickedness forgot: "You are so beautiful. I really like the picture of you by the water with your cheeks puffed. That look is so cute …" Quick, cover the children's eyes!

It's a particularly Canadian sort of "scandal." They might as well have been discussing asymmetrical federalism over a Tim Hortons coffee, climaxing in a passionate discussion about who would pay the GST on the bill.

Would it be too much to ask for our imbroglios to include a paddle or two? Some suspicious white powder? A misunderstanding of the word "insipid"? For those were the classic ingredients in a British sex scandal this week.

George Osborne, Chancellor of the Exchequer, was again faced with cocaine-and-prostitution allegations that first arose in 2005. At that time, a photo appeared in the Sunday tabloids showing Mr. Osborne, then a Tory comer, with his arm around whip-happy call girl Natalie Rowe (nom de guerre: Mistress Pain). A line of white powder was visible. At the time, Mr. Osborne denied taking drugs. This week, Ms. Rowe gave an interview to an Australian broadcaster repeating the claims that she'd known Mr. Osborne intimately. As proof of their closeness, she recalled one particularly telling detail: Mr. Osborne had called his boss, then-Tory leader William Hague, "insipid." "I didn't know what the word meant," Ms. Rowe said.

You may be thinking: Oh, please. Doesn't every British MP get issued a leather harness with his black umbrella and House of Commons pass? True, the string of sex scandals does suggest that extracurricular rumpy-pumpy is somewhat more popular than sitting through the second reading of the badger-cull bill.

Nor is that exuberance restricted to the Conservative Party. In 2006, the married MP Mark Oaten was forced to leave the race for the Liberal Democrats' leadership after engaging with a male escort in an act the Daily Mail said was "too disgusting to describe in a family newspaper." Mr. Oaten later blamed his poor judgment on a midlife crisis and his receding hairline.

You think of Britain, you think deliciously sordid sex scandal. But other countries, too, enforce national stereotypes with their political peccadilloes. François Mitterrand confirmed grave suspicions that he led a nation of marriage-flouting demi-bigamists when it was revealed he had been keeping a second family tucked away out of public sight.

And only Chef Boyardee has done more to damage the image of Italians than Prime Minister Silvio Berlusconi, the aging satyr with skin the colour of Cheez Whiz who apparently courted his underage paramours with the phrase, "Are you ready to bunga bunga?" It's not quite "I have but one life to give for my country," but the man's been busy – he had teenagers to chase, which can't be easy when his legs were six decades older than theirs.

Americans, in their shame-filled political scandals, only shore up their reputation as conflicted prudes, who stop wagging their fingers only long enough to wag their other parts. Remember Larry Craig, the Idaho senator whose arrest in an airport bathroom introduced the phrase "wide stance" into general use? An undercover cop thought Mr. Craig was signalling for illicit sex; Mr. Craig insisted his feet just naturally wandered into neighbouring stalls.

Earlier this year, the promising Democratic congressman Anthony Weiner saw his career implode. He tweeted photos of his underwear-clad privates to an acquaintance – as one does – then claimed that his phone had been hacked. He later backpedalled his way out of a job. The lesson in hypocrisy for American politicians seems to be: No one will mind your business, as long as they don't actually have to see your business.

So what has the Dechert affair taught us about Canadian misbehaviour? We're a dull people, and we transgress dully. Perhaps it's always been the case. When former MP Rahim Jaffer came under scrutiny for his involvement with (in the immortal words of the Toronto Star) "three busty hookers," what did that involvement entail? Sitting around a dinner table, talking. Possibly about asymmetrical federalism. Really, Canada, if you want to be taken seriously, you're going to have to crack that whip. 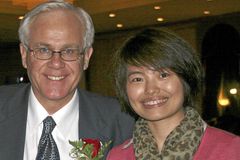 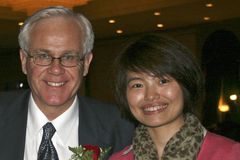