It takes a big stage to contain R. Murray Schafer. Many of his music-theatre pieces are set in the open air, in a forest, by the side of a lake (or on it), or scattered across a fairground or farm lot.

I never understood how essential the outdoors is to the success of Schafer's work till about two-thirds of the way through the first performance of his latest opera, The Children's Crusade , which took place in a disused Toronto warehouse on Saturday. It suddenly occurred to me that all of the peak moments in my experience of his theatrical work have happened outside. It's when he goes indoors that I start to squirm.

The Children's Crusade is based on medieval legends about a children's pilgrimage to Jerusalem. It's not a happy story in Schafer's telling, and in any case the story is mainly a vehicle for him to celebrate the innocent hopes of childhood and condemn the cynicism of adults.

The audience makes its own pilgrimage through the piece, walking between designer Leslie Travers's elevated stages and wooden ramps, some of which rose close enough to the ceiling pipes that the players had to duck as they passed. We saw Stephen, the Holy Child (played by 12-year-old Jacob Abrahamse), discover his mission, gather a throng, and meet various obstacles and encouragements on his doomed expedition to the Holy Land.

The Pilgrim's Progress was pretty obviously a model for Stephen's journey, which takes him to a centre of worldly power (the French king's court), a den of carnality and a place where he encounters extreme self-doubt. He finally leads his followers into the same River of Death that claims John Bunyan's pilgrims (many of whom were children).

Bunyan, however, had hundreds of pages and a deeply Christian milieu, in which to put his allegory across. Schafer had 90 minutes, which may be the limit of what you can ask from a mixed crowd with nowhere to sit. The need to compress the story and message into such a span has resulted in characters that aren't much more than animated symbols. When the Christian boy-hero chummed up with a Muslim woman (mezzo-soprano Maryem Toller) and a Jewish man (dancer David Houle) to bring peace to the Holy Land, we weren't looking at a dramatic scene, but at an image of wish-fulfilment that even Disney might find too simplistic.

Schafer's music was a fearless stew of medieval-sounding bits (played by the Toronto Consort), Arabian episodes and vivid character pieces for minor characters. In Stephen's first encounter with the Muslim woman, she sang a sinuous Middle Eastern melody with qanum (zither), to which he replied with a plain European tune accompanied by recorder and lute. A burst of Latin drums and growling brass during Stephen's flight from Travers's all-red brothel gave way to a serene patch of plainchant from a men's chorus elsewhere in the building.

The show opened with a haunting wordless women's chorus, supported by bowed percussion and musical saw, and closed with a beautiful double chorus for the women and children (members of the Toronto Children's Opera). A turgid lament sung by the brothel-keeping Old Hag (mezzo-soprano Sonya Gosse) morphed smoothly into a lullaby as she made her first advance on Stephen. Less successfully, there were several patches of what could have passed for modern Anglican choral music, and a few swerves into a Carl Orff-like style of modernist medievalism.

There were some comic moments, when the King (actor Diego Matamoros) danced a few tango steps to a medieval-sounding air on viol; when a lackey, at the king's whim, seemed to be making up his song on the spot; and when a chorus of male courtiers came to an intentionally ragged end, as if to show how ineffective these toadies were. This scene also showed off the impressive talents of the young mezzo-soprano Wallis Giunta (the King's mistress), who is plainly on her way to bigger things.

Conductor David Fallis somehow kept the 100-odd roving performers in line, while director Tim Albery and choreographer Rebecca Hope Terry found inventive ways for them to do their work on the narrowest of stages, lit under trying conditions by Thomas C. Hase. The crowd gave the piece a standing ovation, but you already knew that.

The Children's Crusade continues through June 11. 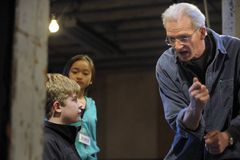