When the Oscar nominations were announced on Tuesday, Xavier Dolan didn't feel even a twinge of regret that his film, Canada's Oscar selection, I Killed My Mother (J'ai tué ma mère), wasn't nominated.

"I have no disappointment at all," he says on the phone from Montreal. "On the contrary, I would question my presence in that category. Michael Haneke [ The White Ribbon] [Jacques Audiard's] A Prophet ? Come on. One day, maybe, I can go there, but not yet. I've had this whole youth Cinderella enthusiasm working for me. I think my first movie is a good movie and I love it despite its clumsiness and flaws and everything, but I don't know that I belong with those films."

The humility sounds both genuine and mature for a 20-year-old director who has been riding extraordinarily high for much of the past year. Last May, Dolan made an international splash when his film won three of four prizes in the Directors' Fortnight sidebar at Cannes. Since then, he has won a string of festival awards, from Bangkok to Reykjavik, and a recent Lumière prize for the best French film of 2009 made outside France. Then again, Dolan's age belies his experience. He has been acting in commercials, television and films since he was 4. Creating I Killed My Mother has already occupied a substantial fraction of his life.

"Three sentences in a press kit represents three years of my life," Dolan explains. "Which is not so bad. Sometimes films take 10 years to make, but I didn't have 10 years to wait."

I Killed My Mother was adapted from the semi-autobiographical novella Dolan had written in early high school about a tempestuous young gay teenager, Hubert Minel, and his rocky relationship with his conservative, conventional mother. Dolan opted to star in the film himself, with the superb Anne Dorval in the role of the mother. He had written the screenplay at 17 during a period of unemployment and "existential angst" after he dropped out of school and was living in his own apartment, despairing of his future as an actor and immersing himself in classic cinema.

"During that period, I was renting 10 movies a week, buying another 10 and seeing 10 at the theatres. I had no other life," he says.

Much of his regular income came from providing French dubbing for English films. He's the voice of Stan in a French version of South Park, Ron Weasley in the Harry Potter movies and Jacob Black (Taylor Lautner's role) in Twilight Saga: New Moon. As for more conventional acting, he had found work increasingly drying up as he reached his teen years. He wrote I Killed My Mother with an idea of writing a role for him to play, and "as this little writing experiment, which I didn't think would amount to anything."

When Dolan finished his script, he sent it to various producers and funding agencies and met with universal rejection, but by then the experiment had turned into an obsession. Eventually, he invested about $150,000 of his own savings and "love money" from friends and colleagues. He lined up a distributor and, at one point, a producer, who later pulled out of the project. In the fall of 2008, when he was 18, he shot half the film and ran out of money. He appealed to the distributor, Seville Productions (since acquired by E1 Entertainment), saying: "You are behind this movie but not in a concrete way. Can we get some kind of help?"

Seville asked to see what he had shot so far, looked at the footage and rejected it. (The current Canadian distributor is K-Films Amérique.)

"If I don't get this film made," Dolan told his friend, the Quebec film-industry veteran Carole Mondello ( Enemies: A Love Story, The Core), "I will die."

Mondello then came on board as producer to guide him through the industry and helped him reapply to the Quebec cultural agency, SODEQ (Société de développement des entreprises culturelles). He sent them some new images from the film. On Christmas Eve, 2008, the money came through to finish the film. When it was done, Dolan decided to make one more improbable leap -- to submit it to the Cannes International Film Festival. Against long odds, his film was accepted.

Since then, Dolan has already written and shot his next film, Laurence Anyway, a story spanning two decades about a man's decision to have a sex change. Along the way, he has added the craft of editing to his credits. He edited two scenes in I Killed My Mother. He edited the new film by himself.

In the meantime, Dolan says he wants people to understand he's still a working actor.

"Maybe your article can be an ad," he says. "I want other directors to know that I'm still available for work." 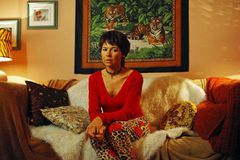 Xavier Dolan's debut wins shot at an Oscar
September 24, 2009
Xavier Dolan picks up another film festival honour
October 16, 2009
Quebec filmmaker wins three awards at Cannes
May 23, 2009
Québécois filmmaker electrifies Cannes
May 25, 2009
Time to get your domestic film fix
January 7, 2010
Follow Liam Lacey on Twitter @liamlacey
Report an error
Due to technical reasons, we have temporarily removed commenting from our articles. We hope to have this fixed soon. Thank you for your patience. If you are looking to give feedback on our new site, please send it along to feedback@globeandmail.com. If you want to write a letter to the editor, please forward to letters@globeandmail.com.
Comments are closed