A Globe and Mail series detailing the impact of the drug thalidomide that spurred a breakthrough in support for survivors has won the prestigious Michener Award for public-service journalism.

Governor-General David Johnston presented the award to The Globe during a ceremony at Rideau Hall on Thursday, celebrating the newspaper's work in giving a voice to survivors and their families who still suffer from the fallout of a public health lapse half a century ago.

The reporting, led by Ingrid Peritz, brought national attention back to an issue that had been mostly forgotten. Nine days after The Globe first published, thalidomide victims met with the federal government, which voted in a rare display of of unanimity to support compensation for those affected by the drug. Last month, the government promised survivors pensions of up to $100,000 annually for the rest of their lives.

"With great sensitivity, the series gave survivors and their families a national voice as they spoke of the growing physical, mental and financial toll on their lives. The public and political response was immediate," said a citation from the Michener Awards Foundation.

The annual Michener Award, which celebrates excellence in public service reporting on any platform, lends considerable weight to the work's impact and public benefit. It is considered among Canadian journalism's highest honours.

Five other finalist news organizations received Citations of Merit: The CBC and CBC North, The Canadian Press, L'actualité and the Vancouver Sun.

This is the 10th Michener Award won by The Globe since the prize was founded in 1970 by the late Roland Michener, who was then governor-general.

"It broke our hearts to discover the plight of the thalidomide survivors. The aim of our journalism was simple – help them achieve a just and permanent settlement," said David Walmsley, The Globe's editor-in-chief.

"The judges awarded us the Michener Award because of consistently sensitive, powerful journalism. We brought the survivors out of the shadows. How do we know this? Because in the days after the agreement on a settlement, we were told of one survivor who for the first time in years pulled open the blinds in his apartment. He felt he had purpose again. We dedicate this Michener Award for meritorious public service journalism to all the thalidomide survivors and their families."

The victims began a campaign for compensation from Ottawa last year but, as Ms. Peritz reported, "they were ignored" until The Globe exposed their plight. The federal government has announced a $180-million compensation package and issued lump-sum cheques for urgent needs.

The newspaper's reporting on thalidomide has also won other honours in recent months, including a National Newspaper Award and the Canadian Journalism Foundation's Excellence in Journalism Award for large media.

L'actualité, a Quebec-based magazine, for an eight-month investigation into the Canadian military's failure to handle complaints of sexual assault and harassment within its ranks.

CBC, for its reporting on abuses and problems related to the federal temporary foreign workers program.

CBC North, for its examination of the death of a three-month-old Inuit boy in Cape Dorset, which underscored health-care problems in Nunavut.

The Canadian Press, for highlighting the problems with Bill C-23, the electoral reform bill.

The Vancouver Sun for its investigation into the struggles of foster children after they turn 19 and are no longer wards of the province. 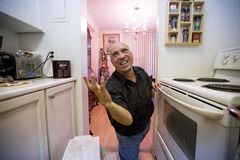 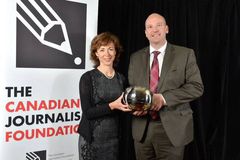