The Boards of Directors of Cogeco Inc. and of Cogeco Communications Inc. are pleased to announce the appointment of Philippe Jetté to the position of President and Chief Executive Officer of both public companies effective September 1, 2018.

Mr. Jetté has shared his passion and strong strategic vision for Cogeco since joining as Vice President and Chief Technology Officer in 2011. He was promoted to Senior Vice President, Chief Technology and Strategy Officer in 2013. In October 2015, Mr. Jetté was appointed President of Cogeco Peer 1. Mr. Jetté has held strategic positions planning and implementing sustainable, profitable business initiatives in large organizations in Canada and internationally. With PJCS Inc., his consultancy firm, as well as in previous senior roles at Rogers and Bell, he led strategic projects and initiatives deploying new technologies and commercializing regional and international communications networks. Mr. Jetté holds a Bachelor’s degree in Electrical Engineering from École Polytechnique (Montréal) where he acts as a Governor of the Alumni Association.

Cogeco Inc. is a diversified holding corporation, which operates in the communications and media sectors generating revenues of over $2.3 billion annually. Through its Cogeco Communications Inc. subsidiary, Cogeco provides its residential and business customers with Internet, video and telephony services through its two-way broadband fibre networks. Cogeco Communications Inc. operates in Canada under the Cogeco Connexion name in Québec and Ontario, and in the United States under the Atlantic Broadband name in 11 states along the East Coast, from Maine to Florida. Through Cogeco Peer 1, Cogeco Communications Inc. provides its business customers with a suite of information technology services, by way of its 16 data centres, extensive FastFiber Network® and more than 50 points of presence in North America and Europe. Through its subsidiary Cogeco Media, Cogeco owns and operates 13 radio stations across most of Québec and Cogeco News, its radio news agency. Cogeco Inc.’s subordinate voting shares are listed on the Toronto Stock Exchange (TSX: CGO). The subordinate voting shares of Cogeco Communications Inc. are also listed on the Toronto Stock Exchange (TSX: CCA). 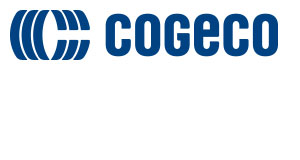