Sindy Hooper is used to gruelling physical challenges: She played a range of sports growing up in Ottawa, and over the past dozen years has conquered marathons and triathlons.

Tall, lean and muscular, Hooper is in phenomenal shape at almost 58 years old. Nearly eight years ago, however, she was thrown a huge health curveball — a diagnosis of pancreatic cancer, which generally has a poor prognosis.

But thanks to a complex surgery at The Ottawa Hospital on Jan. 8, 2013, she’s training as hard as ever and is determined to add to the more than $225,000 she’s already raised for cancer research at the hospital.

“When I was first diagnosed, I didn’t even think I was going to live that long,” says Hooper, who was told she might live just three to six months if her tumour couldn’t be removed.

Hooper has far surpassed life expectancy rates for people with pancreatic cancer, which is difficult to detect early. Despite tiredness and nausea from chemotherapy and radiation over the months following her surgery, she even continued training for the Ironman Canada triathlon in August that year in Whistler, B.C., finishing the gruelling event.

The Ottawa Hospital is one of the few hospitals in Canada that offer the hours-long Whipple surgery, whereby surgeons with specialized training and precision technical skills remove and reconstruct a large part of the gastrointestinal tract.

“A lot of people don’t really think about how important a hospital is until they need it for something like this; The Ottawa Hospital saved my life,” says Hooper in an interview from her family’s home in the Ottawa suburb of Kanata.

The pancreas, which is about 15 centimetres long and is shaped like a flat pear, is located behind the stomach. The glandular organ plays an important role in making digestive enzymes and regulating blood sugar by producing insulin and glucagon.

In 2020, some 6,000 Canadians will be diagnosed with pancreatic cancer and 5,300 will die from it, according to the Canadian Cancer Society. An estimated eight per cent of people with the disease will survive after five years. Pancreatic Cancer Canada says of all cancers, pancreatic cancer has the lowest survival rate.

Hooper is thankful for the unending support of friends and family who’ve helped her beat the odds. They include her husband, Dr. Jonathan Hooper, an intensive-care doctor and anesthesiologist at The Ottawa Hospital, and her sons, Chris, 30, and Willy, 29.

Hooper launched her first large fundraiser following her 2013 surgery, to coincide with Ironman Canada. Hooper, her husband and some friends had signed up for the competition (a 4-km swim, 180-km bike ride and a 42.2-km run) months before her diagnosis, after she had just missed qualifying for the Hawaii Ironman World Championship held each October. At first, Hooper aimed to at least complete the swim portion of Ironman Canada, but just over 16 hours later, she crossed the Ironman finish line.

In 2014, Hooper recruited 132 people to run the marathon at the Tamarack Ottawa Race Weekend held each May. Inspired by Dr. John Bell and his work in cancer research, Hooper began to raise money for the hospital. With her husband Jon serving as the marathon’s medical director, Hooper raised $111,000. Her latest fundraiser was a 50-km run on Oct. 31, 2020. The route stretched from Kanata, on paths along the Ottawa River and the Rideau Canal, wrapping up in Gloucester. This race was a “virtual” way of participating in the Tucson Marathon’s 50th anniversary in Tucson, Ariz. COVID-19 restrictions prevented Sindy from being able to participate in person.

“I had heard about Dr. Bell and his research of cancer-fighting viruses and thought, ‘He’s going to save my life one day,’ so I wanted to raise money to support cancer research at The Ottawa Hospital,” says Hooper.

A new kind of treatment

Dr. Bell is a global pioneer in researching oncolytic viruses, which have the ability to infect and kill cancer cells. The senior scientist and his colleagues hope their work will one day provide an alternative to chemotherapy, which destroys both good and bad cells, for various forms of cancer.

“Some people respond to a cancer diagnosis like Sindy did with a sort of, ‘You’re not going to take me down’ attitude,” Dr. Bell says in an interview. “She doesn’t want to lose this battle, and the fact she went out and was trying to raise money for this research means this isn’t just for her, but also for other people with these diseases.”

Dr. Bell notes his work is funded by various sources — from peer-reviewed grants to donors who support entities like The Ottawa Hospital Foundation.

“Without the donors and people like Sindy, we’d be nowhere. Only because of people’s benevolence and generosity are we able to do this work.”

Hooper had none of the main pancreatic cancer risk factors, including diabetes, chronic inflammation of the pancreas, obesity and a family history of the disease.

Born in Churchill, Man., Hooper began running in 2007 to help a friend train for a half-marathon. She so enjoyed distance running that she entered and completed the 2009 Ottawa Marathon, qualifying for her first Boston Marathon in the process. In 2009, she tackled a triathlon and never looked back.

Around her 50th birthday in December 2012, Hooper and her husband were at his workplace Christmas party when she felt a jabbing pain in her upper mid-back that came and went for about 20 minutes. A couple of days later, she felt pain high in her mid-abdomen, under her ribs. Over the next two weeks, the palms of her hands and her ears got extremely itchy, she would easily tire, had bouts of diarrhea, and had started losing weight even though she hadn’t changed her diet or exercise routine.

On New Year’s Day, she was exhausted after a 15-kilometre run with a friend. The next morning, her husband noticed her eyes were jaundiced. At first, he suspected Sindy had gallstones. The same day, she underwent an emergency ultrasound at The Ottawa Hospital.

“When the radiologist said it was cancer, it was the most horrifying feeling, like a knife went through me,” she says. “She left the room and I asked Jon if it was a good or bad cancer to get. He said, ‘It’s a bad one.’ … Jon was sitting there in disbelief. We were both crying.”

People with pancreatic cancer often don’t show symptoms until the disease has advanced. Up to 80 per cent of cases are diagnosed at later stages that are more difficult to treat.

Thankfully, Hooper was told she was among the 15 to 20 per cent of patients who are good candidates for Whipple surgery (also known as a pancreaticoduodenectomy, it’s named after Dr. Allen Whipple, a Columbia University specialist who in 1935 became the first American to perform the surgery). To be eligible for the procedure, the cancer must not have spread outside the head of the pancreas or into nearby major blood vessels. If successful, it may boost a patient’s five-year survival rate to 25 per cent.

In Hooper’s case, half of her pancreas, half of her stomach, her gallbladder, bile duct, duodenum and tumour were removed, and the remaining organs were reattached during the complex 7.5-hour procedure. After 10 days in hospital, she was sent home to recover for five weeks.

“I’m extremely grateful to have such world-class care here, from the surgeons, to the oncology and radiation specialists,” she says. She’s had three follow-up surgeries since then, all at The Ottawa Hospital.

It’s no coincidence the running team Hooper leads is called Make Every Moment Count. Her message to others with cancer is to be hopeful and live their fullest lives.

“I go for CT scans every six months,” she says. “And every time the results come back negative, I say to Jon, ‘Did they read the results properly?’ Then we plan our next six months, where we want to travel and what we’re going to do. That’s how we’ve lived for years.”

Dr. Bell, who’s based at The Ottawa Hospital’s Centre for Innovative Cancer Research, says having a lab where he frequently sees patients is a “huge motivator” to continue the immunotherapy research he began more than two decades ago.

“We’re right in the clinic and see the patients and what they’re going through. It would be a dream for all of us to say, ‘Yeah that person is alive because of what we did.’ " 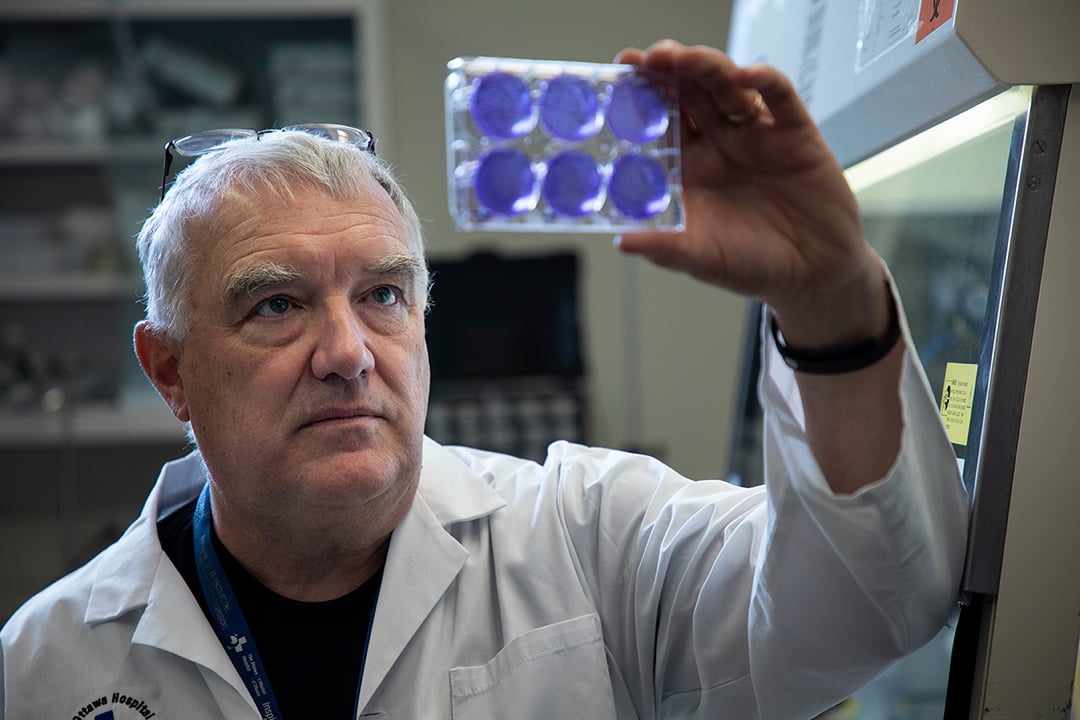 Along with his landmark work at The Ottawa Hospital, Dr. John Bell leads other important efforts to advance research into cancer-fighting viruses.

Dr. Bell is the founder of BioCanRX, a large, federally-funded national network that is conducting research on cancer immunotherapy such as oncolytic viruses and CAR-T cells.

“It’s hard to find a therapy that distinguishes between normal and cancerous cells,” Dr. Bell explains. “What we’ve done is designed viruses that are parasites only of cancer cells. … When the viruses infect a tumour, it decloaks it and makes it visible to the immune system, which recognizes things like bacteria and viruses. Once the immune system rushes in there to get to the viruses, it says, ‘There’s a tumour here that’s not normal to normal cells.’ It becomes a bystander killing, so you have direct killing of the viruses and another direct killing caused by the immune system.”

In 2011, a study led by Dr. Bell that appeared in the scientific journal Nature showed for the first time that oncolytic viruses, delivered intravenously, can consistently infect and spread within tumours without harming normal tissues.

Oncolytic virus therapy is already approved for use in the U.S. and Europe for inoperable melanoma, the most serious type of skin cancer. The drug, a modified Herpes-simplex virus called T-VEC, is injected directly into skin tumours to kill cancer cells.

Research by Dr. Bell’s team suggests a combination of two immunotherapies (oncolytic viruses and checkpoint inhibitors) could be much more successful in treating breast cancer and possibly other cancers, but more research and clinical trials are needed.

“We’re trying lots of different things to see what sticks,” he says. “We’re looking at lots of different models to find out where [these cancer-fighting viruses] are most active, and we have a lot of interest in pancreatic cancer.”

Dr. Bell, along with Dr. Carolina Ilkow of The Ottawa Hospital and other researchers in Canada and around the world, are also involved in early work to use cancer-fighting viruses to develop a COVID-19 vaccine.

Most vaccines use a weaker version of a virus to get a beneficial immune system response. But Dr. Bell and his colleagues have developed several types of potent cancer-fighting viruses they think could be repurposed, through genetic engineering, to stimulate the immune system even more to fight COVID-19.

“We’re testing it in lab models and looking for an immune response,” he says. “The next goal is to do tests to see if it’s safe, and put it to Health Canada to say, ‘What do you think?’ and hopefully do early-stage trials,” possibly in 2021.

Researchers say a COVID-19 vaccine would be particularly important for health-care workers and vulnerable populations, including people with cancer. If a vaccine is developed, large quantities could be made in The Ottawa Hospital’s Biotherapeutics Manufacturing Centre.

‘I’m fully indebted to The Ottawa Hospital,’ says Canadian injured in blast
February 8, 2021
Biotherapeutics: The future of medicine
May 25, 2021