Canada’s first bitcoin fund for retail investors is one step closer to listing on the Toronto Stock Exchange.

Investment fund manager 3iQ Corp. has fought for three years to launch a fund that will directly hold bitcoin, a virtual currency not issued by a government or central bank that allows users to transfer value to each other and pay for goods without the need for a middleman.

Earlier this year, the Ontario Securities Commission denied approval for a final prospectus for 3iQ’s product, called the Bitcoin Fund. The regulator said at the time that it was not in the public interest to approve the product because of concerns around the integrity of the market for the cryptocurrency, the security and safekeeping of the fund’s bitcoin stores, and the fund’s ability to file audited financial statements.

But Toronto-based 3iQ appealed the decision and, after conducting hearings over the summer, a panel overruled the ruling late last month, clearing the way for the investment manager to launch its fund and apply for a listing on the TSX.

3iQ’s investment product will be a closed-end fund, also called a “buy and hold” fund, rather than an exchange-trade fund (ETF). ETFs typically need to create and redeem units on a daily basis and to trade actively to meet redemption requests. In a closed-end fund, new investment capital doesn’t flow automatically into the fund, so the structure is seen as being more stable.

There is no guarantee the Toronto Stock Exchange will approve the listing application, the company says in its preliminary prospectus, filed Wednesday. The share price is listed at US$10 a unit and the prospectus has been filed with securities regulators in all provinces and territories except Quebec.

Fred Pye, 3iQ’s president and chief executive, said he expects the fund to be listed by early 2020. The investment manager is putting together a syndicate of financial-services firms, which will be led by Canaccord Genuity Corp., to market the offering. Mr. Pye said he’s hoping that two or three of the country’s biggest banks will embrace the merits of the product and join that syndicate.

“They don’t have to have an opinion on whether they like bitcoin or not,” Mr. Pye said.

The price of bitcoin and other cryptocurrencies can be volatile. In 2017, the price of bitcoin soared to US$20,000, bringing with it a wave of investor interest. But in early 2018, it plummeted to less than half of its peak and today it sits at about US$7,600.

At the peak of the hype, investment companies raced to launch bitcoin-related funds for investors, with many vying to become the first to go to market with an exchange-traded bitcoin fund. But U.S. and Canadian regulators have held off on approving bitcoin ETFs over concerns about the liquidity of cryptoassets. So far, only those funds targeting accredited investors – sophisticated investors with more than $100,000 in investable assets – have been given the green light. 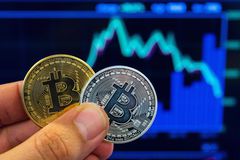