China’s tariffs in one corner of the energy market signal U.S. shale fields may follow the country’s farms as a target if a trade war escalates.

Beijing on Wednesday took aim at the United States’ rural heartland by proposing levies on politically sensitive farm commodities such as soybeans, which were among 106 U.S. products targeted. The list also included petrochemicals and liquefied propane, indicating that the world’s biggest oil buyer is willing to use energy as a weapon to retaliate against planned American duties on its high-tech goods.

While officials from the world’s two largest economies had sought to calm markets by showing a willingness to negotiate, U.S. President Donald Trump on Thursday ordered his administration to consider tariffs on an additional US$100-billion in Chinese imports. The Asian country is the biggest regional buyer of U.S. oil as well as liquefied natural gas and the critical commodities may be swept up in the trade war if tensions flare further.

“China can ditch American energy at any time because there’s plenty of supplies elsewhere, whereas for the U.S., energy is a sensitive subject,” said Will Yun, a commodities analyst at Hyundai Futures Corp. in Seoul. “The two countries may eventually come to an agreement and China may not use energy so soon into the dispute. It will use the card wisely.”

China’s Commerce Ministry said on Friday that the country would counter U.S. protectionism and “will follow suit to the end and at any cost, and will firmly attack, using new comprehensive countermeasures, to firmly defend the interest of the nation and its people.”

The soybean tariffs showed China is willing to strike the United States where it hurts, with Wednesday’s announcement ending weeks of speculation over whether Mr. Xi’s government would target the commodity that it buys in huge volumes from America and is essential to feed its citizens’ growing appetite for pork. The market reaction was immediate: the oilseed led a tumble in agricultural prices, with corn and cotton also declining.

“Moving to different sources of energy supply is unlikely to have a significant impact on industry input costs as they are commodity items,” said Stuart Orr, a professor in the faculty of business and law at Australia’s Deakin University. “It will inevitably increase the cost of energy for the growing Chinese middle-class which is rapidly adopting high-energy consuming lifestyles.”

While the proposed tariff on U.S. propane probably won’t hurt the country’s companies as much as intended, Yuanta Securities Co. predicts duties on oil will rattle investors. “If China shows its willingness to impose tariffs on crude, it will send a shock wave through markets,” said Min Byungkyu, a global strategist at the brokerage.

A surge in U.S. crude exports has helped drain inventories and prop up oil prices, which are still recovering from the biggest crash in a generation after a global glut wreaked havoc on the market. OPEC producers and allies including Russia are curbing output to shrink the oversupply, while surging output in shale fields from Texas to North Dakota threaten to undermine those cuts.

China bought about 750 million cubic feet a day worth of American LNG in the fourth quarter, the most of any country, according to U.S. government data.

The Asian nation’s imports and U.S. exports of crude and natural gas liquids “should both grow materially over the next five years, implying that the Trump administration should push back forcefully on any Chinese move to impose tariffs on energy trade if they want to reduce the trade deficit,” analysts including Christopher Main and Ed Morse wrote in the report. 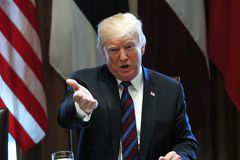 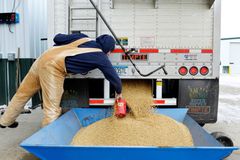