Agnico Eagle Mines Ltd. took a beating on the stock market on Friday after the company’s four-year forecast for output and capital expenditures fell short of expectations.

The Toronto-based gold miner said it is forging ahead on building two new underground mines in Canada, but gave fewer details on a number of other longer-term projects. Sean Boyd, the chief executive officer of Agnico, said in an interview that the lack of certainty is frustrating sell side analysts, who want more specificity.

“We’re not sure which projects are going to come into the pipeline, but we know there’ll be some,” Mr. Boyd said. “We’re still doing the work.”

Shares in Agnico fell by 6.2 per cent on Friday on the Toronto Stock Exchange, the worst performer by far on the S&P/TSX Global Gold Index, which tracks the 25 biggest gold companies in the world.

One of the Agnico projects where the plan is not yet set in stone is its Hope Bay mine in Nunavut, which Agnico took possession of only a few weeks ago.

Hope Bay was a disaster for the previous operator, TMAC Resources Inc. Undercapitalized and poorly designed, it was a money pit. Agnico paid $289-million for TMAC after the Canadian government rejected Chinese state-controlled Shandong Gold Mining Co. Ltd.’s attempts to buy it, because of the possible threat to national security.

Agnico had already indicated that Hope Bay was going to take time to fix, but it’s now clear the turnaround could take years, and could possibly even result in the mine being temporarily closed, especially if a fall in the gold price makes it uneconomic.

“We’ll have a much better idea this time next year,” Mr. Boyd said in a conference call with analysts on Friday.

One thing is clear: The Hope Bay site needs a new processing facility. The previous modular mill was a clunker, badly engineered and bothersome from the get-go.

“Everybody knows that at that project, the processing facility is terrible,” Mr. Boyd told The Globe and Mail. “A new one needs to be built. Why we can’t hurry is we don’t know exactly where to put it.”

Much more study, including exploration drilling, has to be done at the site to figure out where to put the mill. Either way, the capital expenditure will be considerable. The last operator estimated that a new facility would cost close to $700-million.

For the foreseeable future, Agnico has its plate full when it comes to building new projects.

At its core Canadian Malartic open pit mine, the gold is set to deplete in about two years. A new underground extension called Odyssey has been approved by the board that will push out the life of Malartic by about 17 years.

Agnico co-owns Malartic alongside fellow Canadian miner Yamana Gold Inc. The total cost for the underground buildout at Malartic is projected at $1.3-billion, with a 50/50 contribution from both parties. The price tag is significantly more than some had estimated, including Scotia capital analyst Tanya Jakusconek, who had calculated Odyssey would cost between $700-million and $1-billion.

Agnico’s board has also greenlighted the construction of an underground mine extension at its Amaruq facility in Nunavut. Budgeted at $140-million, it will add about five years to the life of the mine. 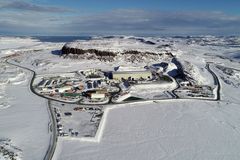