Air Canada posted a loss of $4.6-billion in 2020 because of the huge impact of the COVID-19 pandemic, but it is optimistic that talks with the federal government will yield a bailout that will place the country’s flag carrier on better footing.

Calin Rovinescu, chief executive officer of Air Canada, said on Friday that aid negotiations with the government over the past several weeks were focused on the three pillars Ottawa outlined in November. At that time, the government announced that it would begin working toward sector-specific help for Canada’s large airlines hurt by the collapse in demand for travel.

These pillars are customer refunds for cancelled flights, restoration of regional routes and support for the aerospace sector, said Mr. Rovinescu, who added that confidentiality agreements prevented him from elaborating. He said an aid model that he favoured was that of the United States, which provided payroll support and loans for airlines.

“I’m more confident that there can be an outcome than I was six months ago,” Mr. Rovinescu told analysts on a conference call to discuss the company’s financial results. “Our expectation is that there will be something on all those three that will come up.”

Canada’s largest airline said on Friday that its full-year revenue fell by $13.3-billion to $5.9-billion, compared with 2019, as passenger volume dropped by 73 per cent in what it called “the bleakest year in the history of commercial aviation.”

“While undeniably grim, results such as these are being reported the world over by our industry due to the impact of COVID-19 and government travel restrictions, quarantines and advisories,” said Mr. Rovinescu, who will retire on Feb. 15, and be replaced by chief financial officer Michael Rousseau.

Air Canada released its financial results the morning after Ottawa approved the airline’s $180-million takeover of smaller rival Transat AT Inc., with some conditions designed to protect jobs and foster competition.

The approval came despite the objections of Canada’s antitrust watchdog. In a public report issued in March and in correspondence with Transport Canada in December, competition commissioner Matthew Boswell said the combined companies would limit consumer choice and drive up prices.

The commissioner determined that more concessions were needed to address antitrust concerns in 81 markets, and that the remedies proposed by the airlines were “behavioural commitments” that were tough to monitor and enforce, said Jayme Albert, a spokesman for the Competition Bureau.

He declined to offer an opinion on the deal as approved by the government, noting that the commissioner has not been asked to assess the final amendments under the Canada Transportation Act.

The takeover, which will give Air Canada an even more dominant position in such markets as Montreal and transatlantic routes, requires the approval of the European Commission. An EC spokeswoman said in an e-mail that the antitrust investigation there remains on hold awaiting more information from the companies. “The clock is still stopped,” Maria Tsoni said.

A decision from Europe is expected in the first half of 2021, Transat said in a statement. The airline will seek an extension of the deal’s Feb. 15 deadline, Transat said, noting that the deal does not fall apart unless one side terminates it.

WestJet Airlines Ltd. responded to Ottawa’s approval of the deal with a statement that declared Canada is “closed to competition.” The Calgary-based airline lobbied against the combining of its two rivals, arguing that it would restrict choice and grant a monopoly to Air Canada in some markets. If the deal were to go ahead, WestJet had urged the government for tougher conditions, including limits on loyalty cards and the abandonment of key airport slots.

“This decision shows blatant disregard for all Canadians who believe in healthy competition,” Ed Sims, WestJet’s CEO, said in a statement on Friday. “When Canadians look to explore the world and reunite with family and friends once again, they will face fewer choices and higher fares.”

In issuing the approval, Transport Minister Omar Alghabra said Air Canada’s takeover of Transat would bring greater stability to the aviation sector amid the pandemic, and the conditions that the government applied will support international competition, routes and jobs.

Air Transat recently shut down its normal operations for the second time in the pandemic.

Air Canada has laid off more than 20,000 people, retired 79 planes and suspended several routes and airport operations to save money during a global health crisis that prompted governments to close borders and warn people not to travel.

Air Canada said it will reduce its passenger capacity in the first quarter of 2021 by 85 per cent, compared with 2019. This is a steeper reduction than it forecast in January. 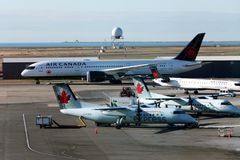 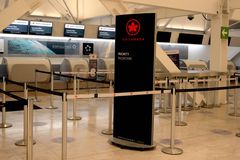