Bombardier Inc.’s bet that it stands to make more money by giving up control of its marquée commercial airliner suddenly doesn’t look so far-fetched.

It took Bombardier more than a year to sell its first 100 C Series airliners, after its board of directors authorized executives to begin offering the plane to prospective customers a decade ago. It took Airbus SE less than three weeks to do the same.

On Tuesday, Airbus struck its second major sales agreement in a week for the plane, now rechristened the A220. After announcing a 60-aircraft order from U.S. carrier JetBlue, the European manufacturer announced a preliminary commitment for another 60 planes from a group of investors planning a new U.S.-based carrier. They are led by industry veteran David Neeleman, who helped start WestJet Airlines Ltd.

“I’m not surprised” by Airbus’s sales speed since taking over the C Series program July 1, said Richard Aboulafia of the Teal Group consultancy. “It was always a good jet. The only problem was customer concern that Bombardier didn’t have the financial strength to make it a sustainable business.”

The order highlights the urgency with which Airbus is working to build up the jetliner’s order book. More volume in turn will allow the company to negotiate better terms from suppliers. Airbus executives have said they need to “drastically” cut supply chain costs on the A220 to make it viable.

Bombardier developed the C Series, its biggest ever aircraft, over several years at a cost of about US$6-billion. The project nearly sunk the company. Bombardier chief executive Alain Bellemare said he concluded upon his arrival as CEO in 2015 that the aircraft program would need a strategic partner to make it profitable and successful.

Montreal-based Bombardier held talks with Boeing Co. about partnering on the C Series and also approached several Chinese state-owned enterprises before rekindling talks with Airbus that led to the July 1 agreement, according to sources. The deal has led to a redrawing of the aerospace-industry fault lines, and has also accelerated talks towards a similar pact between Boeing and Brazil’s Embraer.

“I am very proud of what we’ve done with Airbus,” Mr. Bellemare told The Globe and Mail in an interview on July 5. “I think it’s going to be way better than people expect. And I also think that out of this other good things will come up.”

Under the partnership, Airbus takes over chief responsibility of selling and building the aircraft. Bombardier remains a minority partner, earning a portion of the revenue from sales and retaining a 34-per-cent ownership stake in the project while Quebec maintains a 16-per-cent stake.

Airbus is expected to take full control of the partnership in seven years time. Assembly of A220 planes for the U.S. market will be done at the plane maker’s Mobile, Ala., plant. The plane is the first clean-sheet design of a single-aisle airliner in nearly 30 years.

Others believe that projection is overly optimistic.

“The Airbus-Boeing duopoly’s heightened interest in sub-150-seat passenger jets does not change our view that the segment faces, at best, modest growth prospects,” Moody’s Investors Service senior vice-president Jonathan Root said in a note published on July 13. “But it does suggest that the airframers will be able to use their offerings at the small end of the narrow-body market to better meet customer needs and perhaps even benefit sales of their larger planes.” 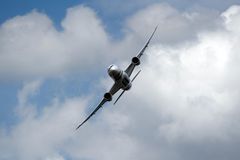 Airbus, Boeing kick off Farnborough Airshow with more than $10-billion in deals
July 16, 2018 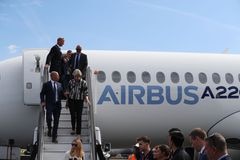 Boeing concerned about China tariff talk, but no business impact yet
July 15, 2018 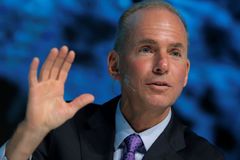