Alberta Investment Management Corp. is in talks to buy Edmonton’s newest office property, according to people familiar with the matter.

The 27-storey Edmonton Tower was put on the market earlier this year along with Stantec Tower, which is expected to be one of the tallest buildings in Western Canada when construction of its 66 storeys are completed.

The building owners, privately held Katz Group and ONE Property Management LP were hoping to fetch about $1-billion for the pair or approximately $500-million for each tower.

But the price tag was considered extraordinarily high for the Edmonton commercial real-estate market, which has never commanded the same level of pricing of Toronto and Vancouver.

Stantec Tower was reportedly pulled off the auction block around April due to lack of interest. It is not clear whether it is back on the market.

The Alberta pension fund known as AIMCo has made a bid for Edmonton Tower, which is mostly occupied by the government employees. It is not known what AIMCo has offered, but if the fund pays anywhere close to the asking price, it will be the most expensive commercial real estate deal in Edmonton’s history. The sources cautioned that the deal was not complete and could still fall apart.

Edmonton Tower and Stantec Tower are in the city’s redeveloped downtown core, which is called Ice District partially because it is built around the new hockey arena for the Edmonton Oilers.

According to a marketing brochure, the two buildings provide “income stability” that is “unrivaled,” because the city’s government and Stantec consulting firm will be occupying so much of the space.

The City of Edmonton accounts for 68 per cent of the minimum rent for Edmonton Tower, said the brochure.

“It is [AIMCo’s] type of investment because it has a government tenant. It’s stable, they are a pension fund, they have lots of money, it’s in Alberta. They are in the market,” said Howard McCann, Cushman & Wakefield’s Edmonton broker, who is not involved with the deal.

AIMCo, which has $12.7-billion of real estate assets, is headquartered in Edmonton and has been buying up office buildings. Last year, the fund bought two of Dream Unlimited Corp.’s Edmonton buildings at a deep discount.

“They know Edmonton very well. They may know the market better than the guys doing the development just because of their investments in the marketplace,” said Mr. McCann.

Although Edmonton was not hit as hard as Calgary when oil prices crashed, office vacancy rates started rising last year as new buildings opened their doors. However, the rate dipped to 15.7 per cent in the first three months of the year from 16.2 per cent in the previous quarter, according to Cushman & Wakefield.

One-third of AIMCo’s property is in office and 35 per cent in retail, according to its 2016 annual report, which is the most up-to-date document of its real estate holdings. Nearly half of its total real estate investments is in Ontario, while one-quarter is in Alberta, according to the same report.

An AIMCo spokesman would not provide further detail on its properties in Alberta and declined to comment on Edmonton Tower. Katz Group did not return calls seeking comment on the sale.

The marketing materials said Stantec Tower is 88 per cent leased. But Mr. McCann said it would be easier to sell the skyscraper when it wasn’t still a construction zone with cranes and cement trucks everywhere. 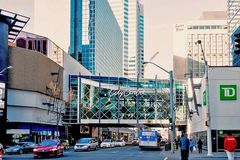