Alberta’s oil and gas industry could be on the hook for up to $70-billion in future cleanup liabilities related to oil and gas wells, quadruple the current estimate gleaned from the provincial regulator’s data, a new research group says.

The Alberta Liabilities Disclosure Project, an association of landowners, researchers, academics and environmental groups, said statistics gathered from Freedom of Information searches showed abandonment and reclamation liabilities tied to more than 300,000 producing and non-producing wells across the province standing at between $40-billion and $70-billion. That compares with a current estimate of $18.5-billion, said Regan Boychuk, the group’s lead researcher. He provided a document from an Alberta Energy Regulator (AER) official’s presentation showing that number, which is the cleanup liability tied to oil and gas wells, excluding steam-assisted oil sands production.

Bob Curran, spokesman for the AER, said the regulator had not had a chance to study the report and that it had not changed its estimates.

The disclosure project’s numbers follow an extensive investigation by The Globe and Mail late last year, which revealed that a large portion of future abandonment liabilities across Western Canada are on the books of companies that can least afford the cleanup. The Globe report also showed that 20 per cent of the wells in Saskatchewan, Alberta and British Columbia are not currently producing oil and gas – and a third of those have been idle for at least five years.

Mr. Boychuk said the group is currently most concerned with an accurate accounting of the risks, which he said the AER and the industry have consistently underestimated. However, at a minimum, its members support legislated timelines for oil companies to permanently abandon wells that are inactive, partly to prevent landowners from having to deal with environmental contamination.

It also wants the issue to become more prominent ahead of Alberta’s April 16 provincial election. The group said it wants the winning party to release its own independently verified estimates. Some of the disclosure project’s members include the Alberta Wilderness Association; retiring Alberta Liberal MLA David Swann; Mark Dorin of Dorin Land and Oilfield Management Inc.; and Robert Ascah, director of the University of Alberta Institute for Public Economics.

“The transparency is something we could all agree on, coming together as a diverse group. Awareness is starting to grow and an election is a huge opportunity for public engagement,” Mr. Boychuk said.

The AER has come under sharp criticism for approving transfers of wells to companies that do not meet its own test for financial health – a test designed to make sure that operators have the funding available to cover cleanup costs.

The issue came to a head in March, 2018, when Sequoia Resources Corp., which had amassed thousands of aging wells in several deals, declared bankruptcy. It left the AER on the hook for $225-million of cleanup costs and numerous creditors and landowners out millions of dollars in payments.

Rachel Notley’s Alberta New Democratic Party has pledged to implement timelines to clean up abandoned wells and to implement new corporate financial health measures to prevent liabilities from being dumped by healthy corporations onto companies that have insufficient finances.

The United Conservative Party has said it would streamline the process for abandonment and environmental reclamation to reduce costs and increase the rate at which wells are formally deemed abandoned. It said it would work with the AER and industry to overhaul the system to make sure liabilities are covered without discouraging investment in the industry.

The Alberta Liberals, meanwhile, have proposed that companies post reclamation and cleanup bonds.

In late 2018, a leaked presentation from an AER official pegged total liabilities for all oil and gas operations, including the oil sands and its tailings ponds, at $260-billion, a figure the regulator said represented a “worst-case scenario” of a complete and immediate industry shutdown. Its official number was about $59-billion. 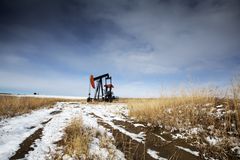