Alstom SA’s chief executive says it will take “several years” for the French train maker to fix Bombardier Inc.’s rail business, but closing local factories in Ontario and Quebec is not part of the company’s plans.

“The reality is … there is no miracle” to getting Bombardier Transportation back to making steady profits, Henri Poupart-Lafarge told The Globe and Mail in an interview ahead of the close of Alstom’s purchase of the business Friday for US$6-billion. Through the deal, Alstom will become the world’s second-largest train maker behind China’s CRRC.

Net proceeds to Bombardier are about US$3.6-billion, US$400-million less than the US$4-billion communicated in September. Bombardier said lower-than-expected cash generation at the rail business in the fourth quarter as well as “disagreements between the parties” about adjustments accounted for the lower price.

“It will take several years, three or four probably, in order to stabilize the situation,” Mr. Poupart-Lafarge said. “[But] the potential is there. And that is extremely important.”

The comments highlight the depth of existing problems at Bombardier Transportation (BT) and the scope of the challenge for Alstom, which is taking on 36,000 new employees and 63 manufacturing and engineering facilities around the world with the transaction. They could also provide some insight into why Bombardier chose to sell BT instead of its private jet unit, for which it also entertained offers.

Fight for flight in sight: Companies squabble over deal terms

BT is one of the world’s largest makers of rail equipment and continues to add new orders to a backlog that stood at US$34.1-billion as of Sept. 30. But the business has been hamstrung in recent years by problems on a series of technically complex contracts with Germany’s Deutsche Bahn and other clients that have resulted in delivery delays and subsequent financial penalties from customers.

Bombardier executives have struggled at various times to explain the source of BT’s woes. Chief executive Eric Martel last year mandated a new project team to conduct “deep dives” into its challenging projects to understand the reasons for excessive costs. He said at the time that BT had become “a build and retrofit operation, either because of late issue identification, a lack of clear accountability, or because we cut engineering resources too deeply in certain areas to meet misguided account targets.”

Mr. Poupart-Lafarge said there are no problems at BT that are unusual. “It’s more the number of difficulties rather than the nature of the difficulties,” he said.

BT operates four manufacturing and engineering sites in Canada in the Ontario cities of Thunder Bay and Kingston as well as Quebec’s La Pocatière and Saint-Bruno. Alstom has committed to developing its presence in Quebec and has announced that its regional headquarters for the Americas will be in Montreal.

Concern has mounted in recent weeks in Thunder Bay that the commitment to maintain existing operations doesn’t extend to that city’s plant. The facility was to start work this year in support of a U.S. West Coast bi-level car order expected to be completed by the third quarter and had no work planned beyond that, a BT spokesperson said in December. In 2021, the plant will be at a record low of approximately 300 employees in a building that employed 1,100 as recently as January, 2019.

Mr. Poupart-Lafarge said Alstom’s plan is to keep the combined companies’ factories across the world, adding that sales are growing and there is no reason it cannot fill its plants. He said the company’s goal will be to “be local everywhere” while trying to standardize its products and processes as much as possible.

“These factories will need to be filled with commercial successes, that’s for sure … but they should not be afraid,” the CEO said. “There will be no industrial plan [along the lines of shutting facilities]. The idea is not to lose factories.”

Jerry Dias, national president of Unifor, which represents the plant workers, said Toronto has set aside money to buy new streetcars and subway cars that could be built in Thunder Bay, but that funding for the project pledged by the Ontario and Canadian governments has not materialized. “While Rome is burning, I’ve got 1,000 jobs that are about to be lost,” he said.

Alstom will drop the Bombardier name from new rail equipment it builds, Mr. Poupart-Lafarge said. He said the company debated whether to keep it but decided to avoid confusion with Bombardier’s aviation business.

Rail manufacturing is expected to grow at a compound annual growth rate of 2.3 per cent by 2025, Alstom said Friday. The COVID-19 pandemic has forced the temporary suspension of operations at several train facilities across the globe but recent stimulus announcements by governments confirm that rail is a long-term priority for many countries as a sustainable mobility solution, the company said.

“There is a small wound but the prospects are, if anything, improving,” Mr. Poupart-Lafarge said. “[This year] looks great in most countries in the world.”

Alstom’s CEO said he feels the root cause of BT’s problems is tied to the wider pressure experienced at parent Bombardier Inc. He said signs of distress stretch back at least a decade when BT was having trouble delivering on newly won contracts after a wave of commercial success. At the time, Bombardier was starting to experience early complications in developing its C Series airliner, a program whose delays and cost overruns would eventually push its balance sheet close to the brink.

Instead of openly addressing the difficulties at BT by communicating them to the market and admitting it might need to take some loss provisions and make further investments, Bombardier took steps in the early 2010s to “hide a little bit the difficulties to avoid polluting” the broader company, which was already experiencing trouble in other areas, Mr. Poupart-Lafarge said.

Bombardier has been in “firefighting mode” trying to resolve its train delivery issues and Alstom’s aim is to give its engineers and managers “the necessary air to breathe” and implement corrective action, Mr. Poupart-Lafarge said. He said there will be extensive talks with Bombardier customers to better understand where Alstom should concentrate its early efforts.

Despite the challenges, Mr. Poupart-Lafarge said he’s looking forward to bringing BT, maker of Zefiro high-speed trains and Movia metro systems, into the Alstom fold. The business will give Alstom much greater scale in markets such as North America, Germany, Britain and China and brings a global culture that is well adapted to the changing rail market, he said.

For Bombardier, the transaction marks the end of a 50-year push into rail that started in 1970 with the acquisition of Austrian tram maker Lohnerwerke. The company is now staking its future on business jets, betting that there are enough billionaires and executives wanting to travel privately to prompt new jet orders and keep its maintenance and service centres busy.

Proceeds from the BT sale will help Bombardier address its debt near-term, said analyst Dan Fong of Veritas Investment Research. The company said Friday its pro forma net debt at the end of 2020 stood at about US$4.7-billion.

“Out of the gate, they’ll still be heavily levered,” Mr. Fong said. “But at least they’ll have a pretty good runway to ramp-up the business-jet division before additional maturities come due.” 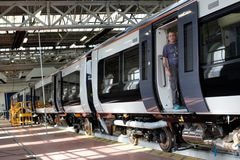 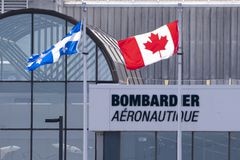 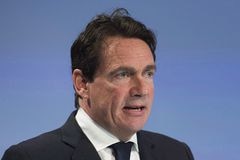