AltaGas Ltd. will open a $500-million propane export terminal next week in British Columbia, forging ahead during a time when energy projects have been cancelled or stalled in Canada.

The terminal on Ridley Island in the Port of Prince Rupert employed nearly 250 people during the 28-month construction phase and will have almost 50 full-time plant workers for the grand opening on May 28.

The Ridley Island project will be exporting propane in liquid form to Japan and other Asian markets. It marks an industry shift to emphasize new markets for Canadian propane, which is a byproduct from the processing of natural gas.

Canada’s production of propane has long exceeded its consumption, with most of the surplus going to the United States. But in recent years, with American propane output on the rise, the U.S. has been exporting record amounts of the fuel. Canadian exports “will increasingly be diverted from U.S. to overseas markets,” the Conference Board of Canada said in a 60-page report released in December on the Canadian propane industry.

At least 50 per cent of the AltaGas joint venture’s Canadian liquefied propane will be shipped to Japan-based Astomos Energy Corp.

Calgary-based AltaGas owns 70 per cent of the project while Royal Vopak of the Netherlands holds the remaining 30 per cent.

In 2016, the National Energy Board approved a 25-year propane export licence. Construction began in early 2017 on the Ridley Island terminal, which has the capacity to ship 1.2 million tonnes a year of liquefied propane.

AltaGas consulted with Indigenous leaders during the early stages of planning, including representatives from the Lax Kw’alaams Band and Metlakatla First Nation.

AltaGas chief executive Randy Crawford said the project is the culmination of strong partnerships that include governments, Indigenous groups, local communities and customers.

“We are especially appreciative of our Indigenous partners and stakeholders for their continued support of our project,” Mr. Crawford said during a conference call earlier this month with industry analysts.

The AltaGas plant and a separate propane export facility to be opened next year by Pembina Pipeline Corp. are expected to help bolster the market for propane. Calgary-based Pembina is constructing its plant on Watson Island, near Prince Rupert, while Vancouver-based Pacific Traverse Energy Ltd. aims to begin propane exports within four years from Kitimat, B.C.

Tyler Reardon, an analyst at Peters & Co. Ltd., forecasts improved prices for propane producers in Western Canada, which in the past has had a glut of the fuel.

Mr. Reardon notes that the transit time from Canada’s West Coast to Asian markets will be around 10 days, compared with the 25 days it takes for rival propane shipments to get to Asia from the U.S. Gulf Coast.

AltaGas has subleased land for its facility from coal exporter Ridley Terminals Inc.

The AltaGas plant is expected to handle up to 60 railcars a day of propane that will arrive from producers of natural gas liquids in B.C. and Alberta, using a route operated by Canadian National Railway Co.

The product will be chilled and transferred to vessels called Very Large Gas Carriers, which in turn will make the journey across the Pacific Ocean.

Ridley Terminals, a federal Crown corporation, has been undergoing a protracted sales process since 2012. In November, 2018, the federal government said the buyer of Ridley Terminals would be able to acquire 90 per cent of the coal facility, with the remaining 10 per cent of equity set aside for the Lax Kw’alaams and Metlakatla.

Besides the propane plant and coal terminal, the other main user of Ridley Island is grain exporter Prince Rupert Grain Ltd.

AltaGas also had been involved with another B.C. energy proposal, Triton LNG, but that joint venture has been suspended since 2016.

Despite the setbacks on the LNG front, Mr. Crawford is pleased to start exporting liquefied propane from what AltaGas calls the Ridley Island Propane Exporting Terminal, or RIPET internally.

“Delivering this project on time and on budget was unequivocally the top priority for our midstream business,” he said during the call with analysts. “The increasing demand for cleaner energy in overseas Asian markets positions our RIPET asset as a high-value option for Canadian producers.” 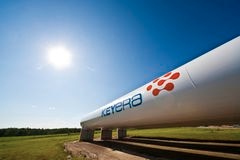 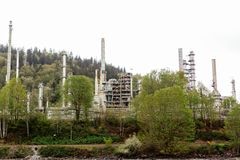