Amazon.com Inc. says it will hire 3,500 new corporate and tech-focused employees across Canada in the coming years, including 3,000 in downtown Vancouver, which would bring its total employment there to 8,000 by 2024.

The e-commerce and cloud services giant had previously said it wanted to bring its office-based work force to 5,000 people in British Columbia’s biggest city, just north of its headquarters in Seattle. But the plans are expanding as Amazon prepares to become the sole corporate tenant in the combined 35 floors of two towers on the site of Vancouver’s former central Canada Post office.

The company is taking the space in part because it sees in-person interactions as critical, even as other large companies become more flexible in work-from-home arrangements and, in some cases, sublease their spaces. In deepening its presence in Vancouver, Amazon will also likely further squeeze the Lower Mainland’s tightening market for top tech talent.

Amazon also said it would add 500 people to the 1,600 corporate employees it has in Toronto. The newly announced jobs in both cities will be in divisions such as cloud services, Alexa voice assistance, advertising, retail and operations technology.

The Globe and Mail reported last November that Amazon had agreed to lease 1.1 million square feet in The Post development, which comprises an entire city block, making room for thousands of new corporate employees in Vancouver on top of the 2,700 it currently employs in the city, including in Telus Garden, at 475 Howe St. and soon at 402 Dunsmuir St.

Although the pandemic has prompted many companies to implement work-from-home policies – including Shopify Inc. SHOP-T, which announced 1,000 jobs in Vancouver last January before becoming permanently “remote by default” – Amazon says it wants to tap into Canadian talent while giving employees the ability to work from an office when the pandemic subsides.

“What we’ve heard is that [employees] really value being able to be together, and interact in real time to solve interesting customer problems, but they also value the flexibility created by work from home," said Jesse Dougherty, an Amazon vice-president and its Vancouver site lead, in an interview.

“We look at finding solutions that provide both of those values,” he said, adding, "We like to be in the community we work in, and creating a central location helps us do that.”

The new Toronto employees will be based on five floors of a new office tower at 18 York St. – adding to Amazon’s downtown space that includes five floors in Scotia Plaza and at 120 Bremner Blvd. Both 18 York St. and The Post are owned by Vancouver’s QuadReal Property Group Ltd.

By playing host to teams from numerous corporate divisions in the rapidly expanding Vancouver office, Mr. Dougherty said, Amazon hopes employees will feel comfortable shifting between divisions and projects to remain engaged and happy. Doing so would also relieve pressure among employees to either move to a U.S. office or leave the company altogether.

In both Vancouver and Toronto, Amazon says it will hire software engineers, user experience designers, speech scientists for Alexa, cloud-computing architects and sales and marketing executives.

Amazon, whose market capitalization is more than US$1.5-trillion, says it has invested US$11-billion in Canada since 2010 – as it has both hired Canadian talent and expanded its warehouse and cloud-computing networks in the country. Including its warehouse fulfillment employees, Mr. Dougherty said the company directly employs more than 21,000 full- and part-time workers in Canada.

Local tech-sector experts said last November that the massive hiring spree is expected to trigger a talent war, boost wages and drive immigration to the Lower Mainland while putting further pressure on one of Canada’s hottest housing markets.

The massive Vancouver headcount will prompt Amazon to compete for workers with branch offices from other U.S. powerhouses such as Microsoft Corp. and Facebook Inc., and is expected to only increase the war for talent between the U.S. juggernauts and the city’s growing startup scene.

Real estate service CBRE reported last year that Vancouver has nearly 75,000 tech jobs at an average annual wage of about $84,000. The average Amazon software engineer in Canada makes closer to $99,000, according to the compensation research service PayScale.

In 2018, KPMG issued a report that found that the growth of B.C.'s tech scene was “outpacing the rate at which provincial schools and training organizations can provide new blood.”

The hiring spree could have trickle-down effects into the city’s startup scene as well. Vancouver was Canada’s third-biggest destination for venture capital investment in 2019 with $1.05-billion invested, according to the Canadian Venture Capital & Private Equity Association – behind Montreal and Toronto. It was also home to one of the country’s biggest venture deals that year – a $333.5-million growth-financing round in the legal software company Themis Solutions Inc., which operates as Clio.

Mr. Dougherty, who was born on the Sunshine Coast in B.C., said Amazon recognized that Big Tech employees often take their experience and launch startups of their own – which he said could benefit the local startup ecosystem as well.

Amazon has been on a massive hiring spree since the COVID-19 pandemic prompted a surge in e-commerce, and said two weeks ago that it soon hoped to hire 100,000 new workers in Canada in the United States.

In recent years, Amazon has faced allegations from employees of difficult working conditions. The New York Times has described its workplace culture as “bruising,” while The Guardian has described “gruelling” warehouse conditions. Reuters has reported that the government of California is investigating Amazon’s treatment of workers during the pandemic. The company says it works to keep its employees as safe as possible, has made more than 100 process changes because of COVID-19 and operates like a startup, where a focus on innovation often comes with high pressure. 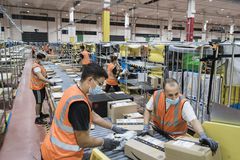