After starting new lives at the University of Waterloo earlier this decade, three brothers from Iran set out in 2015 to help others do the same. Today, they’ve helped more than 45,000 international students apply for schools worldwide – and just raised $55-million to bring that number even higher.

ApplyBoard Inc. is one of the fastest-growing young scale-ups in Canada. Its new investment round is led by Menlo Park, Calif., investment firm Anthos Capital LP, with the participation of previous investors including Palo Alto’s Artiman Ventures, and comes less than a year after the company raised a $17-million round. In the interim, it has grown to 175 staff from 60, with hopes to hire another 100 over the next year – so even though the company’s new Kitchener, Ont., office still has a “Grand opening” sign up, ApplyBoard is already considering expanding onto another floor.

More than 200 universities, colleges and high schools in Canada and the United States use its standardized application process. The company’s product is simple: Using proprietary analytics and a vast pool of student and school data, it matches supply and demand for colleges, universities and high schools. There are hundreds of thousands of spaces for international students and millions of students who want to fill them, says ApplyBoard co-founder and chief executive officer Martin Basiri.

“We put it in our mission to make this bridge as seamless as possible and make education accessible for those people,” Mr. Basiri said in a recent interview at his Kitchener office.

The CEO, now 31, first arrived at the University of Waterloo in 2011 from Shiraz, Iran to study mechatronics engineering. His brothers Meti and Massi Basiri followed him there a year later. The paperwork to get there was tough; the brothers often found themselves helping others with their applications.

In 2015, they decided to try to turn that assistance into a business. That May – almost exactly four years ago – they joined Waterloo’s Velocity entrepreneurship program and began to plan out ApplyBoard. Over the subsequent four years, more than 200 schools have adopted the company’s standardized international-student application process, while an additional 1,000 schools have partnered with the company, using its resources in conjunction with their own application processes. Of the three brothers, Martin is now CEO, Meti is chief marketing officer and Massi is chief operating officer.

Its analytics tools help predict which schools are most likely to accept a given student based on their history and credentials, while letting those students apply for multiple schools at once through the standardized application. ApplyBoard’s chief source of revenue is from schools using the service. "For schools, it’s extremely good because they only receive qualified and complete applications,” Martin Basiri said.

At $55-million, Applyboard’s raise will likely land among the largest 20 venture deals in Canada this year; in 2018, the top-10 biggest deals ranged in size from $62-million to $161-million, according to the Canadian Venture Capital & Private Equity Association.

At least one investor can already envision a public offering in the next five years. ApplyBoard’s growth is “unbelievably phenomenal,” said Brian Wilcove, a partner at Artiman Ventures LLP, which led the company’s previous fundraising round and participated in the latest. “We see a lot of companies, and most don’t even meet their [growth] plan. ApplyBoard has exceeded their plan by multiples," he said by phone.

Without confirming specific plans, Mr. Wilcove said he could picture ApplyBoard soon expanding its range of services well beyond applications to automate other student needs such as housing or financial assistance – things that can be difficult to arrange from afar. “They’re in the trust business, at the end of the day," he said – a business that could extend far beyond applications.

In an e-mail, Paul Farr of Anthos Capital LP said that his firm was eager to lead this investment round because of ApplyBoard’s “powerful” platform, strong staff, and “incredible growth profile.”

Martin Basiri said the new investment would help them hire both locally and abroad while helping the company partner with more schools. 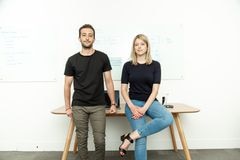 Opinion
Why Canada needs U.S. tech giants in our backyard
May 5, 2019