Argentina’s peso lost as much as nearly one-fifth of its value on Thursday despite the central bank’s hiking its benchmark interest rate to a dizzying 60 per cent as investors panicked over President Mauricio Macri’s handling of an economic crisis.

After the market close, Treasury Minister Nicolas Dujovne pledged to announce a set of new economic measures on Monday, and will target a fiscal deficit for 2019 that is lower than the current target of 1.3 per cent of gross domestic product in order to reduce the government’s need to go to debt markets.

Onerous borrowing costs combined with government spending cuts and a drought that crippled Argentina’s agricultural sector this year have slammed Latin America’s third-largest economy. It is expected to enter recession in the third quarter.

The political fortunes of Macri, who until recently had been expected to easily win re-election late next year, may also be waning.

He is likely to face mounting opposition from emboldened unions after promising further austerity measures following an International Monetary Fund warning on the government’s need to cut its fiscal deficit, with voters mindful of the 2002-2003 economic crisis and the burdensome cuts brought by past IMF deals.

“Rapid adjustment will be painful, recession could be deep, and political risk will spike amid dwindling confidence at home,” Fiona Mackie, regional director for Latin America and the Caribbean at the Economist Intelligence Unit, said on Twitter.

In an effort to stem a slide in the peso, the world’s worst-performing currency this year, and to curb inflation running at 31 per cent, the central bank’s monetary policy committee at an emergency meeting on Thursday voted unanimously to raise its benchmark rate to 60 per cent from 45 per cent.

The surprise move, however, failed to stabilize the peso. It finished down 13.12 per cent at a record closing low of 39.25 pesos per U.S. dollar, after touching 42 pesos earlier in the day.

The market turmoil erupted early on Wednesday after Macri said he had reached a deal with the International Monetary Fund to accelerate disbursement of a $50-billion loan program agreed in June, in a misguided attempt to calm investor nerves.

Instead, Macri’s admission that there was a “lack of confidence in the markets” about Argentina’s ability to finance its deficit next year sowed panic among investors. The country has $24.9-billion in peso– and foreign currency-denominated debt payments next year.

The IMF said hours later that it was considering speeding up payments because of the financial meltdown, but that Argentina needed to adopt stronger fiscal and monetary policies. Dujovne said he would travel to Washington on Monday evening to discuss the policies with the IMF’s technical staff.

The central bank auctioned $330-million on Thursday, bringing this week’s interventions to more than $1-billion. In efforts to prop up the currency the bank has sold more than $13.5-billion this year, leaving it with $54.3-billion in foreign currency reserves.

“We are convinced that these exchange rate levels exaggerate the fundamentals of the Argentine economy,” Dujovne said, adding that the country would still be “competitive” with a stronger peso. The MerVal stock market closed up 5.2 per cent, led by export-focused companies that benefit from a weaker currency.

Despite the deal with the IMF, which had calmed financial markets briefly after it was announced in June, Macri has struggled to convince investors he can restore economic growth while cutting Argentina’s budget deficit, reducing inflation and making the $640-billion economy more competitive.

Elected in 2015 on a pledge to end Argentina’s repeated cycles of crises, Macri said his orthodox policies would set the stage for sustainable growth. But the private investment he counted on never materialized while cuts to public utility subsidies jacked up water and gas bills, fueling inflation.

Although Argentina’s center-left opposition has been weakened by a series of corruption scandals, a rise in poverty levels due to soaring inflation and anger at job cuts under his economic reform is galvanizing the opposition.

“I do not have enough to make ends meet, so imagine people who make less than me,” said bank worker Julio Varela. “We are struggling and I voted for Macri!”

The country’s biggest labor group, the CGT, and other unions have called for general strikes in late September to protest Macri’s belt-tightening measures. 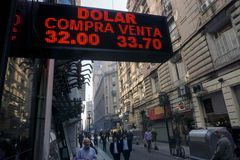 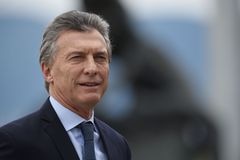