Upheaval in the federal Finance Ministry has created renewed uncertainty for business leaders awaiting the next steps in the government’s economic response to the pandemic, as control shifts to Chrystia Freeland, a close ally of the Prime Minister whose mastery of business issues is relatively untested.

Ms. Freeland, the Deputy Prime Minister, was named Finance Minister on Tuesday after Bill Morneau’s abrupt resignation Monday evening amid reported tension with Prime Minister Justin Trudeau. Mr. Morneau, who had the strongest business credentials of any current cabinet member from his career at the helm of benefits consultant Morneau Shepell, was seen as a voice of reason and fiscal restraint, acting as a counterweight to the government’s tendencies toward persistent deficit spending. Yet he exits with a mixed reputation, according to multiple senior executives who spoke with The Globe and Mail.

The Globe is not identifying those sources to allow them to speak candidly on a sensitive matter.

Mr. Morneau’s role as a counterbalance is believed to have left him increasingly isolated in the party, and some business leaders are critical of him for not prevailing more often when arguing for fiscal restraint, and for not advocating forcefully enough for business interests. He was not a natural politician, sources said, and was sometimes cautious in his stand toward corporate Canada.

The response to his successor, Ms. Freeland, is similarly fraught. She is widely viewed as capable and tenacious, and has proven successful on high-priority files for the government, including negotiating the United States-Mexico-Canada Agreement on free trade. And she is hailed as a good listener – something Mr. Morneau’s detractors suggest he wasn’t – who could be more sensitive to particular challenges confronting Western Canada, sources said.

Yet there are also concerns in corporate circles that she lacks Mr. Morneau’s grasp of business, and that she could prove more sympathetic to Prime Minister Justin Trudeau’s most left-leaning instincts, acting as less of a check on spending as the government’s recovery plans take shape.

Goldy Hyder, the president and chief executive of the Business Council of Canada, said Tuesday he is urging the new Finance Minister to plan a growth strategy for Canada that can bring back jobs, encourage investment, allow for innovation and enable a rational conversation about the transition under way in the economy from an environmental perspective.

The work that lies ahead for the Finance Minister will be challenging, Mr. Hyder said, noting that the country will have to manage the pandemic for a long period of time. “We are still very much in a crisis,” he said. “Having said that, we are in a new phase of the crisis.”

Although it is highly unusual to swap the key architect of a government’s crisis response at such a fragile stage of the recovery, the news has not unsettled markets. Derek Holt, head of capital markets economics at Bank of Nova Scotia, chalked up investors’ muted reaction to uncertainty over Canada’s policy direction.

“What markets will care about is whether [Mr.] Morneau’s resignation signals a material coming shift in the policy bias,” Mr. Holt wrote in a note to clients. “If so, then seeing more fiscal activism is more likely than seeing less.”

The federal Liberals were elected in 2015 with a pledge to balance the books by the end of their first mandate, but scrapped that plan in favour of deficit spending that amounted to roughly 1 per cent of gross domestic product. In the past six months, fiscal plans were obliterated by the unprecedented response to the pandemic, as direct federal spending on COVID-19 support exceeded $212-billion. In its fiscal snapshot, released in July, the federal government projected a $343-billion deficit for the 2020-21 fiscal year.

“It has never been a government in a rush to provide a path back to balance even before COVID-19 hit and that’s unlikely to change now,” Mr. Holt said.

He did, however, praise Ms. Freeland as “extremely capable,” and said a key consideration “will be the amount of autonomy granted to her by the Prime Minister, given how little of it appeared to have been given to Mr. Morneau.”

The first sign that Ms. Freeland is diverging from her predecessor could come this fall, when either a budget or economic update is released, Bank of Montreal chief economist Douglas Porter said. In the short term, he expects it will be “largely business as usual” for fiscal policy. However, “the more interesting question is what unfolds a year or two down the road” as COVID-19 potentially recedes from view.

Though Mr. Morneau is credited with building massive stimulus programs rapidly under extraordinary pressure, certain measures to help businesses – including aspects of the Business Credit Availability Program and a commercial rent relief plan – have been criticized as largely ineffective.

Mr. Morneau also drew the ire of Canada’s small-business community in 2017, when he proposed income-splitting tax changes that would have restricted entrepreneurs’ ability to transfer income to others and reduce their tax burdens, and those tensions persisted.

Dan Kelly, the longtime head of the Canadian Federation of Independent Business, said Mr. Morneau was the first finance minister not to take time to meet with him in nearly three decades. “He was afraid of debate,” Mr. Kelly said. “He was in love with his own views of things, and really struggled to deal with people who have a different opinion.”

Mr. Kelly said he was optimistic about Ms. Freeland’s track record in bringing together disparate voices to compromise on significant issues. With Parliament now prorogued until September, however, he said he worries that changes to important pandemic relief programs will be paused, including expanding the Canada Emergency Business Account loan program for small businesses and overhauling the controversial Canada Emergency Commercial Rent Assistance program.

Concerns about the way Mr. Morneau ran the Finance department in the early months of the pandemic, as described by Mr. Kelly, are echoed by others in the small-business sector, which contributes nearly half of Canada’s gross domestic product.

“We never could figure out who they were listening to, or how they made decisions,” said Jon Shell, co-founder of Save Small Business, a newer entrepreneur-focused lobby group that launched in response to the pandemic. “It was a black box. I think the terribly designed rent relief program that eventually came out is a direct reflection of that approach.”

With files from Kristy Kirkup in Ottawa. 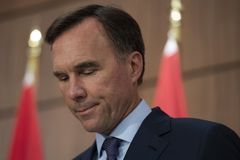 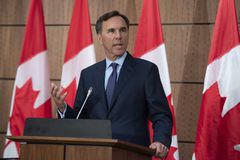 Follow James Bradshaw, Josh O’Kane and Matt Lundy on Twitter @jembradshaw @joshokane @mattlundy33
Report an error Editorial code of conduct
Due to technical reasons, we have temporarily removed commenting from our articles. We hope to have this fixed soon. Thank you for your patience. If you are looking to give feedback on our new site, please send it along to feedback@globeandmail.com. If you want to write a letter to the editor, please forward to letters@globeandmail.com.
Comments