Some retail landlords are starting to chop rents to help tenants survive as the coronavirus pandemic enters its fifth month and a flood of retailers close stores and seek creditor protection.

The Retail Council of Canada estimates that one in five stores are now vacant across all types of malls, plazas and big-box centres. A growing number of brands – including Aldo, Ann Taylor, Reitmans, DavidsTea and Mendocino – have announced plans to shutter hundreds of locations.

While the economy is showing muted signs of recovery, retail continues to languish, especially in enclosed malls. Landlords are being forced to make concessions, as they balance rental revenue and their ability to fill vacant spaces with new tenants.

“We are taking a hit like everybody else,” said Eric Carlson, chief executive officer of B.C.-based Anthem Properties, which has $5-billion in retail, office and industrial properties in Western Canada and the United States. “Retail can’t survive without customers. Every landlord will want their retailers to survive,” he said.

DavidsTea to close 82 retail locations in Canada amid COVID-19

Anthem is forgiving rent for some of its tenants that were not allowed to open. It expects grocers, liquor stores and others with strong sales to pay full rent. But after months of deferrals, Mr. Carlson has had to change course for his hardest hit retailers.

“You have to give them some slack and give them an abatement,” Mr. Carlson said. “It’s not just out of virtuous nobility that you take that. It’s rational self-interest. The more everyone does well, the more everyone comes through. The better we will all do in the long run.”

Tenants are also pushing for new rent deals that are based on a percentage of their sales instead of the standard fixed amount every month. Landlords are reluctant to provide this because the rental income is unpredictable, as well as a logistical nightmare to verify sales of privately held companies. If landlords agree to an interim period of percentage rent, they are asking for something in return, such as a lease extension.

“More of these deals are being struck,” said Jordan Karp, who heads Savills Canada’s retail unit and represents tenants and landlords. Mr. Karp said he has told landlords: “At the end of the day, do you want them to be there and operating or do you want someone brand new? A lot of landlords say, ‘I want them here, so when we come back on the other side, they are there.’”

SmartCentres REIT, which operates 165 retail plazas in the country and leases space to 115 Walmarts, has agreed to percentage rent for a handful of its tenants.

“We are customizing rent payments around the realities of each vulnerable retail tenant’s situation, giving them as much as we can, taking into account the reality of our own situation,” said SmartCentres CEO Mitchell Goldhar, adding his trust is on track to collect more than 90 per cent of the rent because Walmart and Loblaw grocery stores make up a large part of its portfolio.

Enclosed malls are in a different position. Their properties were among the last to reopen amid crowd restrictions and physical-distancing requirements. Major operators collected about 15 per cent of their rent in May and approximately 25 per cent in April, according to real estate services firm Jones Lang LaSalle Inc.

Since those dismal months, rent collection is rebounding. But it is still below normal levels. Store hours have been reduced, retailers are failing and even if they have reopened, they are attracting fewer shoppers.

On an afternoon late in July, one of the country’s most profitable malls, the Eaton Centre in downtown Toronto, was subdued. Most stores were advertising deep discounts. The food court was quiet, with staff behind counters beckoning shoppers to their restaurants and a string of eateries closed. There were lineups for a couple of brands, Apple, Lululemon Athletica and Uniqlo Co., which were restricting the number who could enter their shops. But other stores had little traffic.

“Malls have been quieter than they would have been. The less people in shopping centres, the less sales there will be,” JLL executive vice-president Tim Sanderson said. “The longer this goes on, the more people will change their shopping patterns and go online.”

Downtown Vancouver and Toronto, once hubs of activity with a giant office work force, are now mostly vacant. Street retailers in their cores that were once teeming with activity are much quieter.

“It’s pretty tough because there isn’t the volume of people coming downtown,” said Scott Lee, JLL’s executive vice-president of retail for Western Canada. “The domino effect is that people are not eating out much, not grabbing as much coffee and not shopping as much in general,” he said.

In Vancouver, at a popular shopping area on Robson Street, JLL said the vacancy rate is 15 per cent today compared with 9 per cent before the pandemic. Similarly, in Toronto, at a busy shopping area on Queen Street, vacancy jumped to its highest level in two years and rents hit the lowest since early 2016, when the brokerage started tracking rents.

“With more space coming available and fewer tenants in the market there will be downward pressure on net rental rates,” said Brandon Gorman, JLL’s senior vice-president of retail in Toronto, who represents landlords.

Mr. Gorman said tenants are looking for percentage rent deals that convert to a fixed rent at a later date, as well as later possession dates and rent-free periods.

Even strip malls, where stores such as Walmart remained open through the pandemic and others were allowed to open earlier than enclosed malls, are losing revenue. Some of the chains that typically lease space in plazas, such as Hudson’s Bay Co., The Brick, GoodLife Fitness and Cineplex Entertainment, did not initially pay the rent when non-essential shopping was closed. And because of their size, they did not qualify for taxpayer-funded rent relief for small businesses.

As of the end of July, taxpayer-funded rent relief had been provided for 63,000 small-business tenants, according to the federal finance department. However, Ottawa’s rent relief program is due to finish at the end of August after two extensions.

Major mall operators Cadillac Fairview, Oxford Properties and Ivanhoé Cambridge have provided deferrals and applied for the federal government’s rent relief. Oxford has submitted more than 1,000 applications, on behalf of mostly its small retailers. Cadillac has about 1,400 tenants that qualify for the relief. Ivanhoé had deferred rent for more than 70 per cent of its retailers at its malls.

“Brick-and-mortar stores will need to reinvent themselves, not only because of the rise of e-commerce but also because consumers’ changing lifestyles and shopping habits,” said Diane Brisebois, president of the Retail Council of Canada. 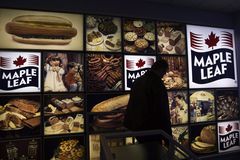 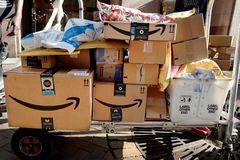